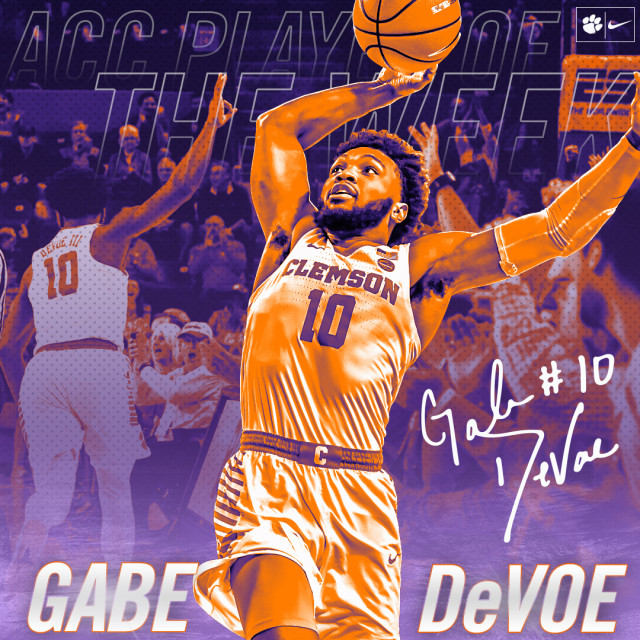 GREENSBORO, N.C. — Senior guard Gabe DeVoe was named ACC Player of the Week, as voted on by the media members, for his performance in Clemson University men’s basketball’s 2-0 week with wins over North Carolina and on the road at Wake Forest.

The Shelby, N.C. native scored 17 points on 6-for-12 shooting, including 5-for-8 from distance in the Tigers’ first win over North Carolina in eight seasons on Jan. 30. He became the first Tiger player since Terrence Oglesby in 2008 to make at least five threes in back-to-back games.

DeVoe extended that streak on Feb. 3 at Wake Forest, finishing 5-for-7 from long range in a 24-point effort. He is just the third Clemson player to have a three-game streak of five made threes in program history and the first to do it in nearly 12 seasons.

The senior was 5-for-8 in wins at Georgia Tech (Jan. 28) prior to going 10-for-15 this week. The last Clemson player to make five threes in three consecutive games was Shawan Robinson who accomplished that feat between Feb. 25, 2006 and March 4, 2006 against Virginia (5-for-8), at Virginia Tech (5-for-8) and against Georgia Tech (5-for-9). The Georgia Tech performance was on Robinson’s Senior Day.

The only other player to accomplish the feat was Michael Trait who actually had a streak of four consecutive games between Jan. 31, 1987 and Feb. 11, 1987.

DeVoe’s performance at Wake Forest was his third 20-point outing of the season. He also averaged 35.0 minutes per contest and finished perfect for the week at the foul line.

At one point against Wake Forest, DeVoe scored eight-straight points to combat a Demon Deacon late push. DeVoe’s long range sniping has now helped lead to a Tigers team that has made at least 10 threes in three consecutive games for the first time since 1983.

DeVoe is the Tigers’ second player to earn ACC Player of the Week honors and the first time multiple Tigers have claimed the award since the 2009 season when both Trevor Booker and K.C. Rivers earned the award.