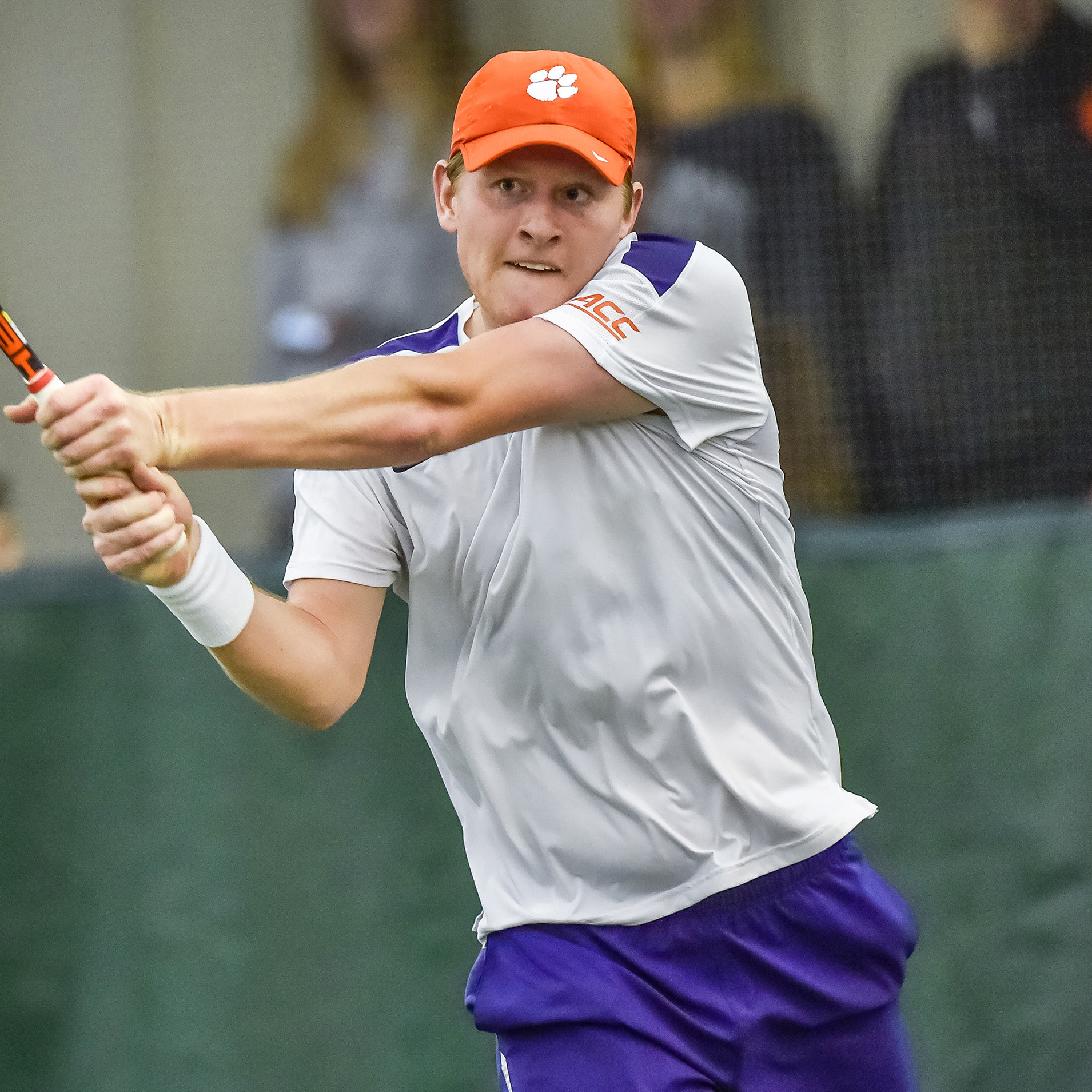 From England To Florida To CU

Luke Johnson may have started his college tennis career in Florida Gator blue and orange, but now that he is a senior in the Tiger purple and orange, he could not be more thankful for his Clemson experience.

“Clemson ticked all the boxes,” expressed Johnson of his decision to transfer to the Upstate. “It had the academics, but then with athletics, the whole department is striving to be the best. It matched my goals for coming to college.”

Before his college journey, though, Johnson grew up in Leeds, Great Britain, and tennis was a family affair for him from a young age.

“I have a sister who’s five years older than me, and she was playing tennis, and my mom played a little bit, so it was a natural thing for me to try out,” said Johnson of how he got into the sport. “I really enjoyed it, and luckily, I ended up doing pretty well through juniors, and then I could come to America. It was perfect.”

After playing for Florida during his freshman season, Johnson found himself at Clemson and has spent the rest of his career in Tigertown. The transition to college life is a difficult one for most any student or student-athlete, but Johnson expressed that he felt incredibly welcomed by the Clemson community, aiding in smoothing the change.

“It was different and difficult being away from home and having to do things on my own, but the support everyone gets, here especially, helped that,” said Johnson. “Moving away from home was the hardest part, but you’re also training and practicing like a professional athlete. And you’re doing that much school on top of that. And then having to look after yourself and being a bit more mature in your approach to looking after your body.”

Johnson started to make his impact at Clemson early in his career, and one of his proudest accomplishments as a Tiger even happened during his sophomore season.

“A big accomplishment at Clemson was when I clinched against Florida State my sophomore year,” said Johnson. “That was obviously my first season here, and it was fairly early on in the ACC season. It felt nice for me to be able to do that, because hopefully the team trusts you after that.

“It’s always tough because you don’t know how people are going to play in the big moments when you first start to be on their team. I did pretty well then, and hopefully that was calming for them to see that I could handle the pressure.”

In his final season, Johnson is one of two seniors on the team and is excited by the prospect of being able to lead the young and largely international squad.

“It’s exciting, but it also almost doesn’t feel real to be a senior already,” admitted Johnson. “It’s something that I’ve been thinking about. I want to leave here and have people say that I did good things for the team, and for my teammates to say that I was a good teammate and I always had their back.

“I want my mark to be that I was a really good teammate…that I did well for Clemson University…that I was a good leader, but an even better teammate.

“I plan on being a leader through the way I conduct myself on and off the court…trying to be someone who the younger guys can go to if they’re having any troubles or issues…trying to do the right things on the court, and then off the court in the classroom. Mainly I try to conduct myself in a manner which shows that I am a leader.”

When it comes to leading the team, Johnson said that he looks to former Clemson players like Dominique Maden and Hunter Harrington for inspiration on everything from play to lifestyle choices.

“Dom Maden and Hunter Harrington probably inspired me the most. My first year at Clemson, I lived with both of them, and that was the year they made the Final Four in the NCAA Tournament.

Johnson is grateful to both players like Maden and Harrington as well as his coaches for helping to positively define his time at Clemson.

“It’s been amazing,” expressed Johnson of his Clemson experience. “It’s changed me as a person. I feel like I came in not really knowing who I was from a tennis perspective, but also it’s helped me mature and become a better person.

“Coach (Chuck) McCuen and coach (John) Boetsch always preach that they want us to be the best we can off the court, first. They want to build us as men, first, and then tennis players. I’ve grown up as a person, and hopefully everyone else can see that, too.”

Even though he did not start at Clemson, Johnson has certainly made his place as a Tiger.

“Clemson probably would have been a better fit in the first place, but luckily I did find here, and I’ve never looked back since.”