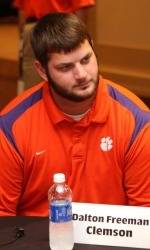 Freeman’s Father Played a Big Role in his Success

PINEHURST, NC – Dalton Freeman really did not know what to do when during his official visit to Penn State, Nittany Lions’ Head Coach Joe Paterno got down in a three-point stance, and said, “Bring it on big guy.”

So he looked over at his father, Ben Freeman, a former college football player turned high school coach at Pelion High School in Pelion, SC, and asked “What should I do?”

“He just kind of looked at me and smiled,” said Dalton to the media earlier this week at the ACC Football Kickoff in Pinehurst, NC. “He gave me the ol’ go-ahead look, I guess.”

Luckily for Dalton, not Paterno, he did not do it.

“Coach Paterno is in great shape,” Dalton recalled. “He probably would have hurt me.” It’s an experience Dalton says he will never forget. Here was this college coaching legend, the winning-est coach in the history of the game, an 80-year old man asking a 270-pound southern boy to show him what he had.

“Coach Paterno looked at me and said `I have never seen you play, but I hear you are pretty good so let’s see what you got.’ It was unbelievable. We still laugh about that,” Dalton said. “I didn’t know what to do. I froze! I think anybody would.”

The Paterno incident is just one of the many experiences Dalton has enjoyed with his father. A man he calls his hero.

“Just to be able to go through the whole recruiting process and taking him along with me, I don’t know what I would have done without him.”

Ben, who played football at Wake Forest back in the early 1980s, has always been there for his two sons. His oldest son, Justin, went on to kick for Newberry College in the early 2000s and Ben was there to watch him play too, even if Pelion had a game the night before.

He has done the same with Dalton, and played a big role in why the 6-5, 285-pound center came to Clemson in the first place, or for that matter even played football. After a bad football experience as a seventh grader, Dalton nearly passed on the sport that has run through three generations in his family.

Dalton’s grandfather played at North Carolina and Appalachian State back in the day.

“I didn’t have a great year, and I remember coming home and telling my dad `I don’t know if I like football. This isn’t for me. I don’t like getting beat up like that every day,'” Dalton recalled. “He told me I had to be patient. That’s when he really started coaching me.

“I went back my eighth grade year. I had an awesome year. He was always there to guide me and push me down the right path. I can’t thank him enough. I definitely would not be where I am without him.”

A three-time academic All-ACC at Wake Forest, Ben took over as head coach at Pelion in 1990, just before his youngest son was born. The Panthers were 0-10 at the time, but after changing the culture of the program and getting the kids to believe they can do anything they put their minds to, Pelion started to win.

By the year 2000, the Panthers were a state power in Class AA thanks to a perfect regular season and its first region title. Since then the Panthers have been perennial playoff contenders.

Dalton, who remembers idealizing guys like Josh and Justin Stepp and his brother, was a water boy in those days and loved every minute of it.

“That was something I got to grow up and watch,” he said. “I got to watch the whole culture change. It is ironic because that is kind of what is happening at Clemson. We have always won some games, but the culture, the family atmosphere, the players and the relationships, that was something Coach (Dabo) Swinney and my Dad had to build up, and they both have done a very good job of that.

“I enjoyed being a water boy at Pelion. From running the balls in, to the water, to the towels, whatever needed to be done, I was right in the middle of it. Probably more than I should have been. I had a lot of fun.”

But Dalton soaked up what he was around and by the 10th grade was starting at guard for his father. As a three-year starter, he became an All-State selection and was named as one of the top guard prospects in the country.

Soon enough, Dalton was being recruited heavily by big-name schools such as Florida, Florida State, Georgia, South Carolina, Tennessee and of course Penn State. Again, Dalton says his father played a big role in helping him narrow down his options, while keeping his eyes open and doing things in the best interest of him.

“Going through that whole recruiting process was definitely a blessing for me,” Dalton said. “I could not have done any of that without my Dad. He definitely kept me grounded and he told me what to watch out for.

“It was a lot of fun to be able to share some experiences like Coach Paterno that with him. I’m just so blessed to have him as my father. Every walk of life he has done. That is why I respect him so much. He has been successful in everything he has done.”

And though he played for Wake Forest, Ben never once pressured his son to go to his alma mater. Instead he let Dalton make his own decision after he had all the facts in front of him.

“He never pressured me in any kind of way,” the redshirt junior said. “When I told him what I wanted to do, he was 100 percent confident that coming to Clemson was the right decision. It was a lot of fun.”

Since coming to Clemson, Dalton admits it has been fun reuniting with Justin Stepp, who was an All-SoCon selection as a wide receiver at Furman in 2005 and 2006. Stepp is in his third season as a graduate assistant for Head Coach Dabo Swinney.

“He is another guy I look up to,” Dalton said. “You have to remember in that 2000 season, I was 10 or 11 years old. I was running balls in, and towels to wipe off his gloves. So watching him play at Furman, and now to be back here, and he is watching me play, it is kind of surreal. It’s an awesome experience. The Lord works in mysterious ways, and it has really been a blessing.”