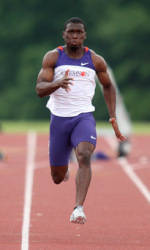 DES MOINES, IA – Clemson Junior Warren Fraser qualified for the Olympic Games with an “A” standard time of 10.18 in the first semifinal of the 100-meter dash on Wednesday, the first day of the NCAA Outdoor Track & Field Championships. The women’s team qualified two athletes for finals, as well as the 4×100-meter relay, at Drake Stadium.

Fraser finished 13th overall and while he did not advance to Friday’s final, he was thrilled with the news that he will be making his first trip to the Olympics to represent his country in August.

“I feel a big relief,” Fraser said. “When I heard Coach (Tim) Hall yell out the time, I sighed. My start was good, but I could have done even better. I wanted to do well and make the final, but I’ll learn from it and excited to hit the Olympic mark.”

The women’s 4×100-meter relay got the day off to a good start with a school record (43.43) in the opening semifinal. Clemson was second to LSU and fourth-best overall. The final is set for Saturday at 11:10 AM Central time. For the second time this season, the Tigers utilized the lineup of Stormy Kendrick, Marlena Wesh, Dezerea Bryant and Jasmine Edgerson.

It will mark the third straight season the Tigers have advanced to the championship final in the 4×1. The common denominator each year has been Edgerson, who was celebrating her 21st birthday Wednesday.

Wesh went on to compete in the first semifinal of the women’s 400 dash just over an hour later. She was third on the backstretch, but a late push and fall across the finish line wrapped up a berth in the final at 52 seconds flat. She was sixth-fastest overall and will run the final Friday at 7:02 PM CST.

“Today was just about making it to the finals,” Wesh said. “I can guarantee we won’t see some of the times we saw today in the finals. In the open 400, I lost my balance a little bit, but was just thinking top two (positions), so I dove for it!”

Alyssa Kulik qualified for a second straight year in the women’s steeplechase. She had a time of 10:00.27, third-best of the day. Kulik was fourth in the final a year ago. Her final is set for Friday at 6:30 PM CST.

“It was not supposed to be super-fast today, so getting in that top five in my heat was the goal,” she said.

Keni Harrison was 13th in the women’s 400 hurdle semifinals. The freshman out of Clayton, NC produced a time of 58.03 in the third and final heat, but did not advance to the final. She will be one of four Clemson athletes in the women’s 100 hurdles on Thursday, however.

Chris Slate closed out his career on Wednesday at his first NCAA meet. He was 21st with a time of 1:50.09 in the 800 meters. Slate was a four-time all-conference runner for the Tigers over his career.

Christy Gasparino also competed in her first national championship meet Wednesday. The sophomore out of Darien, CT cleared the opening height of 12’9.5″ in the pole vault, but missed three tries at 13’3.5″. She was 19th out of 24 competitors.

The teams return to action Thursday. The first scheduled event for the Tigers at Drake Stadium will be the women’s 200 dash semifinals, featuring Bryant, at 5:45 PM CST.