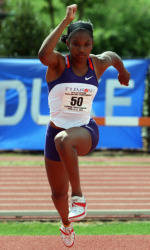 ATLANTA – Josh Fowler of the men’s track & field team and April Sinkler from the women’s squad captured event championships in the jumps on Saturday to pace Clemson’s efforts in a duel meet with Georgia Tech and Kennesaw State. Sinkler continued her outstanding season by winning the high jump and long jump, while Fowler won the triple jump over a hometown favorite at Georgia Tech’s outdoor track facility.

Fowler was the biggest surprise of the day for the Tigers. After a third-place showing (24’5.5″) in the long jump, he made his mark in the Tiger record books in the triple jump. Going up against Georgia Tech star Alphonso Jordan, the Inman, SC native held his own and moved to the front of the field on his fourth and final jump when he hit a personal best 51’3.5″. His mark was enough to earn the victory and was actually the fourth-best triple jump effort in Clemson’s decorated men’s track & field history.

Sinkler, named the ACC’s Most Valuable Field Event Athlete two weeks ago, was at full strength Saturday for the women’s team. She won the high jump and long jump, with outdoor personal bests in both events. She first took the long jump crown with a jump of 21’1.25″, before moving on to the high jump. Sinkler came down to her last attempt at 6’0″, but she showed her mettle by becoming the first female in school history to surpass the six-foot barrier in the outdoor version of the event.

Kim Ruck and Bethanie Wachna won events for the women’s team Saturday. Ruck took home the 1500m title after posting a time of 4:34.16, while Wachna won the javelin with a throw of 149’0″.

Candace Sapp (2:16.24) was fourth in the 800m run. Mycaiah Clemons was third in the 100m hurdles after crossing the line in 14.45 seconds. In the field, Caroline Kennedy was runner-up in the pole vault after matching her school record in the event by clearing 12’11.5″. In the discus, Brittney Waller was second after a throw of 142’11”.

On the men’s side, Chris Slate won the 800m run with an outstanding showing. The Delaware native had a time of 1:50.25, a personal best and the ninth-best time in Clemson history for the event. Clemson’s other male winners Saturday included Chris Spear in the pole vault (15’5″), Alex Padgett in the shot put (54’0″), and Zach Berg in the hammer throw (204’9″). Padgett was also runner-up in the hammer throw (182’7″).

Miller Moss had an active day, competing in several events. He was runner-up in the javelin throw with a mark of 149’6″. Moss was also fourth in the long jump with a solid effort of 23’3.5″. He established the Clemson record for the decathlon just two weeks ago at the ACC Championships.

Clemson’s teams return to action next weekend for the final home meet of the 2010 season, the Orange & Purple Classic.