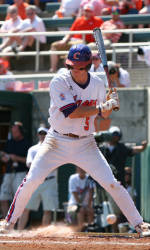 Clemson, SC – Mike Freeman, Graham Stoneburner, and Matt Vaughn were all named to the All-ACC Academic Baseball team, released by the ACC Office on Thursday. To be eligible for consideration, a student-athlete must have earned at least a 3.0 GPA for the previous semester and maintained at least a 3.0 cumulative GPA during the academic year.

Freeman, a junior infielder majoring in financial management who made the All-ACC Academic team for the second year in a row, was selected in the 36th round by the Arizona Diamondbacks. In 2009, he batted .328 with 60 runs, 88 hits, 16 doubles, five triples, four homers, 44 RBIs, a .414 on-base percentage thanks to 42 walks, and 11 stolen bases in starting all 66 games at second base. He led or tied for the team-lead in games, starts, at-bats (268), runs, and triples.

Stoneburner, a sophomore righthander majoring in management who also made the All-ACC Academic team for the second time, was drafted in the 14th round by the New York Yankees. Stoneburner, who red-shirted in 2007, had a 7-4 record, 3.52 ERA, and one save in 64.0 innings pitched over 20 appearances (seven starts) in 2009. The Richmond, VA native gave up 70 hits (.283 opponents’ batting average), 19 walks, and only two home runs with 71 strikeouts. He tied for the team-lead in wins and had an outstanding 3.74-to-1 strikeout-to-walk ratio.

Vaughn, who graduated in May with a degree in management, was one of Clemson’s best pitchers late in 2009, as he made 22 relief appearances for a total of 35.1 innings pitched. He was 4-1 with a team-tying-high four saves and 24 strikeouts and only allowed seven extra-base hits. He also earned a win in both of Clemson’s victories over South Carolina in 2009. Vaughn, who was a four-time member of the ACC Academic Honor Roll, had 16 career saves, tied for fourth-most in Clemson history.