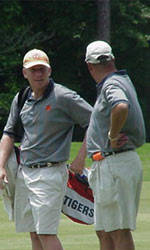 Four Tigers Advance To Match Play At US Amateur

Clemson, SC – Four members of Clemson’s NCAA runnerup men’s golf team advanced to the match play portion of the 2001 US Amateur on Tuesday. All four players finished in the top 20 of the 36-hole stroke play competition. The top 64 players move from the stroke play to match play on Wednesday.

John Engler a three-time All-American for the Tigers, made the biggest move on Tuesday, firing a six-under-par 66 on the Druid Hills Course. It gave him a two-day total of 136, six-under-par and a tie for fourth place. Engler’s round included an eagle three on the ninth hole.

D.J. Trahan fired a strong 68 on Tuesday on the Druid Hills Course and stood tied for 8th after 36 holes with a 137 total. Trahan is attempting the career amateur double. He won the United States Public Links championship in 2000, now is attempting to capture the US Amateur.

Lucas Glover, the individual leader after the first round with an eight-under-par 64, shot a 74 on Tuesday, but still had plenty of room to spare as far as making the top 64. The native of Greenville had a 138 total through the 36 holes, good enough for 11th place.

Matt Hendrix, a red-shirt sophomore on this year’s team, had a one-under 69 on the par 70 East Lake Course on Tuesday and stands tied for 20th with a 141 total. His round on Tuesday included a 32 on the front nine.

Martin Catalioto, who will be a freshman at Clemson this year, and Michael Hoey, the reigning British Amateur champion and a member of the Clemson team from 1998-00, failed to make the cut. Catalioto shot a 81 on Tuesday and finished at 152, while Hoey shot a 75 and finished at 146. The cut came at 144.