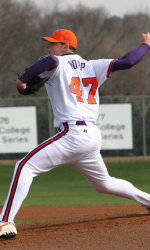 With the win, the Patriots (1-1) evened the series at a game each. It was also George Mason’s first-ever win over the Tigers (1-1) in eight all-time games.

Modica (1-0) pitched 6.0 innings, allowing one hit and one earned run. Modica combined with relievers Jason Koziol and Jordan Flasher to limit the Tigers to just two hits a day after they totaled 20 in a 14-0 victory.

In his first outing as a Tiger, reliever Brock Schnabel (0-1) surrendered three runs on two hits in 0.1 innings pitched and took the loss for the Tigers. Clemson starter David Kopp pitched 5.0 scoreless innings of four-hit ball with five strikeouts as well.

The Tigers opened the scoring in the bottom of the fourth inning. Brad Chalk walked to lead off the inning, advanced to third on Taylor Harbin’s double off the top of the fence in left-center, and scored Clemson’s only run on a sacrifice fly by Andy D’Alessio.

Schnabel was brought in to relieve Kopp in the sixth. Chris Fournier doubled to lead off the inning and scored on an RBI double by Chris Romanow to left-center. Scott Krieger followed with a walk, and two batters later, junior Alan Farina entered the game. Bour hit the first pitch he saw from Farina over the fence in left field for a three-run homer, giving the Patriots a 4-1 lead.

Brent Weiss singled to open the seventh inning. Wiggins reached on fielder’s choice to first, as Weiss advanced to second on a throwing error by D’Alessio. Weiss later scored on a wild pitch, giving George Mason a 5-1 lead.

Saturday’s loss ended Clemson’s home winning streak at 17 games. Brad Chalk hitting streak also ended at 17 games, as he was 0-for-2. He still reached base via a walk (twice), upping his consecutive game streak of reaching base by either a hit or walk to 29 games.

Clemson and George Mason will play game three of the series at 12:00 pm Sunday.