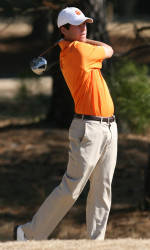 CLEMSON, SC – Former Clemson golfers Ben Martin, Tommy Biershenk, Brent Delahoussaye and Elliot Gealy all moved on to the third stage of PGA Tour qualifying with outstanding performances in the second stage of qualifying last weekend. They will be joined by Kyle Stanley and Charles Warren at the final stage.

The final stage of PGA Tour Qualifying will take place on two courses at Orange County National Golf Club in Orlando, FL December 1-6. It is a six-round qualifying tournament with no cut.

Biershenk finished first at the second round site at the TPC Craig Ranch Course in McKinney, TX. He had a score of 270 for the three days, including a final round 65 that gave him the victory by three shots. He had 13 birdies and an eagle over the last two rounds.

Martin finished third with a 16-under par score of 272 at the Southern Hills Plantation Course in Brookville, FL last week. The native of Greenwood, SC who played in the Masters last year had rounds of 66-69-72-65. He had eight birdies in the final round, including five of his last eight holes.

Delahoussaye, who played on the PGA Tour last year after going through the qualifying process, finished eighth at the Hombre Golf Course at Panama City, FL with a three-under-par score of 281. He had rounds of 73-66-70-72.

Former Tigers D.J. Trahan, Jonathan Byrd and Lucas Glover all qualified for the 2011 PGA Tour by finishing in the top 125 in 2010. Trahan finished 47th, Byrd was 55th and Glover was 57th.