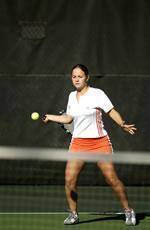 Clemson, SC – Four members of the Clemson women’s tennis team will begin play on Tuesday, October 5 at the 2004 Riviera/ITA All-American Championships at the Riviera Tennis Club in Pacific Palisades, CA. Daniela Alvarez, Maria Brito, Julie Coin and Romy Farah will all compete in the qualifying doubles tournament, while Alvarez and Brito will also participate in the qualifying singles tournament.

Brito will face freshman Riza Zalameda from UCLA in the first round. Brito is ranked 70th in the preseason Intercollegiate Tennis Association poll. Alvarez will square off against 77th-ranked Suzanna Lingman, a senior from Harvard, in the opening round. In the ITA’s preseason poll, Alvarez is ranked 50th. Eight players from the field of 64 will advance to the main draw of the tournament to be held on October 7-10.

In doubles competition, Brito and Alvarez will team up to face Eva Dikes and Bianca Dulgheru of Pepperdine in the opening round of the qualifying doubles tournament. The Tiger duo is ranked 21st in the ITA preseason poll. Dikes and Dulgheru advanced to the qualifying rounds after winning their three matches in the October 2-4 prequalifying round. In their first match of the tournament, Coin and Farah, who are ranked 29th, will face 33rd-ranked Nancy Kockoff and Julie Smekodub from Tulane. Of the 32 doubles teams in the tournament, four will proceed to the doubles competition of the main draw on October 7-10.

Coin will not begin singles competition until the October 7 main draw, where she is the fourth seed overall.