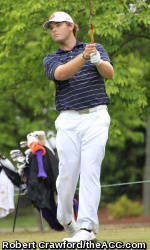 CLEMSON, SC – Four Clemson golfers have been named to the Division I Ping All-Region team by the Golf Coaches Association of America. Clemson had four of the 25 players selected to the East team. Georgia Tech had the most selections with five, while Clemson and Duke were second with four selections apiece.

Clemson players named to the team were senior McCuen Elmore, juniors Corbin Mills and Crawford Reeves and freshman Billy Kennerly. It is the most all-region selections for the Clemson program since 2010 when Clemson also had four.

Mills, Clemson’s top golfer this year in terms of stroke average with as 71.30 figure, was selected for the third straight year. The junior from Easley had three top 10 finishes and a team best eight rounds in the 60s. He was also a first-team All-ACC selection.

Reeves only played in the spring, but had a 71.62 stroke average, second best on the team. He had five rounds in the 60s and 13 rounds at par or better. Reeves was Clemson’s best player at the NCAA Regional with a 14th place finish and he also recorded two top five finishes in the spring.

Kennerly made the All-Region team as a freshman. The native of Alpharetta, GA was Mr. Consistency as a freshman as he scored at 75 or better in 27 of 33 rounds this year. His score counted towards Clemson’s team score 29 of 33 rounds, a big contributor to his 72.73 stroke average, third best on the team. He had nine straight top 25 finishes during the season.

Elmore made the team for the first time as a senior. He finished with a 73.12 stroke average, and had five top 25 finishes. He finished the year with a team best 110 birdies.