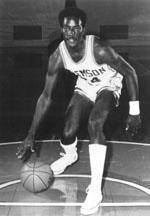 Craig Mobley, Clemson’s first African-American scholarship student-athlete, will make the ceremonial center-jump toss to open the Clemson vs. Morris Brown game on Saturday. Tipoff is schedule for 4:00 PM. Mobley was invited to campus in conjunction with the Martin Luther King holiday, which will be celebrated on Monday.

Mobley came to Clemson in the fall of 1969 when he was recruited by the late Bobby Roberts. He was a member of the Clemson basketball program as a freshman and sophomore. He decided to give up the game at the varsity level to concentrate on his studies after his sophomore year.

Currently, Mobley owns Magna Enterprises Construction Company in Los Angeles, CA. He is also the chairman of the LA Watts Summer Games, the largest high school competition in the nation. Mobley directs an event that features over 7,000 high school students, 200 schools and 400 teams from throughout Southern California.

Mobley received a commission as a 2nd Lieutenant in the U.S. Air Force and was promoted to Major. He served as a space radar operator for several years before earning two masters degrees, one in Business Administration and the other in System Management. His military experience provided an opportunity to coach military basketball teams, and this experience transferred over to Middlesex Community College, in Massachusetts where he coached both men’s and women’s Junior College Basketball.