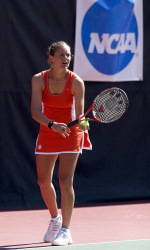 Former Tiger Julie Coin Advances at the US Open

Former Tiger Julie Coin Advances at the US Open

NEW YORK – Julie Coin defeated Eva Hrdinova of the Czech REepublic 6-3, 6-3 in the first round of the U.S. Open on Tuesday afternoon. She advances to play the #13-ranked player, Nadia Petrova of Russia. Coin has now won her first round match in each of the past two years and has won at least one match in four of the past five Grand Slam Events.

Both Coin and Pterova advanced to the third round in 2008, after Coin knocked of then #1 Ana Ivanovic. Since then, Coin has climbed to #60 in the world, and a win would likely boost the career-best ranking even higher.

In addition to singles, Coin will also participate in doubles for the first time in her career at a Grand Slam Event. She will team with Marie-Eve Pelletier of Canada. They play against Laura Granville (USA) and Vladimira Uhlirova (CZE) in the first round.

Coin led Clemson to back-to-back NCAA Final Four appearances in 2004 and 2005 and reached the semifinals of the NCAA Singles Championships in 2004. She was ranked as high as #2 in the ITA Tennis poll during the 2005 season and earned All-America status three times over her career. She also helped the Tigers claim the 2004 ACC Championship and was named the conference Player-of-the-Year that season.