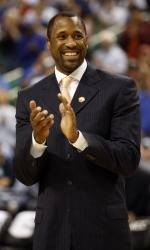 CLEMSON, SC – Former Clemson All-ACC player and 10-year NBA veteran Greg Buckner has been named a player development coach with the Houston Rockets. This will be Buckner’s first experience in coaching after he retired from the NBA after the 2008-09 season.

Buckner helped Clemson to three NCAA Tournament bids from 1996-98 and is regarded as one of the top players in Clemson history. He led Clemson in scoring and rebounding as a freshman in 1994-95 when he was named the ACC Rookie of the Year, the only Clemson player so honored.

He then made second-team All-ACC as a junior and a senior. He finished his career with 1754 career points, fourth in school history, and is the co-holder of the Clemson mark for double figure scoring games with 97. He started all 122 games of his career and never missed a contest.

Buckner played 10 years in the NBA with Dallas, Denver, Philadelphia, Minnesota and Memphis and scored 2878 points and had 1593 rebounds. He averaged a career high 6.7 points per game for Denver in 2005-06. For his career he averaged 5.0 points per game and shot 76 percent from the foul line. He was regarded as one of the top defensive players in the league over his career.