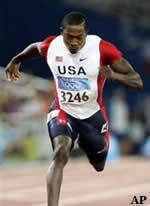 ATHENS, GREECE – Former Clemson track and field standout Shawn Crawford fell short in his bid for an Olympic medal in the 100m on Sunday. Crawford finished fourth in the finals of the event, recording a time of 9.89 in the fastest 100m final in Olympic Games history. He will continue his quest for an Olympic medal on Tuesday, Aug. 24, as the qualifying rounds of the 200m dash begin.

Cydonie Mothersill, a former Lady Tiger NCAA Champion in the 200m, advanced to the second round of that event with a heat-winning time of 22.40. She will compete in the second round on Monday evening. While competing for Clemson, she was a four-time All-American and six-time ACC Champion. Mothersill is a member of the Clemson record-holding 4x100m and indoor and outdoor 4x400m relay teams. She also holds the school records in the 100m and 200m indoor and outdoor, and was named to the ACC’s 50th Anniversary team.