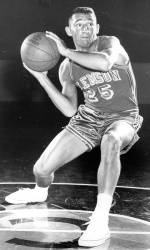 CLEMSON, SC – Former Clemson basketball player Sam Cohn passed away on May 28 in Dallas, TX. Cohn, who played for the Tigers from 1963-66, is survived by his wife of 38 years, Jill, son Eric, daughters Carey and Erin, and grandchildren Matthew, Colby and Connor. The funeral service will be held at 12:30 PM on Saturday, June 2 at Restland Memorial Chapel in Dallas.

Cohn appeared in 17 games and helped a pair of Tiger teams (1963-64, 1965-66) to 8-6 records against ACC competition. He played alongside Randy Mahaffey, who was named to Clemson’s all-time team in conjunction with the 100th anniversary celebration this past season.

He went into the Air Force following graduation from Clemson and was a veteran of the Vietnam War. In 1971, he was headed to be an assistant coach at Clemson when he met Don Ogden, who was an executive with a startup airline, Southwest Airlines. Cohn was offered a position, headed to Denver, CO for jet training, and was one of the original 20 pilots for Southwest Airlines.

He retired in 2001 after 30 years as Southwest’s No. 2 pilot. Cohn became a fundraiser for Challenge Air, a mentor and scholarship-based organization that took challenged children on flights.

In 2010, Cohn returned to Clemson to attend the basketball alumni reunion with nearly all of his former teammates and witnessed the Tigers’ 74-66 win over Miami.