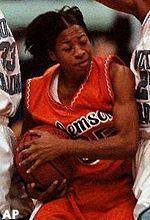 Two former Clemson basketball standouts will compete at the 2004 Olympic Games set to begin Aug. 14 in Athens, Greece. Itoro Umoh-Coleman and Iker Iturbe have been selected to the Nigerian and Spanish national teams, respectively. The women’s team from Nigeria will begin competition on Aug. 14, as they face Australia in the first of five preliminary round games. On Aug. 16, Nigeria will play Japan, then take on Greece on Aug. 18. Nigeria’s preliminary schedule will continue with Brazil on Aug. 20 and conclude with Russia on Aug. 22. Spain’s men’s team will begin group A preliminary round play against the People’s Republic of China on Aug. 15. On Aug. 17, Spain will play Argentina, then face Italy on Aug. 19. Serbia and Montenegro and Spain will play on Aug. 21, then conclude preliminary round play on Aug. 23 against New Zealand.

Umoh-Coleman is entering her third year as an assistant coach for the Lady Tigers, having returned to her alma mater in 2002. She lettered for the Lady Tigers from 1995-99, and helped lead Clemson to the ACC Championship in 1996 and 1999. The Lady Tigers also advanced to the NCAA Sweet Sixteen in 1999. She completed her career in ninth place on the Clemson career list for most points scored with 1,409 and was named to the ACC’s 50th Anniversary Women’s Basketball Team. Umoh-Coleman ranks third on the Lady Tigers’ career list for steals with 265 and also for assists with 459. She was tabbed an AP honorable mention All-American and played in the Pan-Am Games and All-Africa Games for Nigeria in 1999. Umoh-Coleman also holds the distinction of being the first Lady Tiger named to a WNBA active roster in 2000-01. She played with the Indianapolis Fever as well as the Houston Comets.

Iturbe, a native of Vitoria, Basque is making his first Olympic Games appearance for Spain. He lettered for the Tigers in 1994-95 and 1996-98, playing in 91 games for Clemson. Over his four year career, Iturbe averaged 6.1 points and 3.5 rebounds per game. He started at center for the Tigers during the 1994-95 campaign when Clemson advanced to the NIT. In 1996-97, Iturbe was one of the top subs for a Tiger team that advanced to the Sweet Sixteen and completed the season ranked #8 in the USA Today final poll. In the season opener that year, he was a key to Clemson’s 79-71 overtime victory over third-ranked and defending NCAA Champion Kentucky, as he repeatedly broke the Wildcats’ full court press with pin-point presses. Iturbe returned to the starting lineup as a senior, playing forward for a team that advanced to the NCAA Tournament for three consecutive years. In 1995, Iturbe was given the Spartanburg Tipoff Club award, presented to the best defensive player. He also led Clemson in charges taken during the 1996-97 and 1997-98, with 15 and 10 respectively. The 15 charges taken during hte 1996-97 season ranks eighth among all players since 1978-79. Iturbe ranks second on the Tigers’ all-time list for most assists by a center, dishing out 56 in 1994-95. He is also listed fourth on the same list for forwards, handing out 68 assists during the 1996-97 season.