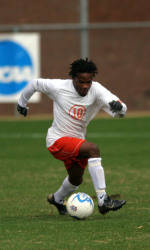 CLEMSON, SC – Dane Richards had an assist on the second goal and was involved in the third goal in New York Red Bull’s 3-0 victory over F.C. Dallas on Sunday in MLS action at Giants Stadium in East Rutherford, NJ. The game was played in torrential rain conditions. The victory puts the Red Bulls on top in the Eastern Standings.

Richards played at Clemson in 2005 and 2006. He led the Tigers to the NCAA Final Four in 2005 and helped the Tigers receive a number-one ranking in the polls during the 2006 season. Richards was a NSCAA All-American in 2006.

Richards has started two games for the Red Bulls as they have a 1-0-1 record this season. In the F.C. Dallas match, the first goal came from Josimer Altidore on an assist by Clint Mathis. The second goal was scored by Mathis and double assisted by Altidore and Richards. The third goal was created by Richards as he blew by the Dallas left back and served a cross in that Dave Van Denburgh finished.