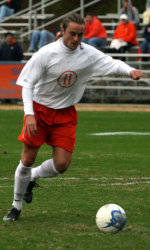 Moojen was named second-team All-ACC in 2006. He was named third-team NSCAA All-South. Moojen scored 11 goals and had two assists for 24 points this past season. Clemson advanced to the NCAA Final 16 this past season and finished the year with a 13-5-2 record. Moojen played in 19 matches and started 18.