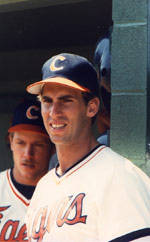 Clemson, SC – Former Clemson assistant baseball coach Dave Littlefield was named General Manager of the Pittsburgh Pirates on Friday. Littlefield had been the assistant general manager of the Florida Marlins. He succeeds Cam Bonifay, who was fired June 11.

Littlefield worked under legendary Clemson Head Coach Bill Wilhelm from 1986-88. He helped Clemson to a resurgence in its baseball program, one that has continued today. Clemson has won at least 40 games every year since 1986, Littlefield’s first year on Wilhelm’s staff. The Tigers have been to the NCAA Tournament every year since 1987, the second year Littlefield was on the staff. Clemson ranked 10th in the final Baseball America poll in 1987 and 15th in 1988.

Littlefield was an outstanding recruiter. Many of the players he recruited prior to his departure led Clemson to a 60-10 record and the College World Series in 1991. It remains the Clemson single season mark for victories. One of the players he signed with Clemson was current Atlanta Braves player Rico Brogna. Brogna never attended Clemson, however, as he signed a Major League contract after his senior year of high school.

After his three years at Clemson, Littlefield became East Coast Scouting Supervisor for the Detroit Tigers in 1989. After three years with the Tigers, he joined the Montreal Expos as a national cross-checker and eastern supervisor in 1992. After two and a half years with Montreal, he became the Marlins assistant GM in 1995.

Littlefield signed with the Philadelphia Philles in 1978 as a high school player in Portland, ME. He also spent time in the New York Yankees organization as a player. When his baseball career ended due to injury, he enrolled at the University of Massachusetts. He earned a bachelor’s and masters degree from UMASS and also played college football for the school as a linebacker. After his graduation in 1982 he began his baseball coaching career at his alma mater. He stayed at UMASS until coming to Clemson in the summer of 1985.