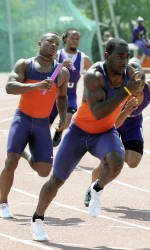 Greensboro, NC – Jacoby Ford won the 100m dash and anchored the victorious 4x100m relay for Clemson on Saturday at the NCAA East Region Track & Field Championships at the Irwin Belk Track Facility. Ford will be making his second straight trip to the NCAA Outdoor Championships in the 100m, while the 4×1 will be competing at nationals for the third time in the last four years. The NCAA national meet is scheduled for June 10-13 in Fayetteville, AR.

“I’m really proud of the kids’ efforts today, especially in the 100m dash and 4x100m relay,” said Lawrence Johnson, Clemson’s Director of Track & Field. “The 4×1 is going exactly the way we planned. We wanted to progress as the season went on, get comfortable with our exchanges, and then post our fastest times as we approach the NCAAs. I couldn’t be more proud of those guys.”

Ford captured his first-ever individual East Region championship in the 100m dash, the third crown in the last four years for the Tiger program (Travis Padgett won in 2006 & 2008). Ford got a great start out of the blocks, and then breezed to a personal best time of 10.04 seconds. His time ranks second-best in the nation heading into the NCAA Outdoor Championships.

“It feels good to come out here and compete well,” said Ford, the NCAA indoor champion in the 60m dash. “Some of the best athletes in the country are in the East Region, especially with some of the sprinters Florida and Florida State have on their teams.”

The men’s 4x100m relay erased the memories of last season’s disqualification by winning with a facility and school-record time of 38.78. The school’s previous best had been 38.82 by the team of Airese Currie, Otto Spain, Jacey Harper, and Dwight Thomas in 2002. Clemson was runner-up in the event at the East Region Championships in both 2006 and 2007, before the exchange violation last year in Tallahassee.

This time around, all the exchanges were smooth for the Tigers. C.J. Spiller led off with solid legs, before handing off to Trenton Guy on the curve. Guy bolstered Clemson into a solid lead, and then Ford ran away with it down the stretch with Florida junior Jeremy Hall well behind. Florida and South Carolina received automatic bids to the NCAA Championships, while ACC champion Florida State did not finish after a botched exchange early in the race.

“Our performance today speaks highly of my three teammates,” Spiller said. “Those guys did their parts. This was kind of a redemption for us, because last year we dropped the stick after everyone had such high hopes. Before the race, I told those guys to wipe that out. This is a new team, with new chemistry. We had our prayer, then we just went out and executed what coach (Tim) Hall and coach Johnson had been teaching us in practice.”

This marks the first qualifications to the NCAA Championships for both Guy and Murdock. A sophomore from Charlotte, NC, Guy has been an instrumental part of the Tigers’ 4×1 during his first two years with the program. Murdock, a first-year freshman, placed sixth in the 100m final and missed an automatic spot in the field at the NCAA Championships by a mere one-hundredth of a second.

“I’m real happy for those guys,” Johnson noted. “With Justin being a freshman, and Trenton just a sophomore, those guys are always improving and will be mainstays as we continue to bring in talented sprinters to join them here at Clemson.”

Josh Fowler posted a mark of 49’5.75″ in the triple jump. It was the second-best overall mark of the season for the sophomore from Inman, SC, and his best effort in legal wind conditions. He previously jumped 49’11.25″ at the ACC Championships in April. Fowler placed 19th on Saturday, despite jumping into a significant headwind.

Linda Buchholz was 11th in the women’s javelin throw. She put together a solid throw of 143’4″ on her first attempt, but missed qualifying for the final round by just a few feet. She then moved on to the high jump, where she did not clear the opening height.

Alex Padgett, a native of Rock Hill, SC, finished 13th in the hammer throw in his first-ever trip to regionals. He put together a mark of 188’6″ on his second throw, but did not advance to the final. The red-shirt sophomore concludes his season ranked third in school history in the event (197’0″).

Miller Moss, who did not qualify in an event for the East Region Championships, should be extended an at-large bid to compete in the decathlon at the NCAA Outdoor Championships. Moss recorded a provisional qualifying total of 7,323 points at the Deacon Combined Events meet earlier this month. His point total ranks 22nd on the NCAA descending order performance list. He will await the NCAA to publish the accepted entries for the national meet in the coming week.