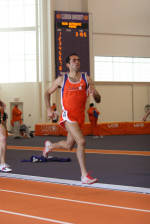 Fayetteville, AR – The men’s track & field team had a full day of competition at the highly-regarded Tyson Invitational, hosted by the University of Arkansas. A pair of Tiger sprinters, Jacoby Ford and Travis Padgett, headlined Clemson’s efforts on day one at the Randal Tyson Center.

Ford ran an NCAA automatic qualifying time of 6.61 in the prelims to qualify for the final at 9:30 PM. In the final, he improved by a hundredth to 6.60 after running away with the collegiate 60m title. The time is the third-best in school history, trailing only former Olympians Michael Green and Shawn Crawford.

Travis Padgett, ranked among the `Dandy Dozen’ in the 60m by Trackwire, was invited to race in a special 60m dash against professionals. The event was won by former Tiger great Crawford, who ran a 6.61. Padgett finished fifth in the eight-man field, ahead of former Tiger sprinter Jacey Harper. The Shelby, NC native had a time of 6.71 in the featured race.

Corey Brown placed second in his section with a personal best time of 48.10 in the 400m dash. Cowin Mills (48.90) and Andrew Porter (49.02) also competed in that event for the Tigers. All three improved on their season bests on Friday.

Itay Magidi finished as runner-up in the championship mile run. The senior improved slightly on his personal best after running a 4:05.14, which is just shy of an NCAA provisional qualifying mark. He was second to Darren Brown (4:04.74) of Texas. In the 5000m, Matt Clark was 11th overall after running a personal best time of 14:10.20. His time was just two-tenths shy of an NCAA provisional qualifying mark at the Razorbacks’ banked 200-meter track.

George Fields was fourth in the collegiate level long jump. He hit a mark of 24’5″. In the pole vault, freshman Chris Spear posted a personal best after clearing 16’4.75″. He finished in a tie for the sixth position. Teammate Mitch Greeley will compete in Saturday’s championship round of the pole vault.

The men’s team returns to action Saturday at the Tyson Invitational.