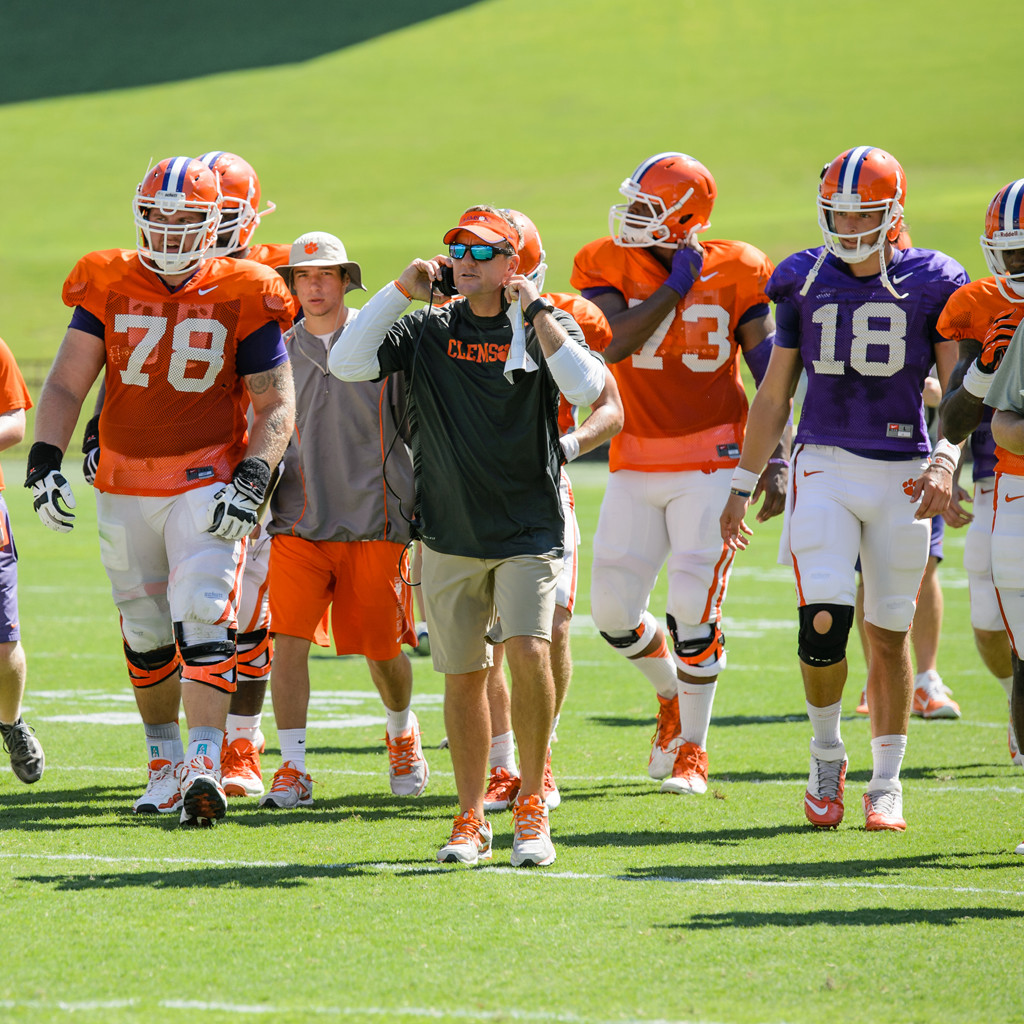 CLEMSON, S.C. — Head coach Dabo Swinney was more upbeat after Saturday’s scrimmage than he was after the one Wednesday. It was the final stadium scrimmage of the preseason for the Tigers as they prepare to meet the 12th-ranked Georgia Bulldogs on August 30, just two weeks from today. “We had a little of everything today,” Swinney said. “We had some good and had some bad on both sides of the ball. Overall, I thought the defense set the tempo and had a good day. There were a few missed plays on competitive situations where the receivers made the play. “Early in the scrimmage Jadar Johnson had a pick-six. D.J. Howard had a 40-yard touchdown run and Adam Humphries made a great catch in the endzone.   “We had an overtime and that was well played. We had to go into a second overtime.”

Swinney even had the officials and players go through the coin flip and the rules of overtime. The scrimmage also included a two-minute drill segment, short yardage and plenty of special teams practice with live tackling. At the end of the scrimmage Swinney had the team practice special late-game situations. Swinney talked about his offense and defense after the practice.

“We are going to be fine on offense. Will we be the finished product in game one? I doubt it. But by the end of the year I expect we will be up there among the best offenses in the country. “On defense we are going to have to go out there and prove it. Are we one of the best in the nation? We will have to show it on the field.” Daniel Rodriguez had a good scrimmage with a pair of touchdown catches. He started the week on the bench with a sprained ankle. Freshman tight end Milan Richard also had a touchdown reception. Linebackers Tony Steward and Stephone Anthony each had interceptions. Travis Blanks, Sam Cooper, Jordan Leggett, Charone Peake, Stanton Seckinger and Mike Williams were all held out of the scrimmage due to injury. In general, Swinney said it has been a good camp, but the team and coaches are now ready to concentrate on someone else.

“We are tired of practicing against each other. The team is ready to start preparation for Georgia. They are ready to look at some film of someone else instead of reviewing practice tape.”