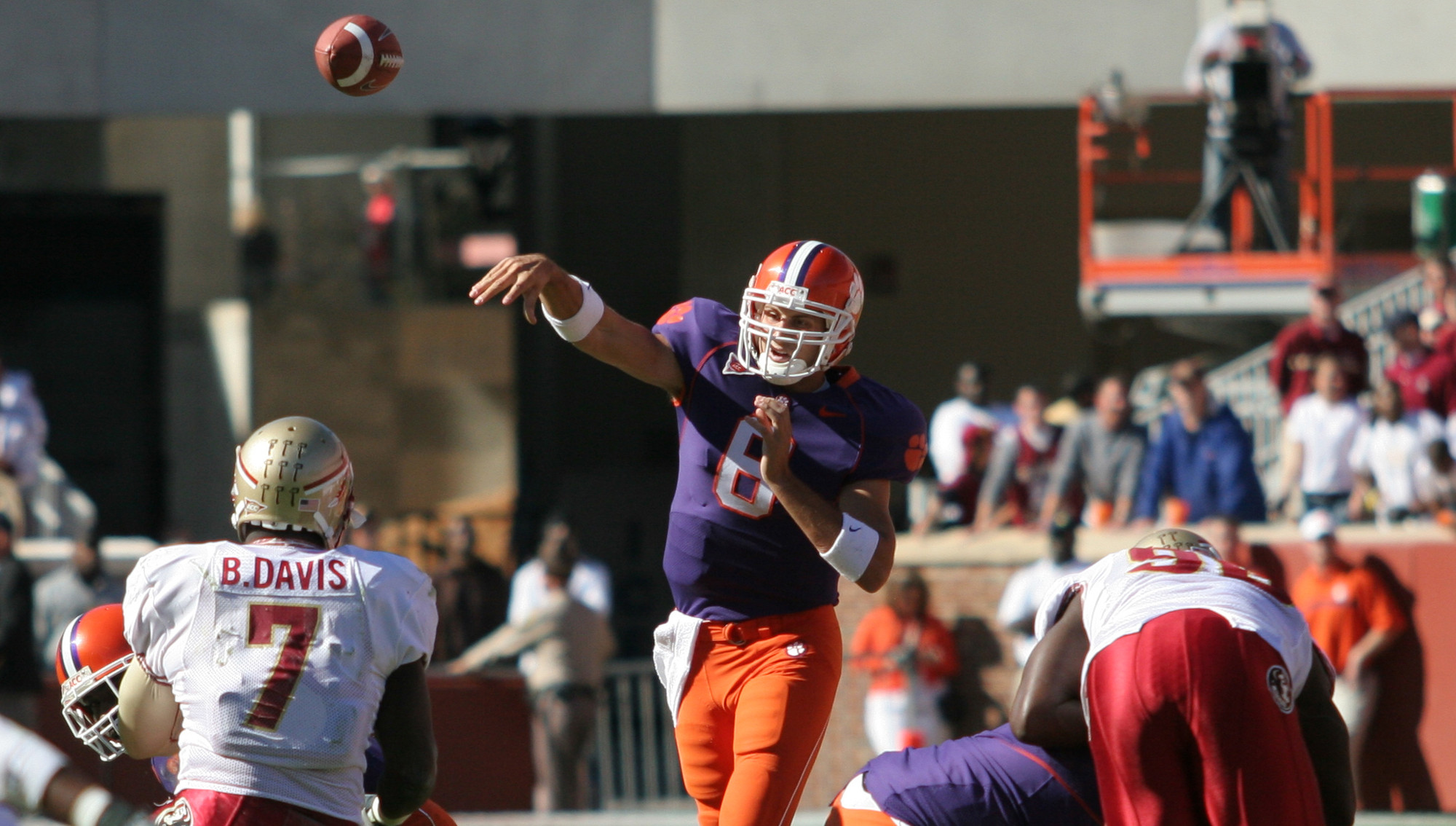 TERRY SMITHVirginia, 1993While he only had two receptions on his Senior Day in 1993, it was a memorable game for the late Terry Smith against Virginia. On this day, he became Clemson’s career leader in receiving yards, and he did so on a 73-yard touchdown reception that was the key play of the game in Clemson’s 23-14 victory.

Smith finished his career with 2,681 receiving yards, fifth-most in school history. It is a bit ironic that we talk about this game just a week after his nephew, DeAndre Hopkins, became Clemson’s leader in this receiving category.

FRED CONEFurman, 1950Fred Cone closed out his Ring of Honor career in a 57-2 win over Furman. Head Coach Frank Howard’s favorite player of all-time gained 145 yards on 19 carries, caught a 39-yard pass to set up a score, scored two touchdowns, and even kicked an extra point.

It was an easy but an important win for the Tigers, who improved to 7-0-1. Clemson moved to #11 in the AP poll with the victory and kept its hopes alive for an unbeaten season and an Orange Bow bid.

A 41-0 win at Auburn the following week clinched the Orange Bowl bid, a top-10 national finish, and a second undefeated season in three years with Cone running the ball.

BRANDON STREETERDuke, 1999With all the recent strong passing performances by Tiger quarterbacks, it might surprise you that the top Senior Day performance by a Tiger senior in terms of passing yards still belongs to Brandon Streeter.

The 1999 season was a difficult one in terms of health for Streeter, as he suffered multiple injuries during the course of the season. He had taken the Tigers to victory in relief during the previous week at Wake Forest, a game he was not supposed to be able to play, and was back on the field for the Duke game in his final home appearance.

That day, he conducted Head Coach Tommy Bowden’s offense with precise passes over the middle and completed 22-30 passes for 279 yards and two touchdowns. His final touchdown pass in Death Valley was an 18-yard strike to Brian Wofford, his close friend and classmate who was tragically killed in an auto accident this past summer.

WOODROW DANTZLERDuke, 2001Woodrow Dantzler became the first player in Division I history to rush for 1,000 yards and pass for 2,000 yards in one season on his Senior Day against Duke in 2001. This was not supposed to be his Senior Day game, but the events of 9/11 postponed the game with Duke on September 15 and moved it to the end of the season on December 1.

Dantzler finished this game with 135 rushing yards and 243 passing yards in just three quarters of play, a typical performance for Dantzler during his last two seasons.

He went over the 1,000-yard rushing mark with an 18-yard jaunt with just under six minutes left in the third quarter, much to the delight of the crowd who was well aware of the accomplishment. Overall, Dantzler set eight Tiger records on this day in which he accounted for five touchdowns (four passing, one rushing) in this 59-31 Clemson victory.

CHARLIE WHITEHURSTFlorida State, 2005Charlie Whitehurst, #2 on the Clemson career list for wins by a starting quarterback, had a memorable final day in Memorial Stadium, as he led the Tigers to a 35-14 victory over #17 Florida State, a team that would go on to win the ACC Championship.

Whitehurst completed 21-32 passes for 269 yards and three touchdowns, including two in the third quarter when Clemson went on a 21-0 run. His favorite target was junior Chansi Stuckey, who had 11 receptions for 156 yards and two touchdowns.

Whitehurst would go on to lead Clemson to wins over South Carolina, his fourth as a starting quarterback, and Colorado in the Champs Sports Bowl to finish with 25 career victories.

RODNEY WILLIAMSSouth Carolina, 1988Rodney Williams’ 31st career victory as Clemson’s starting quarterback might have been his most satisfying, as the Tigers defeated rival South Carolina for the first time since 1985 with a 29-10 victory.

Williams completed 13-26 passes for 192 yards and also gained 38 yards on five carries. He scored Clemson’s final touchdown in the fourth quarter to put the game out of reach. His 192 passing yards and 230 yards of total offense were season highs for Williams, who remains Clemson’s career leader in victories by a starting quarterback with 32.

Williams, a native of Columbia, had been heckled by Gamecock fans the previous year in South Carolina’s 20-7 victory at Williams-Brice Stadium. But this time when Clemson fans chanted his name, “Rodney, Rodney,” it was recited in an entirely different cadence with an entirely different meaning.

Anderson made his Senior Day a special one with 21 tackles in Clemson’s 39-21 victory over South Carolina. There have been 16 games in Clemson history, home or away, in which a Tiger has had at least 20 tackles, but this is the only 20-tackle game by a defensive lineman. Anderson was named Sports Illustrated National Defensive Player-of-the-Week for his performance.

PERRY TUTTLEMaryland, 1981All-American Perry Tuttle had a wonderful Death Valley sendoff with 10 receptions for 151 yards in Clemson’s 21-7 victory over Maryland on this chilly Saturday afternoon. He had two touchdown catches from Homer Jordan, one in the first quarter and one in the second quarter.

Tuttle’s 10 receptions tied a career high, and his 151 yards were the second-most of his career. It was just the fifth game in Clemson history in which a Tiger receiver had 10 catches in a game.

The performance happened on a big stage, because the victory made Clemson 10-0 for the season and maintained the Tigers’ #2 national ranking. The victory also clinched the ACC Championship.

It was a special day for Tuttle, because he also became Clemson’s career reception leader, passing former teammate and mentor Jerry Butler.

KEVIN MACKMaryland, 1983The Tiger record for rushing yards on a Senior Day by a senior is still held by Kevin Mack. The native of Kings Mountain, NC, who played his high school football for current Clemson Associate Head Coach Dan Brooks, had 186 yards on 30 carries and three scores in the Tigers’ 52-27 win.

Mack scored on runs of six yards and one yard in the first half when Clemson took a 28-7 lead. He scored his third touchdown in dramatic fashion in the fourth quarter. On his final carry in Memorial Stadium, he sprinted 42 yards for a touchdown with only one shoe. During the run, he lost a shoe, but it never slowed him down.

The Tigers finished with 350 yards on 68 carries, so Mack had more than half the team’s real estate.

WILLIE UNDERWOODSouth Carolina, 1980This might be the most important individual performance in Clemson history. The Tigers had a 5-5 record entering the final game of the 1980 season and were coming off a 34-7 loss at Maryland, the worst setback of Danny Ford’s 11-year head-coaching career at Clemson.

Led by eventual Heisman Trophy winner George Rogers, South Carolina was 8-2, including a win at Michigan, and was ranked #14 in the nation.

Underwood was playing in his 47th career game for the Tigers, and the starting defensive back had never hauled in an interception. However, Underwood saved the best for his Senior Day, as he had two interceptions for 101 yards, still one of only two 100-yard interception return games by a Tiger in history.

Underwood had a 64-yard return that set up Clemson’s first touchdown, then returned his other interception 37 yards to paydirt in the fourth quarter to clinch Clemson’s 27-6 victory. Underwood also added 17 tackles from his safety position and was named Sports Illustrated National Defensive Player-of-the-Week.

The victory propelled Clemson to the 1981 National Championship the following season. Underwood was not on that squad, but many Tiger fans give him a lot of credit for jumpstarting that 1981 season. I bet he still gets a Christmas card from Ford.