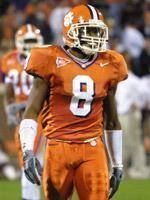 Clemson returned to the practice field on Monday for a two and a half hour workout in full pads. The Tigers had their final full scale scrimmage on Saturday, then had Sunday off. The practice on Monday centered around preparation for Wake Forest, Clemson’s opening opponent in two weeks.

“We worked hard on preparation for Wake Forest and will from here on out,” said Bowden. The Demon Deacons are the last team to defeat the Tigers, a Wake Forest win in Winston-Salem last November 1.

Bowden said he was pleased with the performance of his team in the scrimmage on Saturday and he actually singled out some young players for their play in Death Valley. I talked about Cortney Vincent’s fine play after the scrimmage and my opinion did not change after looking at the film.

“The first year freshmen in the secondary played with the third team, but as a unit, I was impressed with Chris Clemons, Brandon Croley, Michael Hamlin and Adrian Kindred. We hope to red-shirt them, but that could be a strong secondary as a unit in the future.”

The Tigers will continue practice once a day this week. The walking wounded started to come back to practice as Tye Hill, Christian Capote, Ryan Charpia and Kevin Burnette all returned to practice from the injured list.

Chansi Stuckey was in a green jersey due to a pulled groin, but he should be back to full speed later in the week. Tim DeBeer was also limited due to a sprained ankle.

The highlight play of the day was a diving interception by cornerback Tye Hill off a long pass from Charlie Whitehurst.

Marion Dukes, the sophomore starting tackle from nearby Pickens, left practice with a rib injury, but it is not serious. As a result, Roman Fry moved to a tackle slot with the first team. “Roman is a putty player,” said Bowden. “He is valuable because you can plug him in just about any hole on the offensive line.”