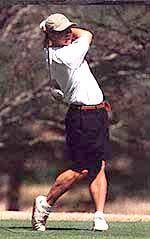 Five Tigers to Play in This Week’s Nationwide Tour Event

Five players with ties to Clemson, including current senior D.J. Trahan, will take part in the BMW Charity at the Cliffs in Travelers Rest, SC this weekend. The Tournament, which will be played at two different courses on Thursday and Friday, will be televised by the Golf Channel all four days from 1:30 PM to 4:00 PM. Thursday and Friday the tournament will be played at the Cliff’s Valley Course and the Keowee Vineyards Course.

The field of golfers includes defending champion Charles Warren, an All-American at Clemson between 1994-98 and the only Tiger in history to win the NCAA Championship (1997). He won the tournament last year with a score of 264. It was the second straight year a former Clemson player had won the event, as Jonathan Byrd took the title in 2001. Warren will start defense of his title at 7:55 AM Thursday at the Vineyards Course. One of his playing partners in the Pro-AM portion of the event will be former Clemson quarterback Rodney Williams.

Trahan, the number-one ranked College player and Amateur in the country, will tee off at 8:45 AM at the Vineyards Course. He has led the Tigers to the number-one team ranking in the nation in all three college golf polls. This will be the second straight year the reigning College Player of the Year has received a special exemption to this tournament. He finished 45th at the tournament last year.

It will be Trahan’s third career appearance at this event, as he also played in 1999 as a senior in high school. Trahan will play with Golf Channel celebrity Jennifer Mills in the first two rounds, a pairing that will lead to a feature on next week’s college golf segment on Wednesday evening on the Golf Channel.

Kevin Johnson, who has won three Nationwide Tour events in his career, will also be competing. The former Clemson All-American of the 1985-88 era, who was the National Public Links Champion in 1987, will be the first former Tiger to tee off on Thursday. He has a 7:15 AM tee time at the Vineyards Course. Johnson is currently 11th on the Nationwide money list.

Tommy Biershenk played for the Tigers from 1992-96 and will tee off at 7:25 AM at the Vineyards, while former All-American and Greenville native Lucas Glover will be the only former Tiger playing at the Cliff’s Valley Course. Glover will start at 12:20 PM.

Former Clemson All-American and long time Major League baseball player Bill Spiers is one of the celebrities participating. He will start at 1:10 PM at the Cliff’s Valley Course.

Tee Times of Golfers with Ties to Clemson