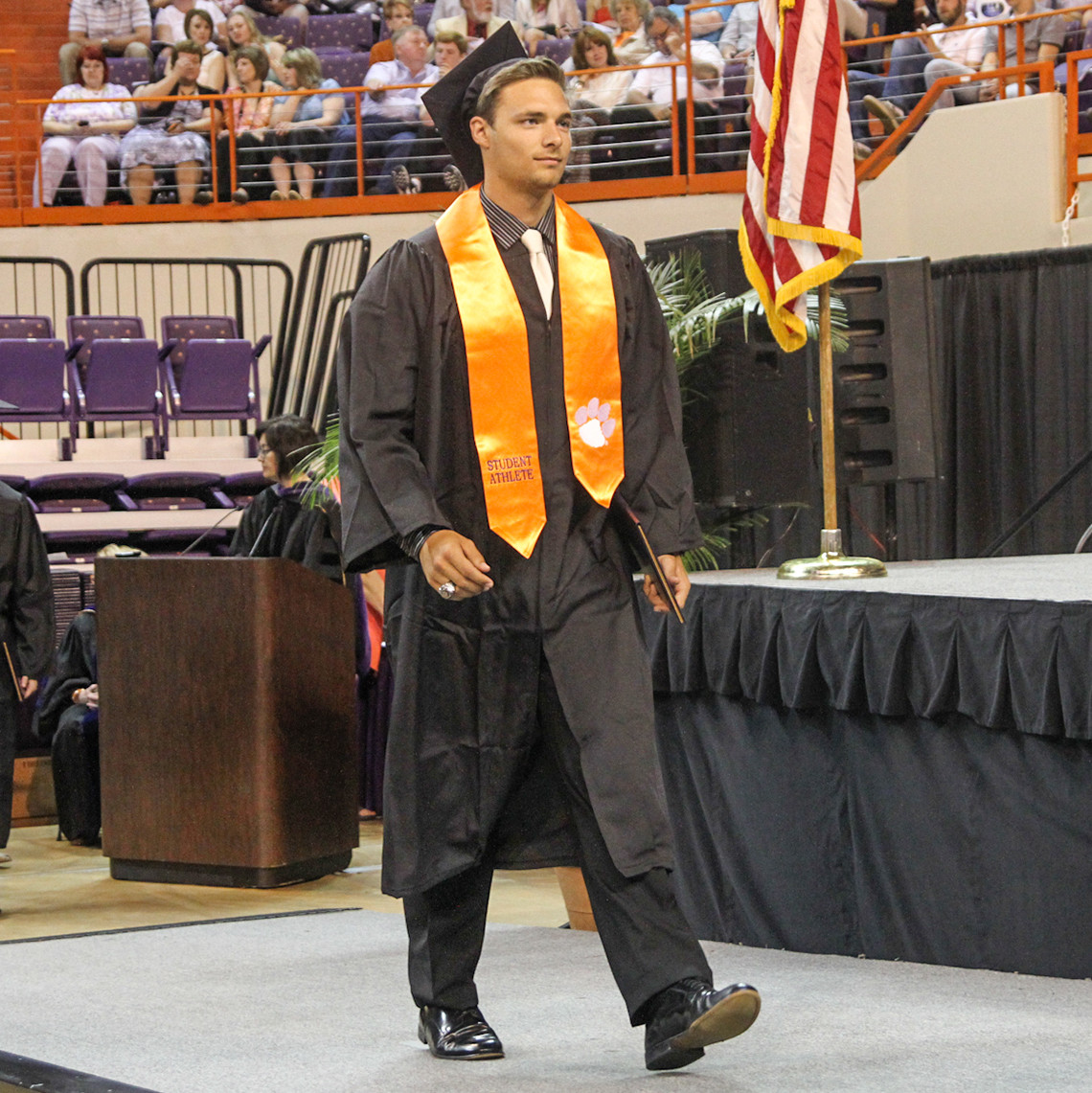 Clemson, S.C—Fifteen Clemson football players earned degrees from the school during graduation ceremonies at Littlejohn Coliseum on Friday.  The 15 players included nine former Tigers and six who will still be members of the team this coming fall.  Sixteen Clemson players earned degrees in December, including two active players in 2015, giving the program 31 graduates over the last five months.

The list of former Clemson players who earned diplomas on Friday includes current NFL player Ricky Sapp and former NFL linebacker Leroy Hill.  Sapp last played at Clemson in 2009 and Hill in 2004 when he was the ACC Defensive Player of the Year.  Sapp and Hill are the fourth and fifth former Clemson players who returned to Clemson to earn their degrees during or after their NFL career since Dabo Swinney took over as head coach at the end of the 2008 season.

With the distribution of diplomas on Friday, Swinney has had 120 team members who have stayed until their fourth year at Clemson academically and 114 of them (95 percent) have graduated.    That includes 57 of the last 58 over the last three years.

With today’s graduation, 21 of the 24 starters on the 2012 Clemson team now have their degrees, including all 11 season starters on defense from the Tigers team that finished ninth in the final USA Today poll after a Chick-fil-A Bowl win over LSU.

On Monday, 46 former Clemson players will be on NFL rosters and 35 of them will have their degrees. Six of the 11 who don’t turned professional after just three years.  “I write a letter each year around this time to each former player who has not  yet earned his degree,” said Head Coach Dabo Swinney.  “I make sure they know exactly how much work they need and I talk to them about when they are going to finish.  I am very proud of Ricky Sapp and Leroy Hill today.”

Last December when Vic Beasley and Grady Jarrett graduated, it meant nine of Swinney’s 12 All-Americans in his six years as head coach had graduated.

Players who graduated on Friday who still have football eligibility remaining include Jim Brown (Management); C.J. Davidson (Sociology); Joe Gore (Parks, Recreation, Tourism Management); Eric Mac Lain (Health Science); Collins Mauldin (Wildlife and Fish Biology); and Ryan Norton (History).  These young men will join December 2014 graduates Charone Peak and Stanton Seckinger as graduates on the 2015 Clemson team.   Those eight players will have a mortar board logo on their helmets during the season signifying they have earned a degree.