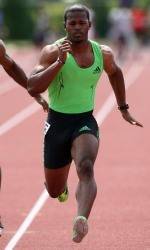 Gracia was one of six qualifiers (out of 32) in the women’s 100 hurdles. She will be joined by 2011 senior Michaylin Golladay, as well as underclassmen Jasmine Edgerson, Keni Harrison, Bridgette Owens and Brianna Rollins. The women’s high hurdles will be held Friday and Saturday, June 22-23. The final will be televised by NBC live at 8:45 PM EDT on Saturday.

Kulik qualified to compete in the women’s steeplechase by virtue of her ACC winning time of 9:52.90. Her qualifying round will be Monday, June 25. The final is at 7:45 PM EDT on Friday, June 29 and will be shown live by NBC Sports Network.

Sinkler was Clemson’s lone female qualifier in a field event. She will compete in the triple jump qualifying round on Saturday, June 23 at 6:20 PM EDT. Sinkler’s qualifying performance was her mark of 13.51 meters in a sixth-place finish at the NCAA Outdoor Championships two weeks ago in Des Moines, IA.

Spencer Adams is the lone active member of the Tiger men’s program to qualify for the Trials. He will compete in the men’s 110 hurdles. The qualifying round will be Friday, June 29 and the final on Saturday, June 30. The final will be televised by NBC live at 9:40 PM EDT. Adams owns a personal best 13.38 heading into the Trials.

Shawn Crawford will be the most veteran member to represent the Clemson track & field program. He will be participating in his fourth Olympic Trials. He was the gold medalist in the 200-meter dash at the 2004 Olympic Games in Athens, Greece and a medalist in the event in 2008 in Beijing, China as well. Crawford will compete in the qualifying round of the 200 dash on Friday, June 29 at 4:45 PM EDT. Should he advance to the final, it will be held at 7:50 PM EDT and televised live by NBC on Sunday, July 1.

Miller Moss, 2011 NCAA heptathlon champion as a senior, is slated to compete in the decathlon. He qualified via his point total of 7,996 at the NCAA Outdoor Championships last summer. Moss, who trains in Austin, TX with World Champion Trey Hardee, will compete Friday, June 22 and Saturday, June 23 in Eugene.

Two former male long jumpers round out the qualifiers for the 2012 U.S. Olympic Trials. George Kitchens, a Tiger from 2002-05, and George Fields, who jumped from 2005-09, will compete in the qualifying stage of the event on Friday, June 22. Kitchens hit a mark of 8.14 meters earlier this spring, while Fields had a personal best leap of 7.92 meters as an unattached athlete at a home meet in May to earn a spot in the field. The long jump final is Sunday, June 24 at 6:00 PM.