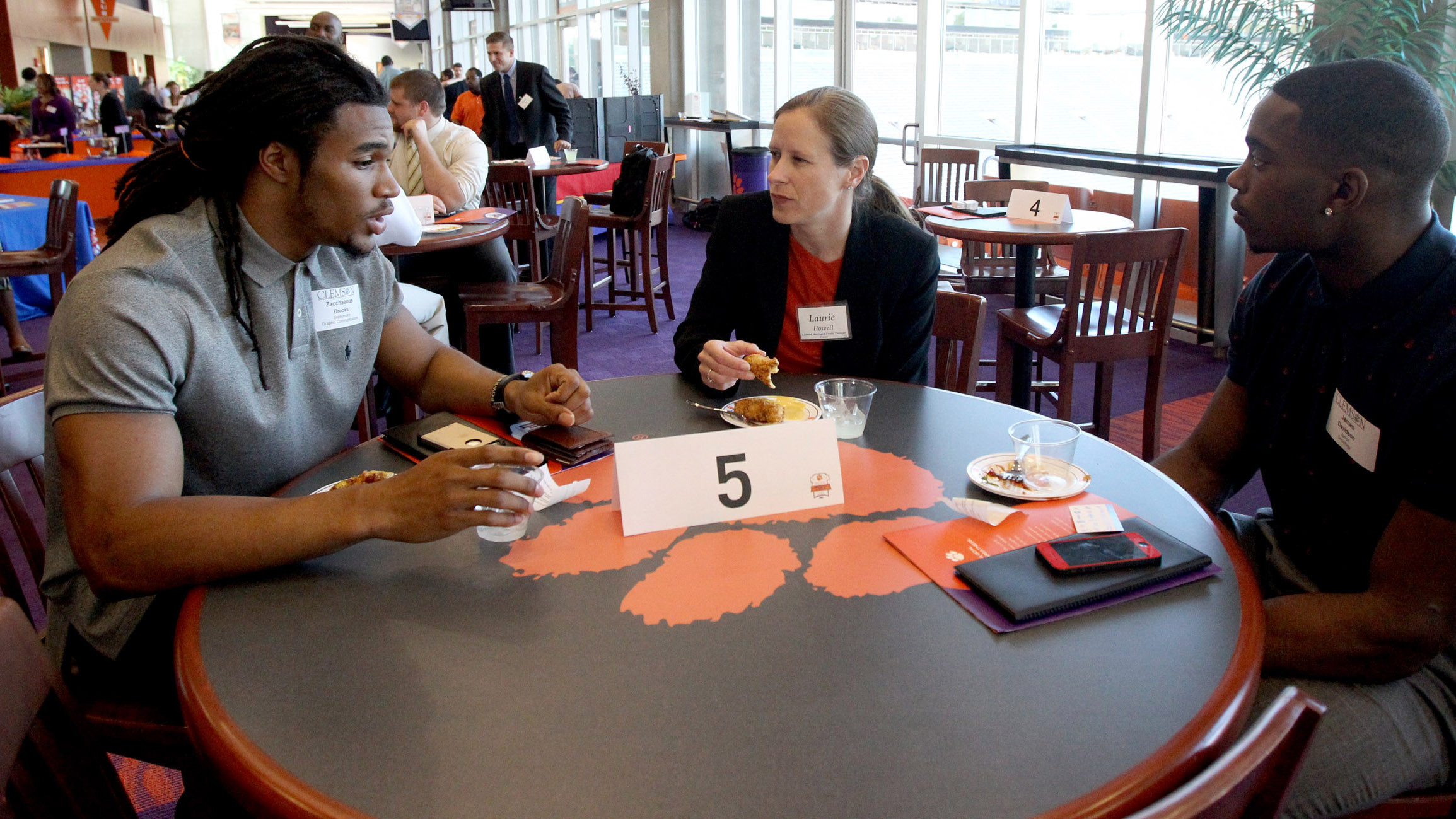 CLEMSON, S.C. – Of all the jobs Ray Williams has had since graduating from Clemson, none were in the field he got a degree in. The important part was that he had one.

That was a message Williams delivered to student-athletes he met with Wednesday night inside the WestZone as part of Tiger “Pro” Day, an event organized to prepare Clemson student-athletes for life after college.

“This is a Wednesday night. If we had gone out on the football field today and had a bad practice, Coach (Danny) Ford would’ve had us back out on the field now, not in here doing something like this.”

Williams, who owns an Allstate Insurance agency in Easley, was one of more than 50 area professionals who took part in the event.

The football program has held a similar event in years past, and this was the first time the event has been expanded to include the rest of the student-athletes from other sports, including upperclassmen from all Olympic sports.

The event was coordinated by Assistant Director of Student-Athlete Development Kyra Lobbins and designed to integrate the complete student-athlete experience, preparing them for success not just on the field of play, but off it, as well.

“We’re focused on preparing them for that transition from college to the real world,” Lobbins said. “We hold their hands through a lot of things and kind of coddle them, but at some point they are going to have to move on, and having events like this is what’s going to prepare them for the next step.”

The event was planned to accommodate about 250 student-athletes and more than 50 professionals, so there was a small student-to-professional ratio to allow for more personal interaction.

“If every student-athlete walks out of here with just one more connection than they came in with, then we did a good job,” Lobbins said.

And like Williams, many of the professionals were former Clemson student-athletes themselves, meaning the current Tigers got a chance to learn from someone who had walked in their shoes not so long ago.

“That’s the great thing about Clemson is that there is such a sense of family and such a sense of commitment to one another,” Director of Athletics Dan Radakovich said. “It was a great effort to pull all these people together, but I’m sure they didn’t get a lot of no’s. People are very helpful and want to be able to give back and be a part of our student-athletes’ lives while they’re here at Clemson.”

“It was a really good experience to listen to the speakers that we had today because they helped us understand the value of what life is about to be after college,” said Nikki Dixon, a junior on the women’s basketball team.

The event was made possible by Jack and Jane Shaw, whose endowment for a lecture series helped bring Tiger “Pro” Day to fruition.

The opening speaker was Marc Williams, founder of Williams Communications and former Global Brand Director for Champs Sports. At the heart of Williams’ message was the importance of networking in building a career and an emphasis on “it’s not who you know, but who knows you.”

And networking was a primary focus of the event, as each student-athlete was given a stack of personalized business cards and an alphabetized binder in which to keep the business cards they accumulated.

Of course, in the modern business world, networking isn’t limited simply to face-to-face interaction, and Dr. Jimmy Sanderson, an Assistant Professor of Communication Studies at Clemson who served as one of the professionals, provided insight for the student-athletes in that regard.

“The only thing I really tell students is whatever industry you want to work in, there are a lot of people who are on social media – whether it’s LinkedIn or Twitter or whatever – who will mentor you and reach out and do things for you,” Sanderson said. “So, I’m really trying to show them the importance of building networks and really trying to engage people and meet people, but then also developing something that’s going to make them stand apart from someone else, so that when you go into interviews you can say, ‘Here’s what I’ve done,’ and not just, ‘Oh, I’m a hard worker.’

“For me, it’s really been about those two things: networking and doing something of value that they can take in and show somebody.”

And from listening to the student-athletes, it certainly sounded as if the messages they were getting from the professionals was received loud and clear.

“None of us are going to play sports for the rest of our lives,” said Kelly Gramlich, a junior on the women’s basketball team. “We’re going to have to do something else eventually, so having a career and just networking, having your résumé looked at, setting up internships, those are extremely important for student-athletes.”