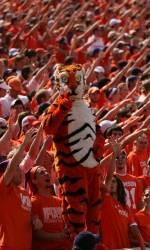 Clemson, SC – The Clemson football team will hold its annual Fan Appreciation Day in Memorial Stadium on Sunday, August 12 from 3:00 p.m. to 5:00 p.m. All Clemson players and coaches will be available for autographs and to pose for photos under the North, South and West Stands of Memorial Stadium. The first 1000 youngsters 8th grade and under entering through Gate 5 (only) will be given a Clemson t-shirt.

Defensive players will be available under the North Stands and offensive players will be stationed underneath the South Stands. Due to the expected demand and in an attempt to accommodate as many fans as possible, fans will only be allowed to have one item autographed or one picture taken with James Davis and C.J. Spiller, who will both be available near the South Stand elevators.

Those fans who want Coach Bowden’s autograph or picture should enter at the gate at Howard’s Rock. Also due to demand and in order to accommodate the most fans possible, fans will only be allowed to get one item autographed or one picture taken with Coach Bowden.

Click on the link below to view a map of the stadium showing the location, by position, where the players and Coach Bowden will be stationed for Fan Appreciation Day.

Clemson football posters and free soft drinks will be available compliments of Coca Cola. The IPTAY and Ticket Office will be open from 1:00 p.m. – 3:00 p.m. for those fans who want to purchase tickets or a 2007 Clemson Media Guide.

Parking will be available in Lot 4, Lot 5, the physical plant parking lot behind Fike Recreation Center and along the streets near Memorial Stadium. The men’s and women’s outside restrooms at the East Gate of the stadium will be open from noon until 6:00 p.m. on the day of the event.