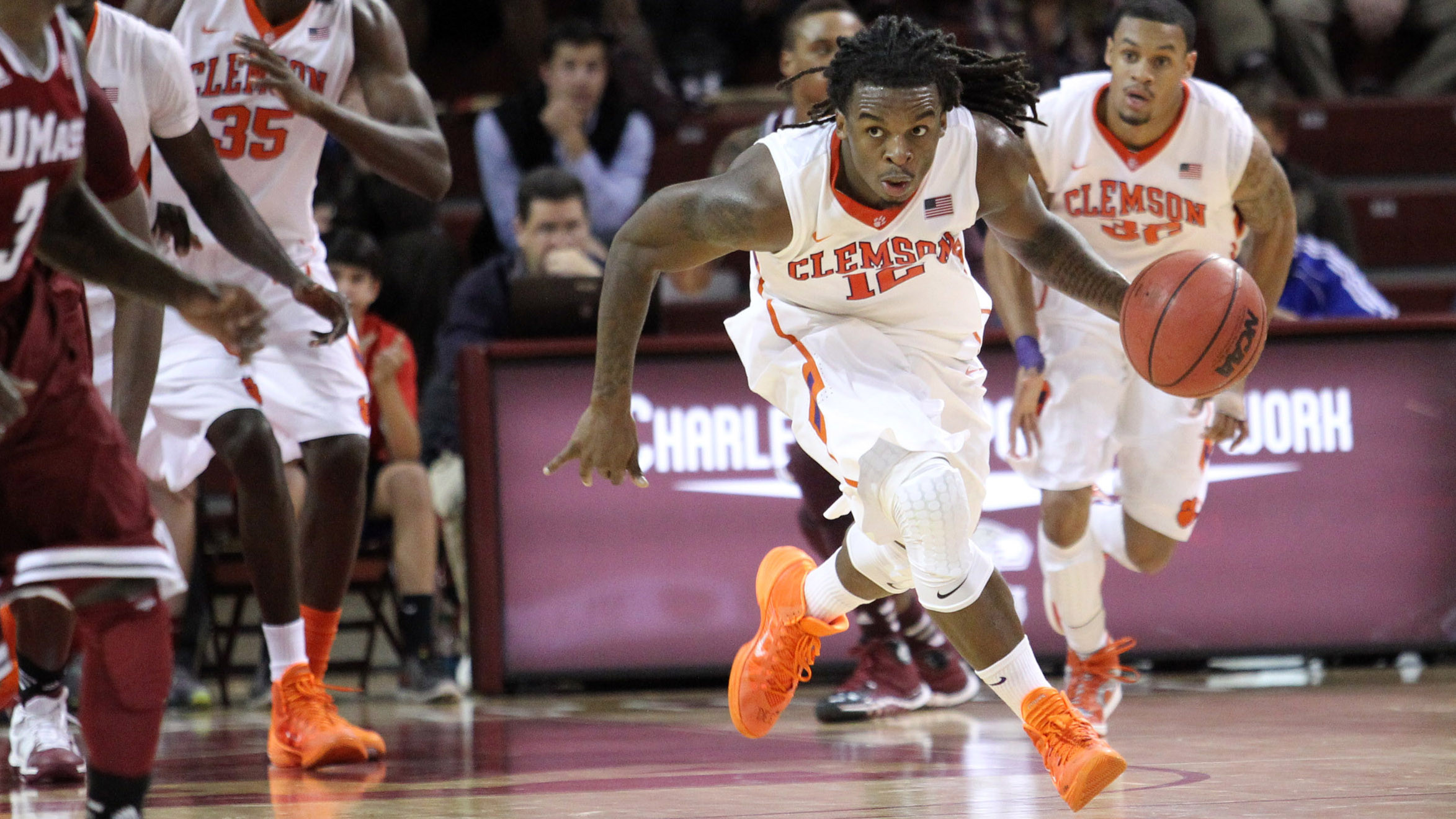 CHARLESTON, SC – Clemson didn’t leave the Lowcountry with the Charleston Classic title, but it did bring home plenty of answers about what it is capable of this season.Not that the Tigers were interested in any such moral victories as they departed TD Arena late Sunday evening.There was no hiding the disappointment on the faces of Head Coach Brad Brownell and junior point guard Rod Hall as they spoke at a news conference in the wake of Sunday’s 62-56 loss to UMass in the tournament title game. Still, both were able to reflect on the positives of beating two 2013 NCAA Tournament teams to get there.”I thought we did some good things on the trip,” Brownell said. “I’m disappointed we didn’t play better (against UMass) and keep some good things going with certain guys, but we are still a young group where our guys are trying to become consistent offensive players.” Clemson (5-1) shot 27 percent from the field before halftime and dug itself a double-digit deficit, but rallied from as many as 14 points down to close within three when Hall scored on a layup in transition to make it 59-56 with 56.4 seconds to go.But on the game’s key possession, after forcing a wild shot from UMass point guard Chaz Williams, the Tigers didn’t block out on the back side and gave up an offensive rebound to Raphiael Putney, who put it back easily to seal the victory.”We’ve bounced back when we were down,” Hall said. “We stayed together and just kept fighting. Even though things weren’t going right, we still tried our best to get out of the hole and come back as a team and play hard.”The crucial basket by Putney was a microcosm of the night for the Tigers, who were outscored 38-28 in the paint and 19-10 on second-chance points by the Minutemen and their lengthy front line.”We needed those rebounds down the stretch, and they put most of those rebounds back in or either got fouled,” Hall said.Without a senior on the roster, the young Tigers had opened the season with three convincing wins at home, a pair of blowouts against lesser competition and an impressive double-digit victory over rival South Carolina.But the competition took a decided step upward once Clemson reached Charleston, as it beat two teams that played in the NCAA Tournament last season – Temple and Davidson – and one that certainly looks like it has an excellent chance at an invite to the Big Dance this year in UMass.”The good thing about tournaments is you play different types of teams,” Brownell said. “Davidson and UMass are completely different, so those are good learning experiences.”Junior small forward K.J. McDaniels was named to the all-tournament team at the conclusion of Sunday’s game. He scored a career-high 22 points in a blowout win over Davidson on Friday, but struggled against UMass, going 4-for-14 from the field and also committing four costly turnovers.”It’s going to be hard for us to beat really good teams without K.J. McDaniels having a great night,” Brownell said. “But we wouldn’t have been in the championship game without K.J. McDaniels.”The Tigers’ most consistent player in Charleston was the gritty and steady-handed Hall, who led the Tigers with 16 points for his fourth straight double-digit scoring game, the longest stretch of his career.”Coach stays on me about being aggressive and making sure we get a good shot and to look for myself a lot more, and I think it’s been a big change,” Hall said.Hall was also instrumental in shutting down Williams, the Minutemen’s star player, who finished with four points on 1-of-12 shooting.”I thought defensively we were pretty solid and did some good things on their point guard,” Brownell said. “Rod especially was terrific. But offensively, we didn’t play very well and looked a little nervous at times, especially at the beginning of the game.”UMass jumped out to an early 18-10 lead by virtue of an 11-0 run over a 3:12 span and appeared set to overwhelm the Tigers with its up-tempo and physical brand of basketball.Clemson was able to stem the tide by taking Williams out of his game, but was unable to stop the Minutemen, particularly center Cady Lalanne, when it mattered.”(Their style) was a big factor, but we had a good plan for it – to stop the point guard and try to control the boards the best way we can,” Hall said. “But some of the things didn’t go our way, as far as rebounds. But we did a good job on the perimeter. We just didn’t finish.”UMass led by 14 with 11:27 left in the game, but the Tigers rallied to make it a one-possession game inside the final minute, thanks in large part to red-shirt sophomore guard Devin Coleman, who came off the bench to score 10 straight points.”We think Devin can do that,” Brownell said. “He’s one of those guys that sometimes just needs to see that first one go in. I wish I’d been smarter to put him in earlier in the game.”Jordan Roper left the game with a head injury early in the second half, and Clemson got only three points from its two-guard position the entire night until Coleman entered the fray with eight minutes to go.”We’re still searching for consistency in our offensive play,” Brownell said. “We’ve got a bunch of guys that have had a good game or two, but solid games where they’re good every night? There have been very few – K.J., most nights, just not tonight; Rod, just about every night.”The Tigers return to action at 7 p.m. Friday at home against Coastal Carolina.”This was a championship game, and we probably weren’t quite ready for the moment,” Brownell said. “But we did a lot of good things on this trip.” 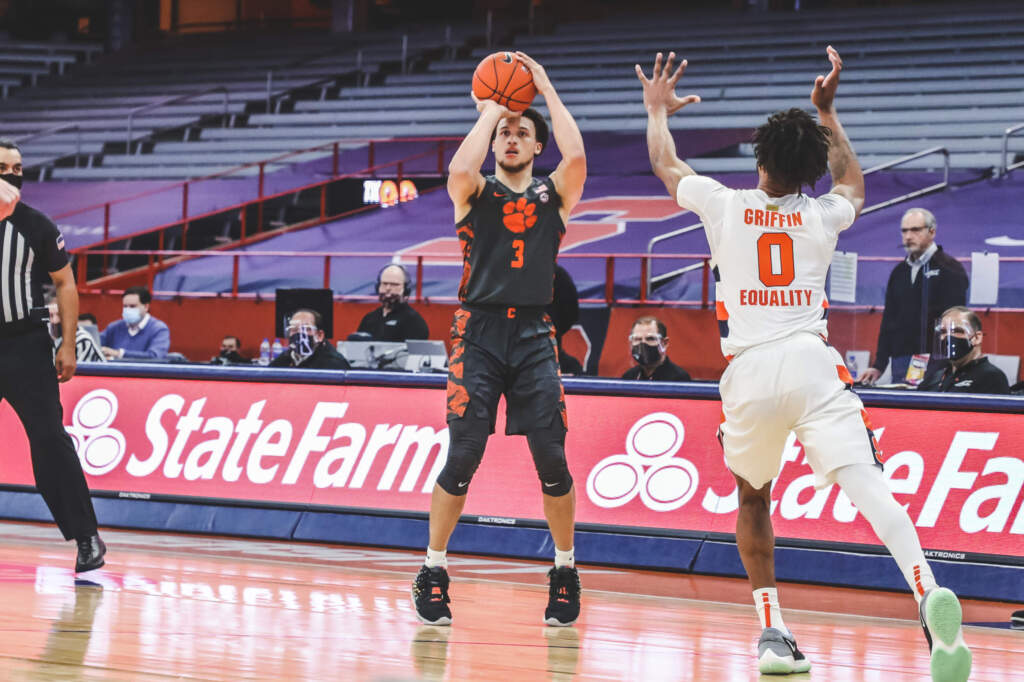 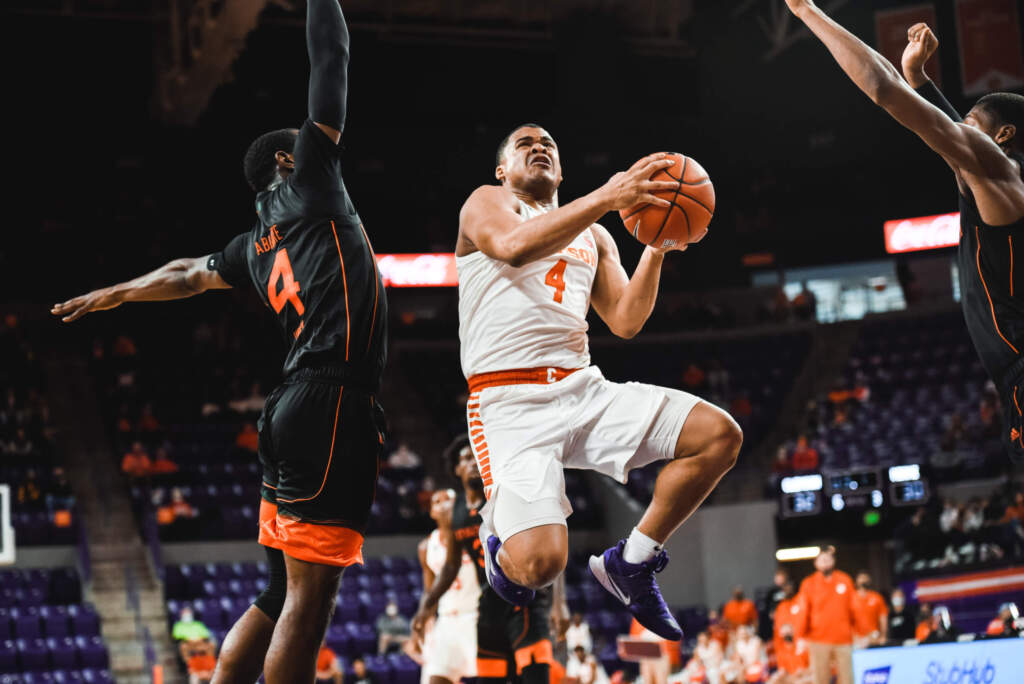