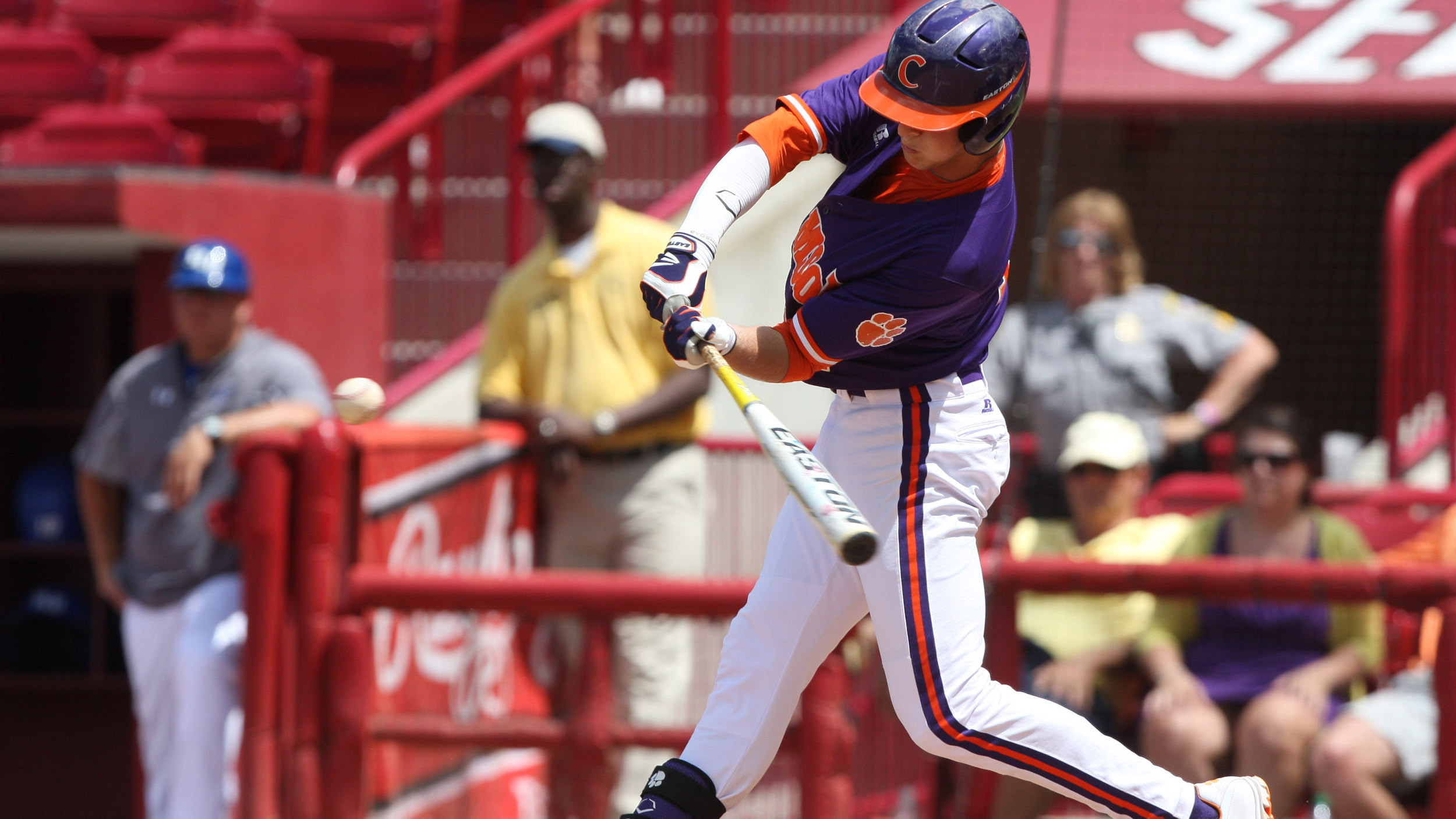 EXCLUSIVE: Wilkerson Picks Perfect Time to Bust Out of Slump

COLUMBIA, SC – Clemson went to the third inning Saturday down 1-0 and looking like its season could be nearing the end of the road. Then Steve Wilkerson hit a ball across it.

The Tigers trailed early against Saint Louis in an elimination game at the Columbia (SC) Regional, but took their first lead of the NCAA tournament when Wilkerson broke out of a 1-for-16 slump and left the yard – literally – in the third inning.

His two-run blast carried the right-field fence and the berm beyond it and ended up on Williams Street to put the Tigers up 2-1. They rolled from there to a 10-2 win that kept their season alive and ended the Billikens’.

“It’s always big to break the ice and get that first run across the plate,” Wilkerson said. “It creates energy in the dugout and kind of gets everybody going. After we scored that first run, we kept passing it to the next guy and just kept building on each other and started swinging it for the rest of the day.”

After going 34 innings – or nine days – without a homer before Wilkerson’s shot, the Tigers then got their second in a span of four batters, as Shane Kennedy ripped one into the concourse beyond the leftfield bleachers to make it 3-1.

“(Wilkerson’s homer) was a pick-me-up for the team and kind of got things rolling in our lineup,” Kennedy said.

The long balls by Wilkerson and Kennedy marked the first time Clemson has hit two home runs in the same inning all season.

Wilkerson, a switch-hitting second baseman from Roswell, GA, came into the game 2-for-20 in the postseason, but broke out of that drought in a major way.

“It felt pretty good, to say the least,” he said. “I haven’t been swinging it particularly well the past couple weeks, but it’s a funny game and one little thing can click for you. Today, a little mechanical thing clicked for me, and I just tried to implement that into the game and did well today.”

After his two-run bomb in the third, Wilkerson put the ballgame out of reach in the next inning with another home run – this one of the three-run variety – that put Clemson ahead 6-1.

That home run gave the Tigers three home runs in the same game for the first time since May 12 of last season, when they achieved the feat against Florida State.

Wilkerson became just the second Tiger to hit two home runs in a game this season – Garrett Boulware also hit two homers against NC State on March 8 – and also gave him five RBIs, a career high. He had never had more than two RBIs in a game prior to this season, but had four on two previous occasions this year – Feb. 17 against William & Mary and May 8 against Furman.

“I’ve always said when you hit in this game, this is a really fun game,” head coach Jack Leggett said. “When you’re not hitting, this game can really break you down. Stevie keeps a pretty even keel. He’s always got a positive outlook on things and always feels pretty good about himself. He keeps his head in the game and keeps on battling.”

While the game ended well for the Tigers, it got off to an inauspicious start.

Clemson had its leadoff man reach as Thomas Brittle hit a fly ball to second base that Saint Louis’ Mike Levine lost in the sun. The play was scored a hit due to an NCAA rule on balls lost in the sun or lights, but was clearly a fortunate break for the Tigers.

They were unable to take advantage, however, as Brittle was thrown out attempting to steal and the next two batters struck out to end the inning.

Saint Louis took the game’s first lead in the bottom of the first, when Mike Vigliorolo hit a sacrifice fly to score Michael Bozarth, who had walked to lead off the inning and moved to third on a double by Alex Kelly.

The Tigers again looked to have something brewing in the second, as Boulware was hit by a pitch to lead off, Kennedy reached on a bunt hit and Tyler Krieger battled back from a 0-2 count to walk and load the bases with nobody out.

But once again, Clemson was unable to push a run across and went to the bottom of the second still trailing 1-0.

Brittle walked to lead off the third for the Tigers – the third straight inning they’d had their leadoff man on base – and this time, Wilkerson delivered a big hit.

After watching two balls go by, the junior turned on one and hit a blast into Williams Street near the Dugout Lounge across the way to give Clemson its first lead of the regional, after it fell to Liberty on Friday afternoon.

“That was a good thing,” Leggett said, “because if we’d come up dry the next inning or two, we’d probably start thinking about it a little bit.”

Wilkerson was at it again in the next inning. This blast didn’t travel nearly as far as the first, but landed in the berm in right field for his second home run of the game.

The Billikens got a run back in the fifth inning on Alex Kelly’s solo homer to make it 6-2, but Clemson scored a run in the eighth and three more in the ninth to provide the final margin.

“We pitched well today and we hit well, and we’re just going to take that confidence and go into tomorrow and continue to do that,” Kennedy said.

The Tigers extended their season by at least a day and will face the loser of Saturday night’s winners bracket game between Liberty and host South Carolina on Sunday at 1 p.m.

Leggett said either freshman lefty Matthew Crownover or senior righty Scott Firth would get the start in tomorrow’s game, but he will wait to find out the opponent before deciding.

Should Clemson win, it would advance to face the winner of tonight’s game at 7 PM.

“We’re just glad to have another day, and we’re looking forward to playing tomorrow,” Leggett said.