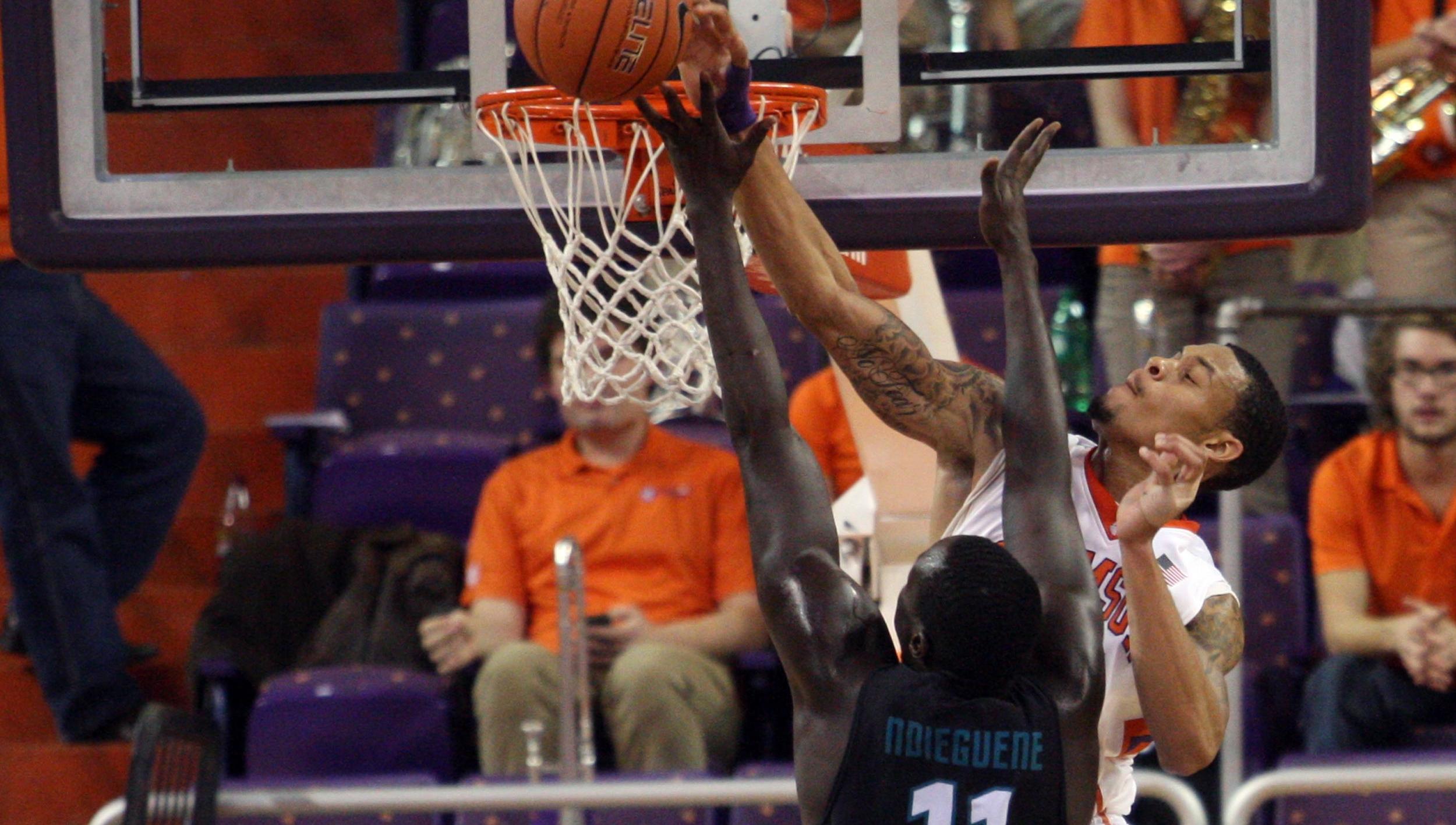 EXCLUSIVE: Tigers Set the Tone on Defense to Rout Chants

CLEMSON, SC – Setting the tone on defense is standard operating procedure under Brad Brownell, and Clemson executed its plan to perfection Friday night.

The Tigers held Coastal Carolina scoreless for the first 9:25 of the contest, opened a 20-point lead in the first half and rolled to a 69-40 win at Littlejohn Coliseum.

“That’s always the game plan,” sophomore guard Devin Coleman said. “Everybody knows Coach Brownell is a defensive coach first. The coaches prepared us well; we knew their personnel and the things that they ran. I don’t want to say it was easy, but we knew what was coming and we were prepared for it.”

K.J. McDaniels led the way with a game-high 22 points – his fifth time with at least 20 in seven games this season – and Coleman joined him in double figures with 14.

With the victory, Clemson snapped a two-game skid to the in-state Chanticleers and head coach Cliff Ellis, who was inducted into the Clemson Hall of Fame this fall. Ellis is the program’s all-time winningest coach with 177 victories from 1984 to 1994.

“I’m very impressed with Clemson,” Ellis said. “Two things stood out to me that were intimidating. Number one, their shot-blocking intimidated us. Number two, they are very superior on the boards. This is a long, athletic team with very good chemistry.”

As Ellis alluded to, Clemson came into the contest ranked eighth nationally in blocks per game (8.0) and had that exact number against the Chanticleers. It owned the boards, as well, outrebounding Coastal 46-27.

Coastal had beaten the Tigers soundly, 69-46, in Conway last year, and Brownell and his staff showed their players film clips from that game prior to Friday’s contest.

The motivational tactic certainly seemed to work like a charm.

Clemson (6-1) scored the game’s first 13 points, including four each from McDaniels and Rod Hall, and staked itself to a 13-0 lead on a three-pointer by Adonis Filer with 12:03 left in the half.The Chants missed their first 10 attempts from the field, six from beyond the arc, as they failed to score on their first 12 possessions.

“That was definitely the plan,” McDaniels said. “We just fed off what happened last year and took that as a learning experience. We knew this team was going to come in and play as hard as they could, so we had to come in and lay it on the line.”

Coastal finally got on the scoreboard on a long jumper by Josh Cameron with 10:35 left until halftime.

The Tigers responded with a three-pointer on the other end from Coleman, and Filer drained his second long ball on the next trip to stretch the lead to 19-2.

Coastal pulled back within 10 with the first points out of the break, but it never got any closer as the Tigers stemmed the tide and went on a 14-2 run to take a 49-27 lead on a three-pointer by McDaniels with 11:00 to go.

Clemson led by as many as 29 points down the stretch on a driving layup by Carson Fields with 46 seconds to go and finished the night with its largest lead of the game.

The Chanticleers eventually rebounded from a dreadful offensive start, but still shot only 28 percent from the floor (15-for-53) and 13 percent from long range (2-of-15).

“We rehearsed (our defensive game plan) in practice a lot – a lot of switching and jump switching – and we knew their personnel,” McDaniels said.

Clemson also forced 16 turnovers, which it turned into 22 points, and the outcome was never really in jeopardy after the Tigers held Coastal scoreless for nearly the first quarter of the contest.

“We were very locked in defensively to the scouting, and I thought we made it hard on Coastal most of the night,” Brownell said. “If we don’t play poorly offensively at the end of the first half, I thought we were going to put it away in the first half. Our defense was outstanding tonight.”