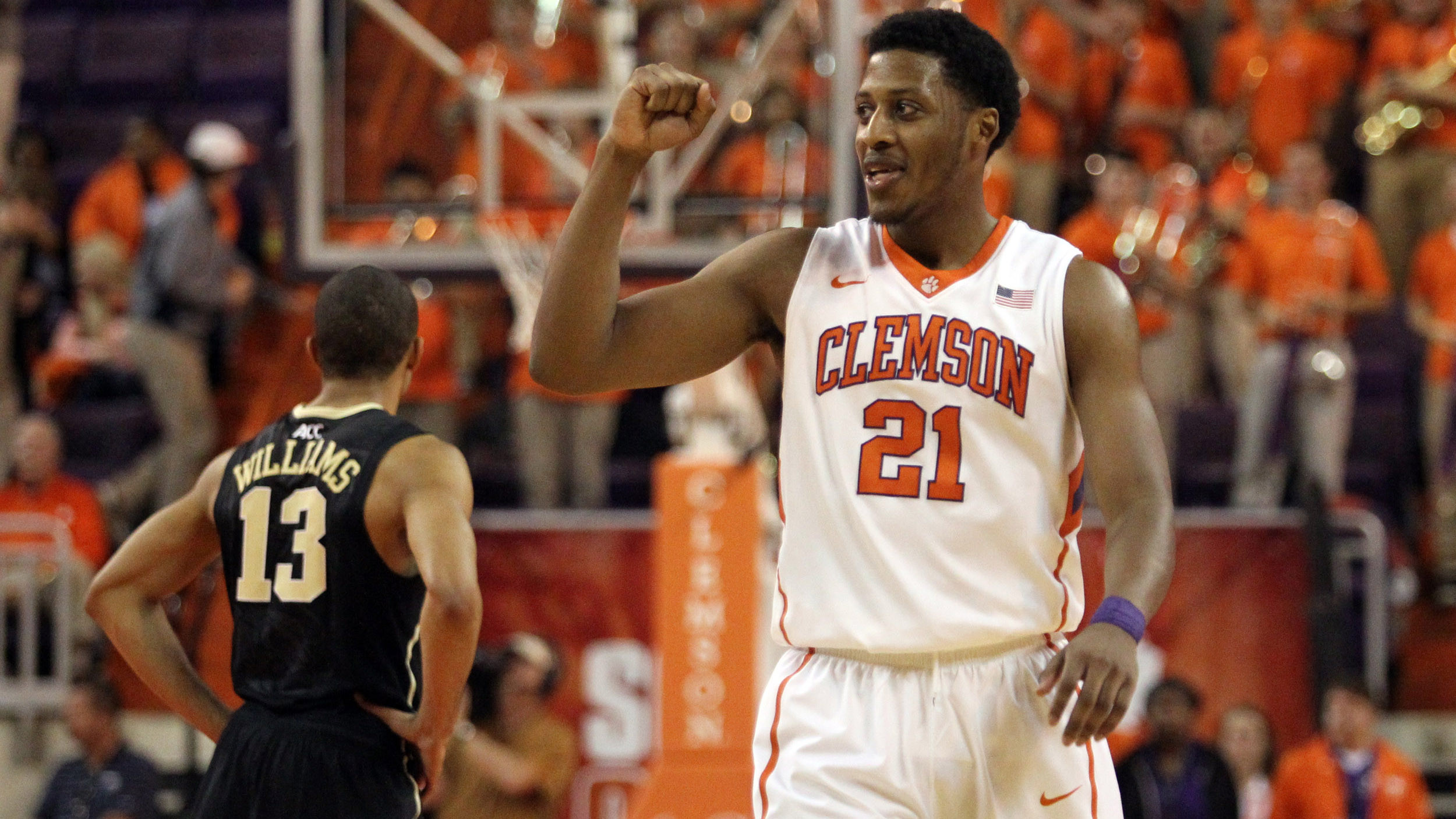 EXCLUSIVE: Tigers Off to Best ACC Start Since ’96-97 Ahead of Brutal Road Stretch

CLEMSON, SC – When K.J. McDaniels was walking out of The Ritz-Carlton in Charlotte, NC, after ACC Operation Basketball in October, he picked up a copy of the media’s preseason poll. As he scanned down the page, then scanned some more, and finally found Clemson’s name as the 14th out of 15 teams, McDaniels laughed.

It’s much easier to laugh about now, of course, but he insists he knew back then how far off the pundits were about the Tigers.

“To prove those people wrong (so far) is a good feeling,” McDaniels said. “It was motivation to me, honestly, to come in here and tell our team to just work. Everybody expected us to be at the bottom, and I wanted to be on top.”

And the Tigers aren’t so far away. With Saturday’s 61-53 win over Wake Forest, they climbed into a tie for second place in the league standings with Pittsburgh and Virginia.

“We’re off to a good start; we’re playing well,” Head Coach Brad Brownell said. “It’s a long-distance race, and we’ve got a lot of rough games ahead.”

No doubt about that.

After the win over Wake Forest, the Tigers will play just one home game in the next 27 days. Five of their next six games are on the road, including trips to Pittsburgh, North Carolina and Florida State in a 12-day span starting Jan. 21, and after hosting Georgia Tech, the Tigers will play at Syracuse and Notre Dame with just one day in between on Feb. 9 and Feb. 11.

Against Wake, Clemson took a one-point lead into halftime despite shooting just 30 percent from the field (6-of-20) in the first half. The starters struggled before the half, as they combined for just 12 points and made just two of 11 shots from the floor.

But as it had done at Virginia Tech three days earlier, the Tiger bench picked up the slack – accounting for 14 points, including a team-high six from Adonis Filer – to provide a boost.

The starters, led by McDaniels, got going after the half, and Clemson pulled away. He finished with 15 points, 12 rebounds and four blocks, while Jordan Roper added 11 points, and Filer and Landry Nnoko chipped in eight apiece.

While McDaniels stole the show, the contributions of other players, such as Ibrahim Djambo, who hit two key three-pointers, were crucial to the victory.

“(Djambo) has a role, and just like a lot of guys on our team off the bench, there’s a role and a niche,” Brownell said, “and if guys will accept their role and niche, then you have a chance to have a good year and good team.”

Djambo’s three-pointer in the first half was his first make from long range since Nov. 29 against Coastal Carolina. His second, which extended the Clemson lead to 52-45 with 4:39 left, gave the JUCO transfer his first game with multiple threes as a Tiger.

“I’m just trying to stay ready every time I have a chance to be on the court,” Djambo said. “They always tell me that you don’t know when your number will be called, so just be ready.”

Another player Brownell pointed to in terms of playing a key role off the bench was junior guard Damarcus Harrison, who made six foul shots down the stretch against Wake.

“Damarcus has accepted his role, defended really well and been opportunistic offensively,” Brownell said. “I’m proud of him for making those six free throws down the stretch. Those were big one-and-ones that put the game away.”

Filer also turned in a solid effort Saturday after he had scored nine points, including a late three-point play that helped seal the win, earlier in the week at Virginia Tech.

“Adonis, coming off the bench and making some good plays, defending and understanding his role – those are things you work really hard to get your guys to do,” Brownell said, “and if guys accept it and buy into those things, then you have a chance to have a good team.”

So far, the Tigers have had a good team. Last year’s team also started relatively well, however, in winning its first four home games in ACC play to open 4-4 in the league and 12-8 overall.

But faced with closing out its season with six of its final 10 games away from home, Clemson won just once the rest of the way to finish 13-18 and 5-13 in the ACC.

McDaniels said he is confident this year’s squad won’t repeat that collapse.

“We’re much more mature, and we have great leaders – not only me and Rod, but Adonis, Rope, Landry, we’re all stepping up as leaders and helping each other,” he said. “If we keep working and keep the right mentality and stay mature, we’ll go far.”

And while McDaniels may have had a good laugh when he saw where the media had picked the Tigers to finish in the preseason, both he and Brownell admitted they understood the reasons.

“I thought we were better than people thought, but there’s no way of not thinking that, in some ways, when you look at our team and look at our roster and who we lost and who we have coming back,” Brownell said. “There were a lot of question marks. We didn’t have a lot of guys coming back who were proven players.