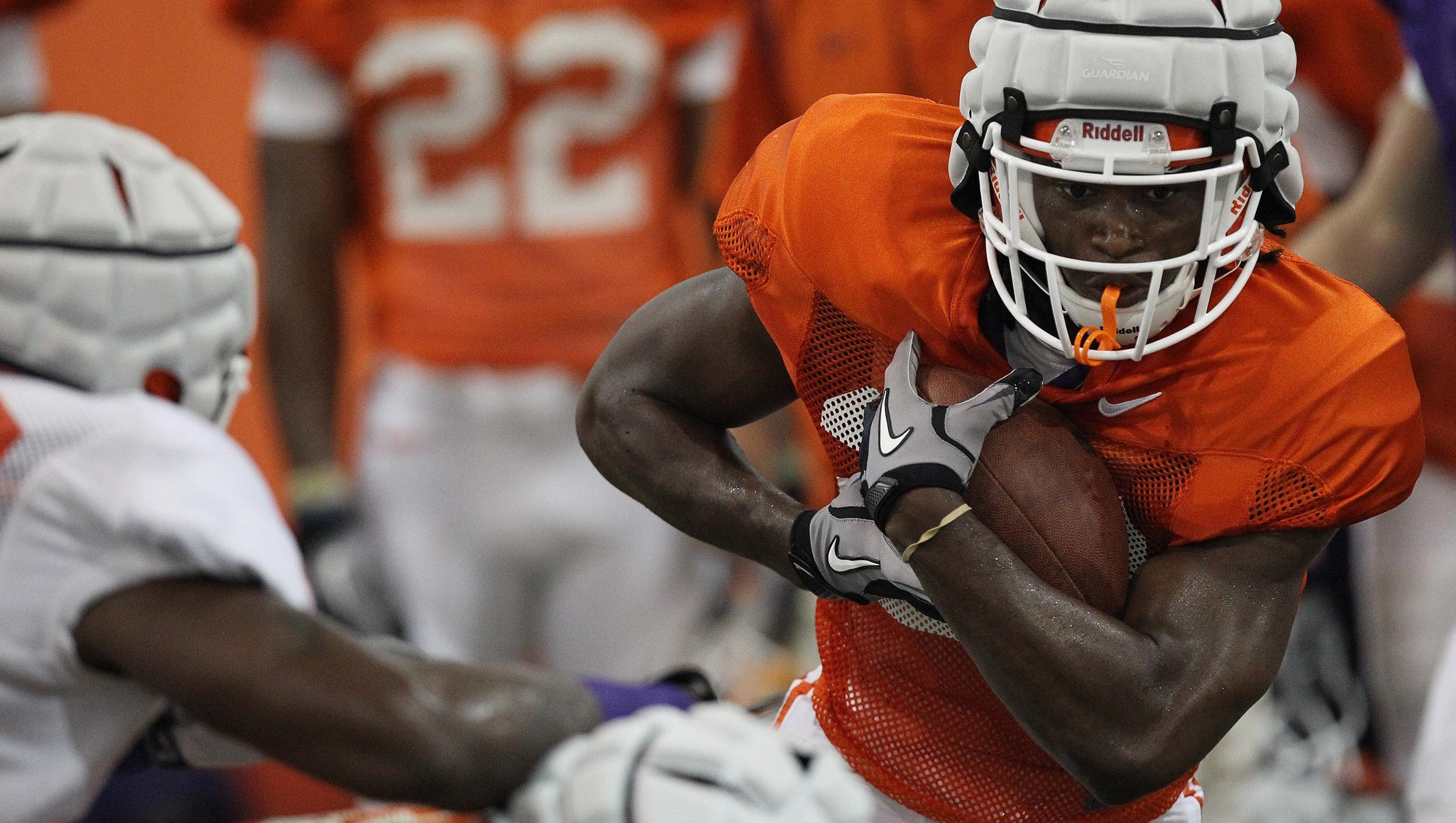 CLEMSON, SC – It was often said in the early days of Clemson’s fall camp that the coaches would know more about their team once the players put the pads on.

“We had some wins on both sides and some losses on both sides of the ball, but we had some consequences today for when they lost,” head coach Dabo Swinney said. “For the first day, I thought they competed hard and got better as the day went and finished really strong.”

One of the highlights early in the practice was the “Paw Drill,” elsewhere known as the Oklahoma Drill, where a running back lines up behind three blockers, and they go head-to-head against three defenders in a confined space.

Swinney said the offense set the tempo in the Paw Drill by winning more often at the point of attack, though the defense later redeemed itself in short-yardage drills later in the practice.

“The Paw Drill is a great drill,” Swinney said. “It’s a toughness drill. It is great for both sides and great for the backs because they have to run through the smoke. There’s nowhere to go. They have to put their head down and hit it, so it’s a very good drill.”

One of the running backs who acquitted himself well in the Paw Drill was freshman Tyshon Dye, of Elberton, Ga. At one point, Dye was lined up behind linemen Patrick DeStefano, Jay Guillermo and Giff Timothy against the Tigers’ top trio of defensive tackles in Grady Jarrett, Josh Watson and DeShawn Williams.

Dye’s blockers opened a hole, and he rumbled through the line and cruised past the goal line, drawing a raucous celebration from their offensive mates watching on the periphery of the drill.

“He’s been outstanding,” Swinney said of Dye. “He’s a big, strong, almost-220-pound back. We haven’t had one of those guys in awhile around here, and he’s been really good, he and (fellow freshman) Wayne Gallman.

“We hit a home run with both of those guys. Gallman is 200 pounds and looks skinny. He’ll be 220 by this time next year, and he’s violent, fast and smart. Tyshon is already a brick house, so he’s just going to get better. Both of those guys have really good football IQs and are very coachable, so we’re really excited about those two guys.”

Swinney admitted it was always interesting to see how freshmen, as well as some of the up-and-coming returning players, performed in such a situation.

“I’m pretty comfortable with some of those veteran guys,” he said, “but I wanted to see how Shaq Lawson, Scott Pagano, Tyrone Crowder, DeStefano – now he’s 290 pounds – and Eric Mac Lain, I want to see if those guys are ready to take another step. It’s always exciting to see them grow.”

One player Swinney singled out for praise after practice was junior Charone Peake, who will be looked upon to help replace the production of record-setting wideout DeAndre Hopkins, who was a first-round NFL draft pick after he led the team with 82 catches for a school-record 1,405 yards and ACC-record 18 touchdown grabs.

“Charone had a great spring, and he’s had a great camp, especially the last couple days,” Swinney said. “Adam Humphries has been out and Martavis Bryant was out today (groin), so Charone has really been awesome. He’s cross-training at our ‘5’ man and ‘9’ man, and he’ll play both all year. I’m just really, really pleased with where he is right now. He’s going to have a great year.”

Peake caught 25 passes for 172 yards a season ago, and said he is well aware of the opportunity he and his fellow receivers have to make an impact in Hopkins’ stead.

“With Nuk gone, that’s a lot of yards and touchdowns gone,” Peake said. “But I feel like we’ve got a complete receiving corps, and we’ll be able to come back and put those yards back together.”

With Shuey having moved over to the WILL linebacker spot, Anthony entered fall camp again atop the depth chart at the MIKE.

“He got beat out, and sometimes it takes a little inspiration to get the transformation you want,” Swinney said. “And his inspiration was the sideline. He’s a great, great player, and it was good to see him respond the right way. He went back to work. He lost his edge a little last year, and I’m not sure he worked as hard as he needed to.

“But he’s been awesome. He came back this spring really hungry and focused. He had a great spring, he’s had a great camp, and he is becoming the leader out there, which is what you would expect Stephone Anthony to do going into his junior year.”

Clemson returns to work Thursday for the sixth of its 28 preseason practices, then will practice twice Friday before holding the first stadium scrimmage of fall camp Saturday morning.

And while Swinney was pleased to finally have his team practice in full pads, he also noted the work the Tigers had done in the previous four sessions was invaluable as well.

“Our practices are tough every day,” he said, “regardless of what we’re doing from a tempo standpoint. We mentally tax these guys every single day, and they better have football focus when they step on this field because that’s just our practice environment.

“Those first four days were huge – a lot of installation and a lot of technique and fundamentals, a lot of drills and full-speed ‘thud’ type of stuff, which is still very physical. But today was the first day we started going to the ground (with tackles), and it’s always good to see how they respond.”

Garry Peters missed practice with an ankle injury.  Freshman wide receiver T.J. Green had an MRI to exam the extent of an injured knee.  More will be known about his status on Thursday.  Peters is expected back on Thursday.