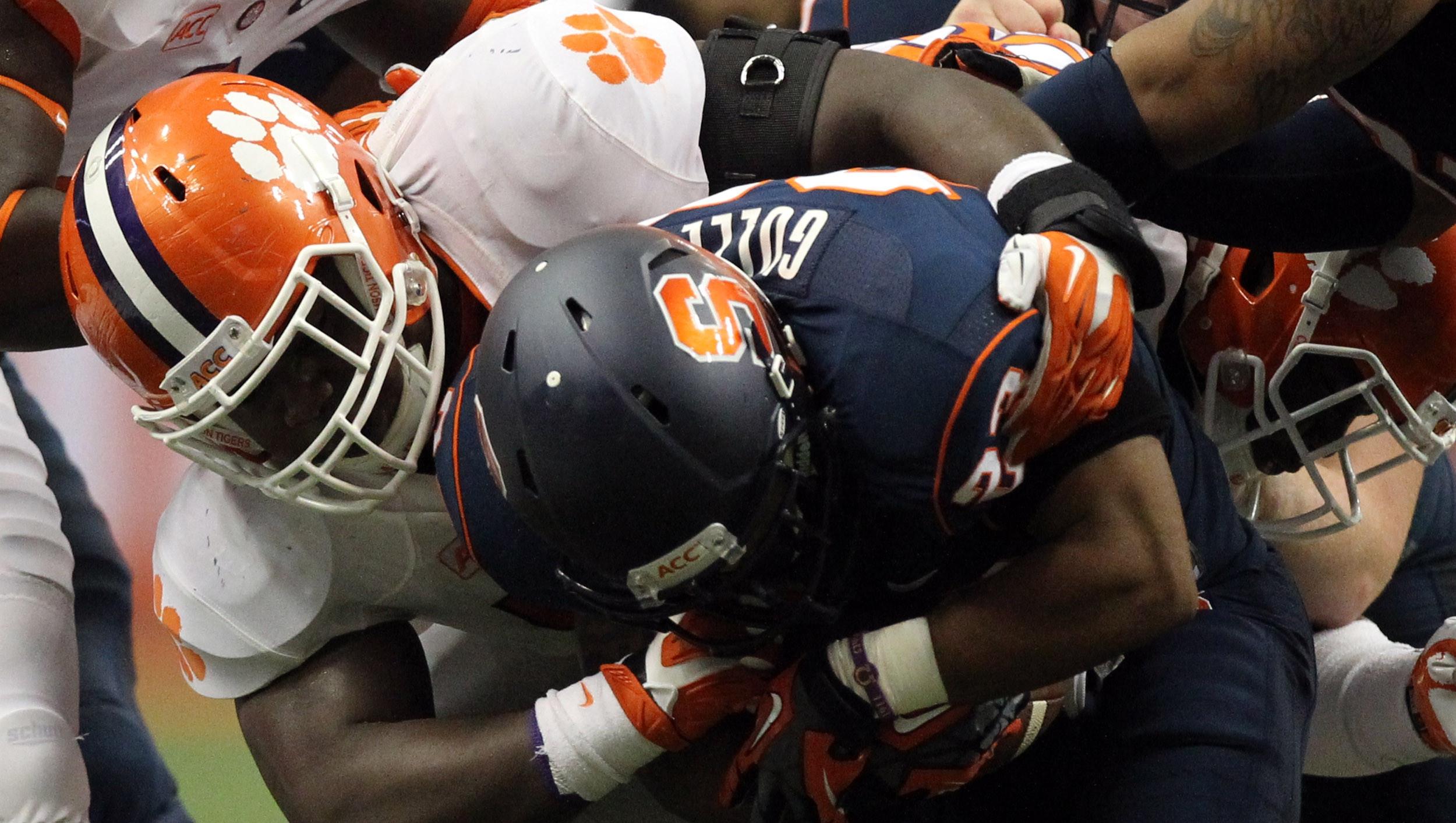 EXCLUSIVE: Tigers’ Defense Making a Name for Itself

CLEMSON, SC – Nearly 27 minutes into Dabo Swinney‘s news conference Tuesday to preview Clemson’s game against Boston College, he was asked about his offense.

A slew of statistics show how much the Tigers have improved on the defensive side of the ball this season, their second under coordinator Brent Venables, but perhaps none speak so strongly as the fact the defense has begun to deflect some of the limelight from their record-setting offense.

“I’m very proud of them,” said the Clemson head coach. “I just think they’re a blue-collar bunch that are very unselfish, and they like playing and like practicing, and they are taking a lot of pride in doing the things you’ve got to do to win.”

Clemson’s defense leads the nation in sacks per game (3.8), ranks second in tackles for loss per game (10.0), second in turnover margin (+1.8 per game), fourth in three-and-outs (6.8 per game) and fifth in third-down defense (opponents are only converting 24.4 percent).

The third-ranked Tigers (5-0, 3-0 ACC) held their fourth straight foe to 14 points or fewer in a 49-14 victory at Syracuse on Saturday, the first time that has happened since 2000.

Defensive tackle Grady Jarrett said he has noticed the defense finally starting to get recognition.

“On TV now, they have Vic Beasley as an impact player, and that’s good that we’ve got somebody on defense finally getting some national attention,” Jarrett said. “Everybody else on our defensive line is getting attention as well. So it’s good for us, and we just want to keep on working and getting better.”

The junior Beasley leads the nation in sacks with eight – nobody else has more than 6.5 – and ranks fourth in tackles for loss with 10.0.

Jarrett led the team with eight tackles in the win at Syracuse, all of them solo stops, and ranks third on the team with 32 tackles for the season – behind Stephone Anthony (54) and Spencer Shuey (48) – not too shabby for a defensive tackle.

When he was asked about Jarrett’s play Tuesday, Swinney said it was the first time he could recall being asked in a news conference about the player he called the “heart and soul of our defense.”

“Now people know who Grady is,” Swinney said. “That’s the first time anybody has ever talked about Grady. He is a great player. Everybody knows Vic now. They’re making up new names for him now. Corey Crawford. These guys are starting to create a little bit of an identity for themselves defensively. And I love that.”

If the Clemson defense has struggled in one area, however, it has been stopping the run. The Tigers are giving up 171.2 yards per game on the ground, a statistic that wasn’t helped by the 323 rushing yards they gave up in the Carrier Dome.

With Boston College (3-2, 1-1 ACC) set to visit Death Valley on Saturday (3:30 p.m., ABC/ESPN2), boasting the nation’s leading rusher in bruising, 227-pound senior back Andre Williams, the Tigers know they must get their run defense fixed fast.

“On defense, when you make a critical mistake you usually pay for it … but it’s not a major concern right now,” Swinney said. “I think defensively I’m very encouraged in every regard.  From where we were this time last year when we went up to Boston College … we’re a totally different team defensively than we were this time last year. So, as long as we’ll continue to improve and continue to be coachable, we’ll be fine.”

It’s not that the Tigers have consistently struggled against the run, as evidenced by how successful they have been in stopping opponents on third down and in the red zone.

Rather, the defense’s struggles against the run have largely stemmed from big plays given up due to missed assignments and missed tackles.

Clemson has given up 10 run plays of 20 yards or longer on the season, including a 75-yard touchdown by Georgia’s Todd Gurley in the opener and runs of 66, 56 and 38 yards to Syracuse last week.

“Some calls we have will get miscommunicated and then half of us will do the wrong thing, we’ll be in the wrong gap,” Jarrett said. “But these are all very fixable issues, and we’ve got to fix it because we can’t afford the big plays. It seems like every other game, one squeaks out on us that we know (shouldn’t happen), and it kind of skews our stats a little bit and throws us off. So, we’ve got to get that fixed ASAP.”

While Boston College’s offense is built around pounding Williams in the run game, it is not a one-dimensional attack.

First-team All-ACC receiver Alex Amidon comes in off his second 100-yard receiving game this season – a 48-27 win over Army – while senior quarterback Chase Rettig has started 37 straight games for the Eagles and became just the fourth 3,000-yard passer in school history last season.

With that, Clemson sophomore safety Robert Smith knows the defense can’t afford to get carried away with focusing its attention on stopping the run.

“They are similar to Georgia,” Smith said. “Georgia did a whole lot of play-action, and anytime you’re at safety, any week, you have to have very disciplined eyes. You can’t just be peeking in the backfield and put your eyes somewhere they’re not supposed to be because play-action can draw you in, and then one step, that can be a touchdown.”

The Tigers held Boston College to 51 yards rushing in a 45-31 road win last season and limited Williams to 61 yards despite giving up a 30-yard touchdown to him on the Eagles’ first possession.

But BC has a new head coach in Steve Addazio this season, and Venables said his defense won’t be able to glean much from last season’s meeting at Alumni Stadium.

Of course, the same could be said for the Clemson defense.