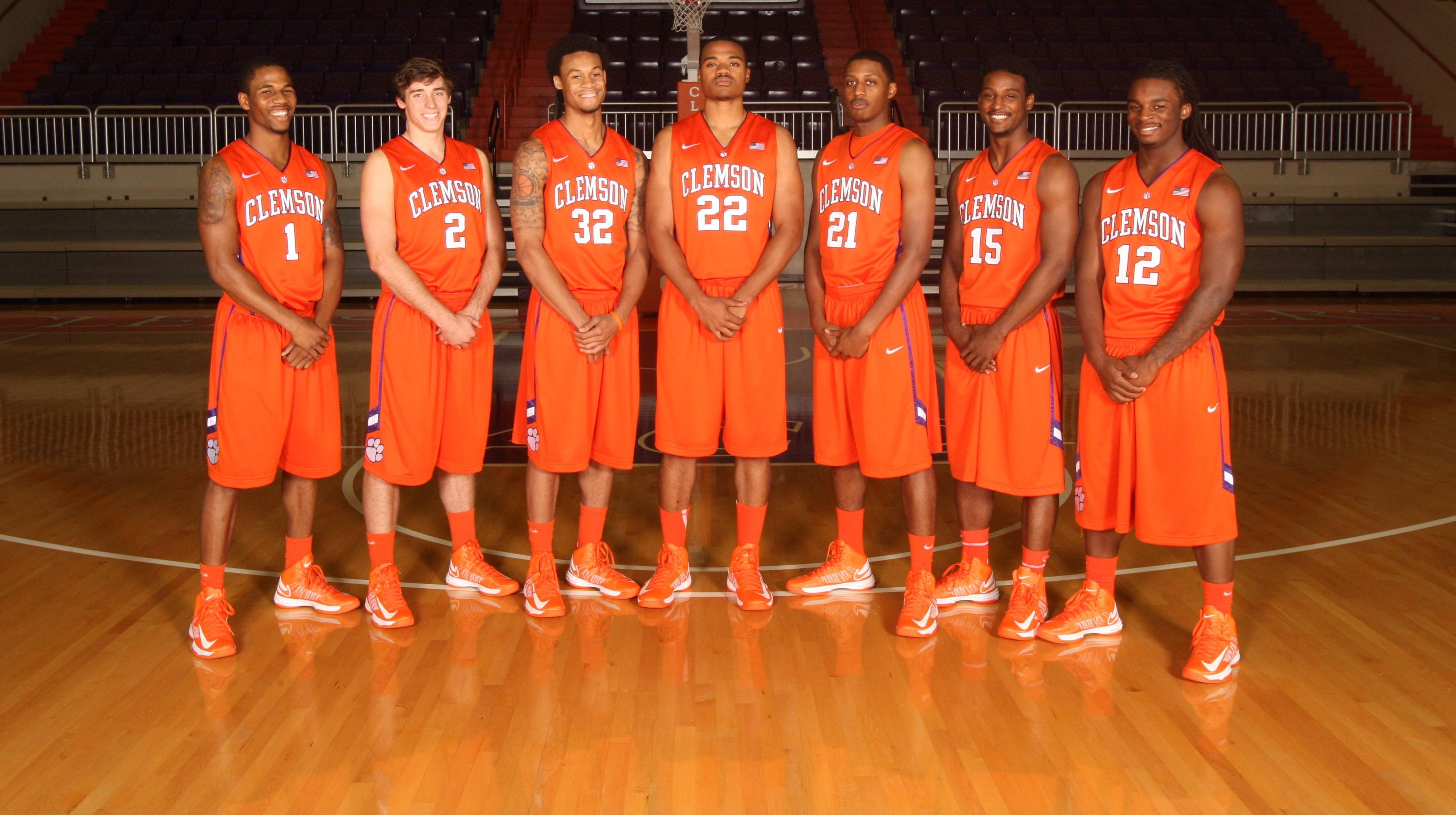 CLEMSON — Brad Brownell has a saying: “Leadership doesn’t discriminate,” which means a player doesn’t need to be an upperclassman to be a team leader. As the head coach of a Clemson basketball team with 12 freshmen and sophomores, one might argue Brownell’s mantra is wishful thinking. But the important part is his players believe it true, particularly the sophomore class that comprises six of the eight veterans — along with seniors Milton Jennings and Devin Booker — on the Tigers’ roster. “We’ve definitely had to step up,” sophomore forward Bernard Sullivan said Tuesday at the team’s media day at Littlejohn Coliseum. “There are not too many teams that are in our situation, with only two seniors and then 12 underclassmen. But I’m glad to be looked at as one of the older guys and be able to help these younger guys out.” Sullivan played in 28 of the team’s 31 games last year, scoring 1.4 points a game, but was limited to 7.5 minutes per contest. The 6-foot-7 forward suffers from asthma, which affected both his conditioning and his effectiveness. Perhaps the most ballyhooed of the Tigers’ 2011 signing class, Sullivan says he has new medication that has helped him deal with his asthma, as well as an improved dedication to conditioning, after admittedly being able to largely coast through his high school career on talent, and believes he’s ready to be a major contributor when the team’s first official practice gets underway Friday. “I believe I can do a lot of things, whether it’s score, pass, rebound, dribble,” he said. “I really worked on that when I was younger — just having an all-around game — and with my endurance better, I’ll actually be able to do those things for a longer period of time.” Undoubtedly the most eye-catching of last year’s freshmen was K.J. McDaniels, a 6-foot-6 wing from Birmingham, AL, who dazzled at times with his dunks and also flashed the potential to be a volume scorer, but only occasionally showed the consistency needed to be a reliable contributor. McDaniels, who played in 30 games a year ago with one start, averaged 3.9 points per contest, the most of any of the returning rising sophomores. He agreed the team’s youth has challenged he and his classmates to mature into leaders in short order. “It has, but I think we can step up and do that and become leaders as young players,” McDaniels said. “It’s just being there with them and guiding them the right way and letting them know what we learned as freshmen. Just for the freshmen to be able to catch on real quick is a big stepping stone for them.” The member of the sophomore class that made the quickest impact last season was guard T.J. Sapp, who played in 30 games, starting nine, and averaged 3.6 points per game. But Sapp suffered through an extended shooting slump after a hot start, and admits his confidence took a significant hit when his shots stopped falling as a freshman. “It got to me a little bit,” he said. “We’re human, so little things like that will hit us in a way. I just tried to block it out because I didn’t want my own personal failure at that time to mess up the whole team. We’re all going to go through some adversity, so I just had to get through it as best as I could.” Another sophomore, Rod Hall, was also a significant contributor for the Tigers last season, playing in all 31 games, starting nine, and averaging 3.8 points per contest. The 6-foot-1 Hall is perhaps the leading candidate to start at point guard entering practice. Walk-on guard Carson Fields is the final returning player in the sophomore class and played in eight games a year ago. One sophomore who will likely miss a large portion, if not all, of the 2012-13 season is Devin Coleman, Clemson’s leading scorer in the 2012 ACC Tournament game against Virginia Tech.  He suffered an Achilles tear during a summer workout.  Coleman had come on strong at the end of the 2011-12 season. Hopefully offsetting Coleman’s injury, there is one more player in the Tigers’ sophomore class, guard Damarcus Harrison, who transferred from Brigham Young after finding himself without a scholarship when his Mormon mission was delayed. A Greenwood native, Harrison averaged 3.2 points per game last season, and scored a career-high 12 points against Iona in the NCAA Tournament. The 6-foot-4 guard still plans to pursue his mission after this season, but he hopes to return to Clemson to play out his final two years of eligibility upon its completion. He also believes he has the skill set to help the Tigers prior to departing. “Mostly athleticism, scoring and defense,” he said, when asked what he brings to the Tigers. “I can do a lot of things. I’m very versatile, so I can be a spark when they need it. Playing at BYU, there were a lot of transition three-pointers, so I’m pretty comfortable shooting those.” Brownell has already seen evidence of his sophomore class embracing the role of leaders for the Tigers, and specifically cited the good work of Sapp and McDaniels as players who had gone out of their way to make sure their teammates got together for regular pick-up games this summer. “That’s one way we’re trying to show leadership, just by getting everybody together all the time and making sure we’re always in the gym,” Sapp said. “Another way is by just staying on top of each other, by asking ‘Have you been to the gym to get up shots yet?’ And those are just different ways we show leadership by action.  “And when we work out, sometimes we try to stay and just show support for other teammates who are working out, just showing signs of leadership that we’re all here for one another.  “It doesn’t just take two seniors to be leaders. Everybody on this whole team can be a leader for each other.”