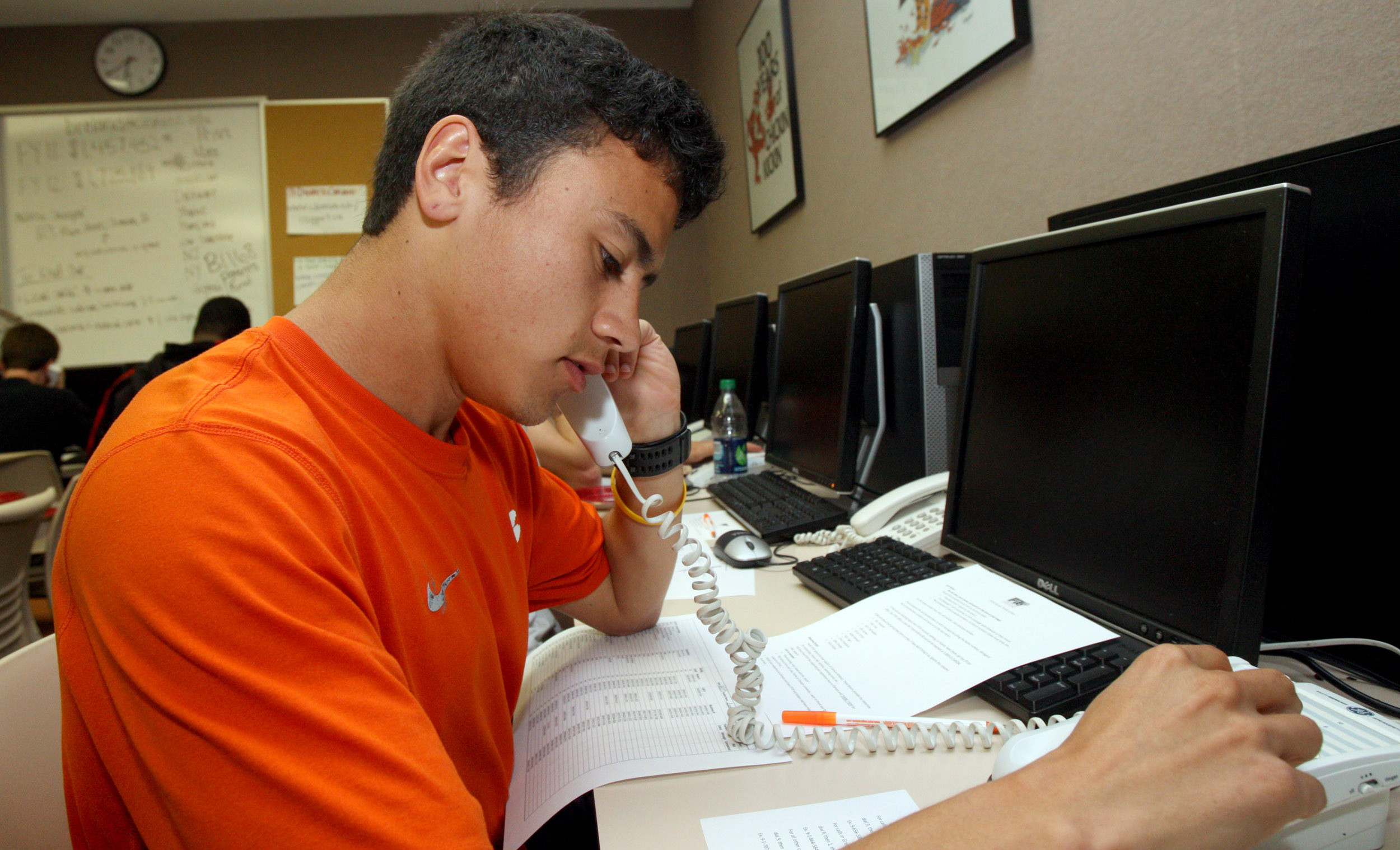 CLEMSON, SC – One of the purposes of Clemson’s Student-Athlete Advisory Committee is to give the university’s athletes a voice when it comes to issues that affect them, and this week that voice is being used to say thanks.

This year’s SAAC Thank-a-Thon began Monday night and continues Tuesday at the University Foundation building on campus with 100 Clemson athletes – 50 each day – taking time out to call as many IPTAY donors as possible to express their gratitude for the ways those donations have enriched their college experiences.

“That’s one of the great things about IPTAY,” said Brittney Waller, a senior thrower on the track and field team who helped head the initiative. “As student-athletes, we don’t think about our facilities and how we’re able to do a lot of the things we do – traveling, maintenance, construction, those kind of things – so it is very nice to have IPTAY, and we’re really thankful to have donors who do support us and who do want us to be successful on and off the field.”

For the Thank-a-Thon, the athletes are split into two shifts per night, and all of the university’s sports are represented, with teams such as men’s and women’s soccer, track, volleyball and golf manning the phones Monday, and others such as football and baseball taking over tonight.

Starting with the two SAAC members from each of the teams – with the exception of football, which has two representatives from both the offense and the defense – they then recruited as many teammates as possible in an effort to place “about 12,000” phone calls over the two days, according to Waller.

The host organization, SAAC, fulfills an NCAA requirement for institutions to ensure that student-athletes have a voice when it comes to decisions that affect them.

“We don’t have a lot of opportunities within our time here to really say, ‘OK, I want to be a leader on our team,’ but also to take it from the field of play to the classroom and on campus,” Waller said. “You are a representative, and that’s what I love about SAAC.”

For the first time, the event will be held twice this year, this one and again in the fall semester. Cory Thalheimer, the president of SAAC and a senior thrower on the track and field team, is now involved in his third Thank-a-Thon and says the fun part of the event is the excitement that is evident when someone answers the phone and learns that a Clemson student-athlete is on the other end.

“It varies from call to call, but a lot of times you’ll hear the surprise in their voice that they’re actually getting a call from an athlete,” he said. “There are definitely some of them that want to ask, ‘How’s your season going? How’s the team doing? What’s it like on campus,’ little things like that.”

Morgan Hert, a rising senior goalkeeper for the women’s soccer team who helped to organize the event, is also a Thank-a-Thon veteran, and admits the experience can be “a little nerve-wracking at first.”

“You want to make it sound personal and not just like you’re reading a script,” she said. “That’s what I try to do. Then once you figure that out, you have a conversation with somebody and they say, ‘Oh, my daughter plays soccer. She’s 12.’ And then it’s, ‘Well, bring her to the games.’ And you can help bring more publicity to your own team that way.”

And with that, Hert says the important part of the event is making sure the IPTAY donors are aware that the student-athletes appreciate the donations they make.

“I don’t think people really realize how crucial IPTAY is for our university,” she said. “We’re a very large athletic university and we have a lot of great athletes here, but without IPTAY we wouldn’t have the academic help, the facilities, the equipment, to help us become this powerhouse that we are.

“It’s really awesome to have this hands-on experience, a more personal experience with the IPTAY donors, because they don’t really get that one-on-one time with an athlete that they might see on the field.”