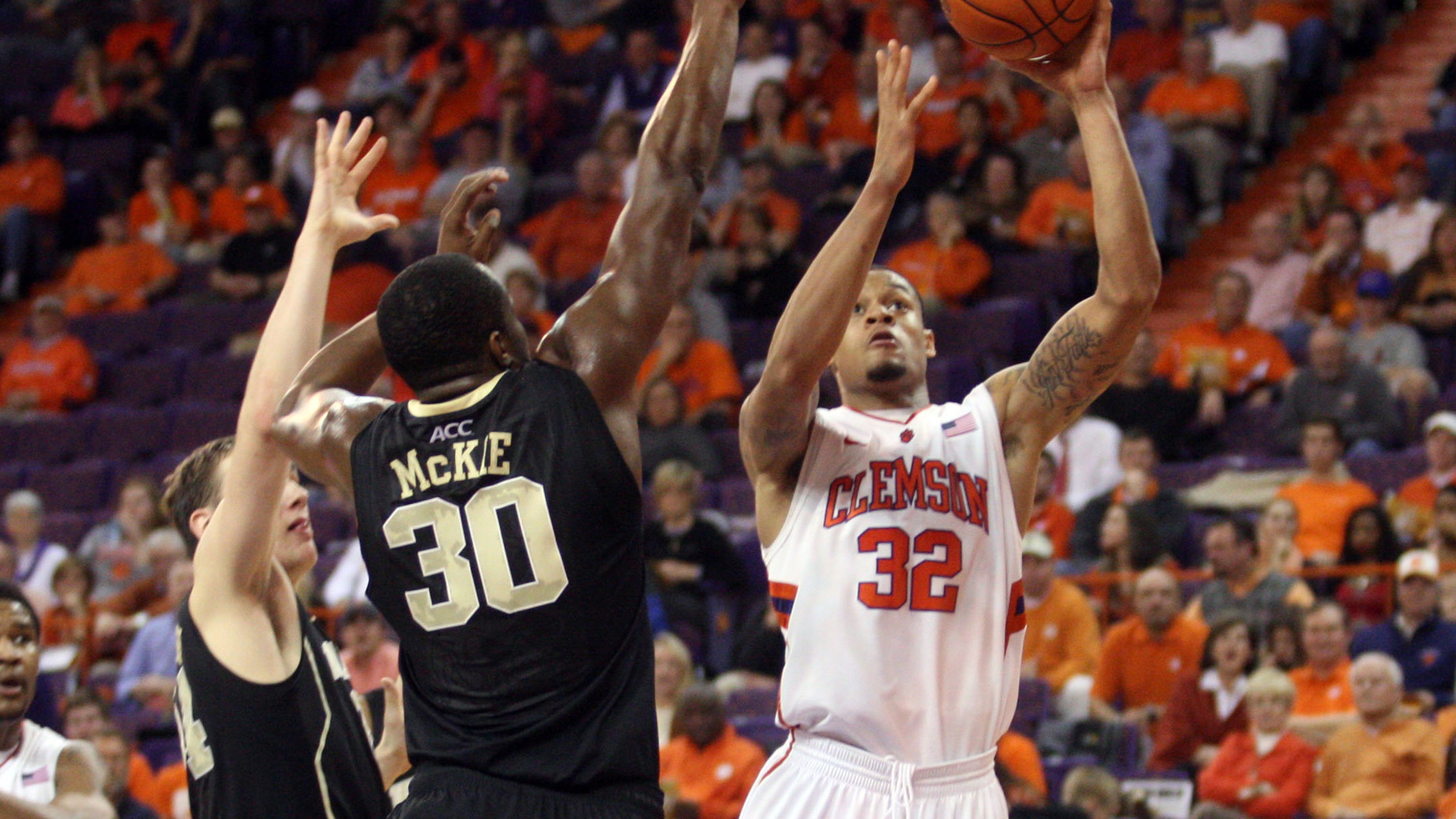 Exclusive: McDaniels the Life of Tigers? Block Party Against Wake

CLEMSON — Clemson played host to a block party at Littlejohn Coliseum on Tuesday night. K.J. McDaniels was the life of the party, while Wake Forest had the misfortune of being the guests of honor. The Tigers blocked 11 shots — seven by the hyper-athletic McDaniels — as part of an outstanding defensive performance that fueled a 60-44 win over the Demon Deacons. “I’m always hungry for blocks, and I think it rubs off on the team,” McDaniels said. In addition to his prolific block total, McDaniels finished with a game-high 14 points on 6-of-13 shooting — which included a few of his trademark highlight-reel dunks — and also pulled down a team-high nine rebounds for the Tigers (10-6, 2-2 ACC). Clemson Head Coach Brad Brownell pointed to the up-tempo nature of the game as a primary reason for the sophomore forward’s stellar outing offensively. “When the game is in transition, he’s a better player,” Brownell said. “And because of the blocks and because they had so many misses, it leads to more transition, which gets him out on the break and got him a few shots and gets him dunks. That’s where he’s at his best, is in transition. And I’ve said from the beginning of the year, what we’ve got to do is get him to be a better half-court basketball player.” Clemson’s defensive excellence wasn’t limited to just blocked shots, however, as it held Wake to 24.6 percent shooting for the game, the second-best performance in field goal percentage defense against an ACC opponent in school history and the best since 1964, which also came against Wake. “It’s the personality of our team, and it’s the personality I want for our program — toughness and tough-mindedness and attention to detail and not being happy when teams score,” Brownell said. “And so, we obviously pay a lot of attention to that. Our players know that’s where our bread is buttered, and when we do that, we have chances to beat good teams.” Clemson limited the Demon Deacons to just three field goals in the final 13:21 of the first half, from the point which the Deacs held their final lead of the game at 11-9. From there, the Tigers went on a 20-5 run across the next 11:12 and led by as many as 13 in the first half after consecutive slams in transition by McDaniels — both on assists from Rod Hall — made the score 31-18. Clemson took a 31-21 lead into halftime after limiting Wake to 25 percent shooting (7-of-28) in the first half. For proper perspective on how much the Tigers disrupted Wake’s offense in the first half, the Deacs had just one assist to their credit in the opening stanza. “They owned the rim,” Deacons Head Coach Jeff Bzdelik said. “We had opportunities around the rim, but they erased those opportunities by blocking shots. I thought that shook our players, and consequently we missed some good looks — and we were constantly then on our heels.” The Tigers quickly extended their lead out of the locker room thanks to McDaniels. The sophomore banked in a jumper for the first bucket of the half and then knocked down a three from the wing in transition to make the score 36-21 and force Wake Forest to take a timeout with 17:28 to go. McDaniels admitted after the game he was determined to be more assertive on the offensive end than he had been Saturday against Virginia, when he scored just six points. “My last game I had been suffering from headaches, so I just knew I had to come in and be more aggressive,” he said. As good as Clemson was defensively in the first half, it got off to an even better start after halftime. The Tigers held Wake scoreless for the first 4:23 out of the locker room, as the Deacs went 0-for-9 from the field to start the second half before finally breaking their drought when McDaniels was whistled for a controversial goaltending call that made the score 38-23. The Tigers led by as many as 18 when Jordan Roper knocked home a three-pointer from the corner that made it 56-38 with 3:00 left, and cruised to the win from there. McDaniels said he believes the performance could be a momentum-builder for the Tigers moving forward. Next up is No. 15 NC State at 6 PM on Sunday in Raleigh, NC. “I believe last year once we started winning games and getting our confidence, we started winning more games,” he said. “So if we do that now, this early in the ACC schedule, we’ll be able to get a few good wins.”