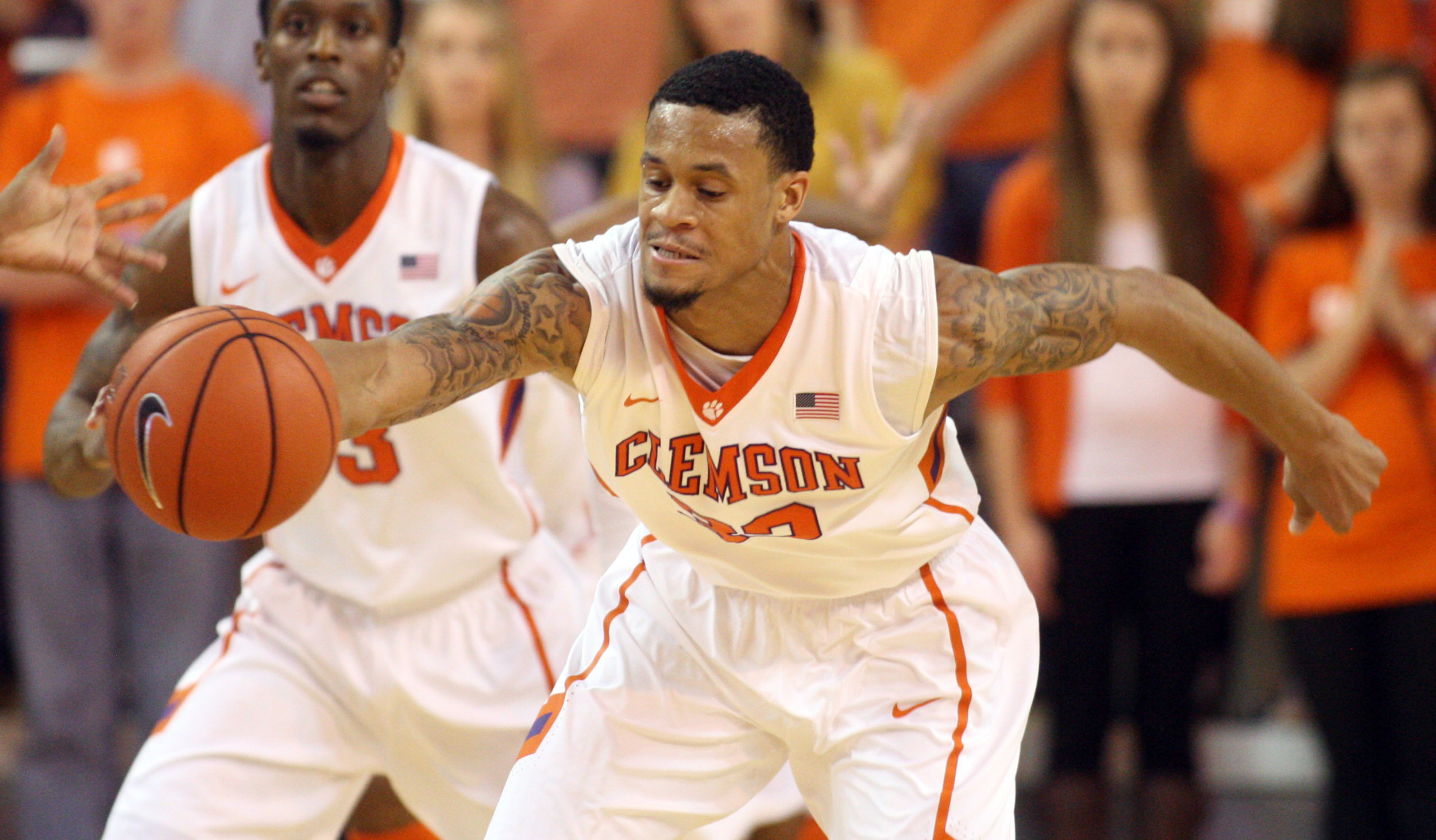 EXCLUSIVE: McDaniels Sets the Tone for Tigers in Season Opener

CLEMSON, SC – Sitting alone Friday afternoon on the back row of the lower bowl of Littlejohn Coliseum watching the Clemson women’s game and listening to music on his headphones, K.J. McDaniels imagined himself coming out and immediately providing a spark for the Tigers when it came his turn to take the court that night.

“I had my music playing, and it had me in the zone, getting ready to play,” he said. “I was just up there thinking about how I could go out there and help my team out the most and be as aggressive as I could.”

Head Coach Brad Brownell said during the offseason he wanted McDaniels to embrace his role of Clemson’s best player this season.

The 6-foot-6 wing scored the first 11 points of the campaign for the Tigers, who took an early lead over Stetson and rolled to a 71-51 win in the season opener.

“I haven’t seen anything like that before, especially for him,” teammate Damarcus Harrison said. “He just kept knocking down shots. If he continues to do that this season, we’re going to be a good team.”

McDaniels finished with a career-high 20 points on 8-of-13 shooting and also added seven rebounds, a block and a steal.

By the end of the game, 10 different Tigers had scored and three finished in double figures – McDaniels, Rod Hall (11) and Harrison (10).

“I was just trying to set it off for my team and get my team rolling,” McDaniels said. “I believe as a leader I have to go out there every night and get them ready for the game.”

On Clemson’s second possession of the game, McDaniels drained a three-pointer for the team’s first bucket. He knocked down two more threes on the Tigers’ next two trips down the floor and then stepped inside the arc to bury a jumper to give his squad a quick six-point edge.

With that, McDaniels set a school record for most consecutive points by one player to open the season, besting the previous best of 10 by Elden Campbell in 1987-88.

“I think it really just settles everybody down, relaxes them, and (they can go), ‘Hey, OK, we’re into the game. Our guy is playing well,'” Brownell said. “It kind of lets everybody else do their thing after.”

Stetson’s Aaron Graham also got off to a hot start for his team, scoring its first 10 points to keep the game close at 13-10 on a jumper with 15:22 left in the first half.

But after McDaniels took control by supplying the first 11 points, his teammates got into the act.Hall and Jordan Roper combined to score the next six points to stake Clemson to a 17-10 lead. That fueled a 27-2 run for the Tigers across the next 11:36 to put the game away early.

Stetson actually outscored Clemson 36-25 in the second half, but Brownell said he was still very pleased with his squad’s performance in the season-opening win.

For the fourth straight season – all under Brownell – the Tigers were tasked with replacing their leading scorer from the previous campaign. Devin Booker led the team last year at 13.1 points per game.

With the team looking to improve upon last year’s 13-18 finish, the onus was clearly on McDaniels to emerge as the primary scorer this season. He was the only returning Tiger who averaged in double figures (10.9 points per game) last season, and is also the team’s leading returning rebounder and shot blocker.

McDaniels set a new career best with his fourth three-pointer of the night with 1:28 remaining.

“I’ve said that our strength is we can go seven, eight, nine, 10 deep, and hopefully those guys are as good or better than the guys we’re playing against at those positions,” Brownell said. “You certainly need your good players, like K.J., to have a big game, especially against really good competition. But when he plays well like that, it sets the tone for us and establishes some things for other guys and gives them confidence.”