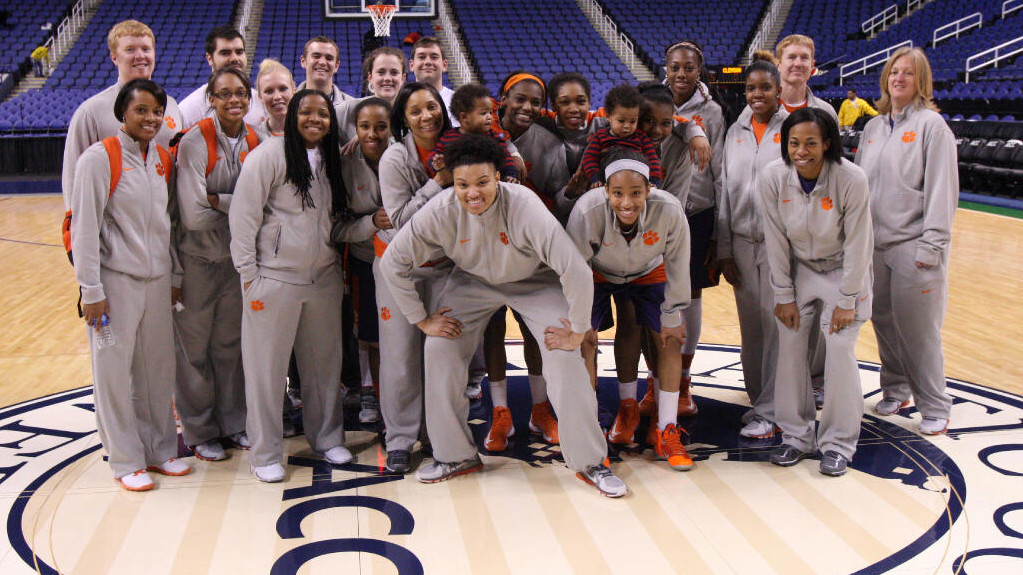 GREENSBORO, N.C. – The Clemson women’s basketball team may not have had the season it hoped for, but the way the Lady Tigers see it, that season is over and a new one is beginning.

“We’re just trying to have a fresh mind, new focus and just go out there and do what we’ve got to do,” sophomore guard Nikki Dixon said after practice Wednesday.

The Lady Tigers will face N.C. State in the opening round of the ACC Tournament on Thursday at 2 p.m. The team practiced Wednesday morning at UNC Greensboro and then worked out at the tournament venue, Greensboro Coliseum, in the afternoon.

Clemson’s upcoming opponent is also its most recent one, as the Wolfpack won 63-47 at Littlejohn Coliseum on Sunday, the same day the pairings were announced.

“It is a new season – that’s definitely how we’re approaching this,” Clemson head coach Itoro Coleman said. “We talked about it after the game versus N.C. State, talked about it these past few practices. You live for these moments, just because it all depends on which team shows up at the right moment.”

N.C. State also won the meeting in Raleigh, N.C., in February, but Clemson feels it had chances to fare better in both contests, most recently trailing by just two points at 39-37 in the second half before the Wolfpack pulled away with an 18-3 run.

“We just played them, so we basically remember all their plays; we know what they are going to do,” sophomore sharpshooter Kelly Gramlich said. “It’s the same game plan pretty much. We’ve just got to go out there and execute it.”

Despite losing both regular-season meetings this year, the Lady Tigers believe they are more than capable of producing a similar postseason outcome this time around.

“There’s little things we could have done to beat N.C. State the first or second time,” Dixon said. “So the fact that we have another opportunity – it’s fate.”

In order to win, however, Clemson will need to avoid fading down the stretch. With just eight players on the roster, the Lady Tigers have frequently given even their toughest foes fits – including going into halftime tied with powerhouse Duke at Littlejohn – before wearing down in the second half.

“We’ve been playing with eight all year, and we’re used to it by now – so that can’t be an excuse,” Gramlich said.

But perhaps even more than fatigue, Clemson was undone by dribble penetration in Sunday’s game against N.C. State. Coleman said whether she put her team in a man or zone defense, the Wolfpack guards were consistently able to drive into the lane, collapse the defense and then kick the ball out to the perimeter for open shots.

“Obviously we want to do a better job of guarding the penetration, we want to do a better job on the boards – we gave up too many offensive rebounds – and (Myeshia) Goodwin-Coleman came in and she hurt us,” Coleman said. “She was 4-6 from the three-point line. We did a great job on Marissa Kastanek, which that was our focus, but we have to be aware of the shooters that are hot at the moment.”

And while the Lady Tigers will once again be at a disadvantage in terms of sheer numbers, they believe their lack of bodies has also helped them build a unique chemistry over the course of the season.

“We’ve definitely become closer,” Gramlich said. “This is the closest team I’ve been on at Clemson, and I feel like we’re poised to get this win and we’re ready.”

Having an eight-player roster isn’t exactly ideal for a tournament situation, as with a win Clemson would have the tall task of facing the top-seeded Blue Devils on Friday, but Dixon said they couldn’t afford to worry about that just yet.

“We go in with a different mindset and go in with all the different warriors we have, and we just battle,” Dixon said. “That’s what we’ve got to do here – it’s a new season.”