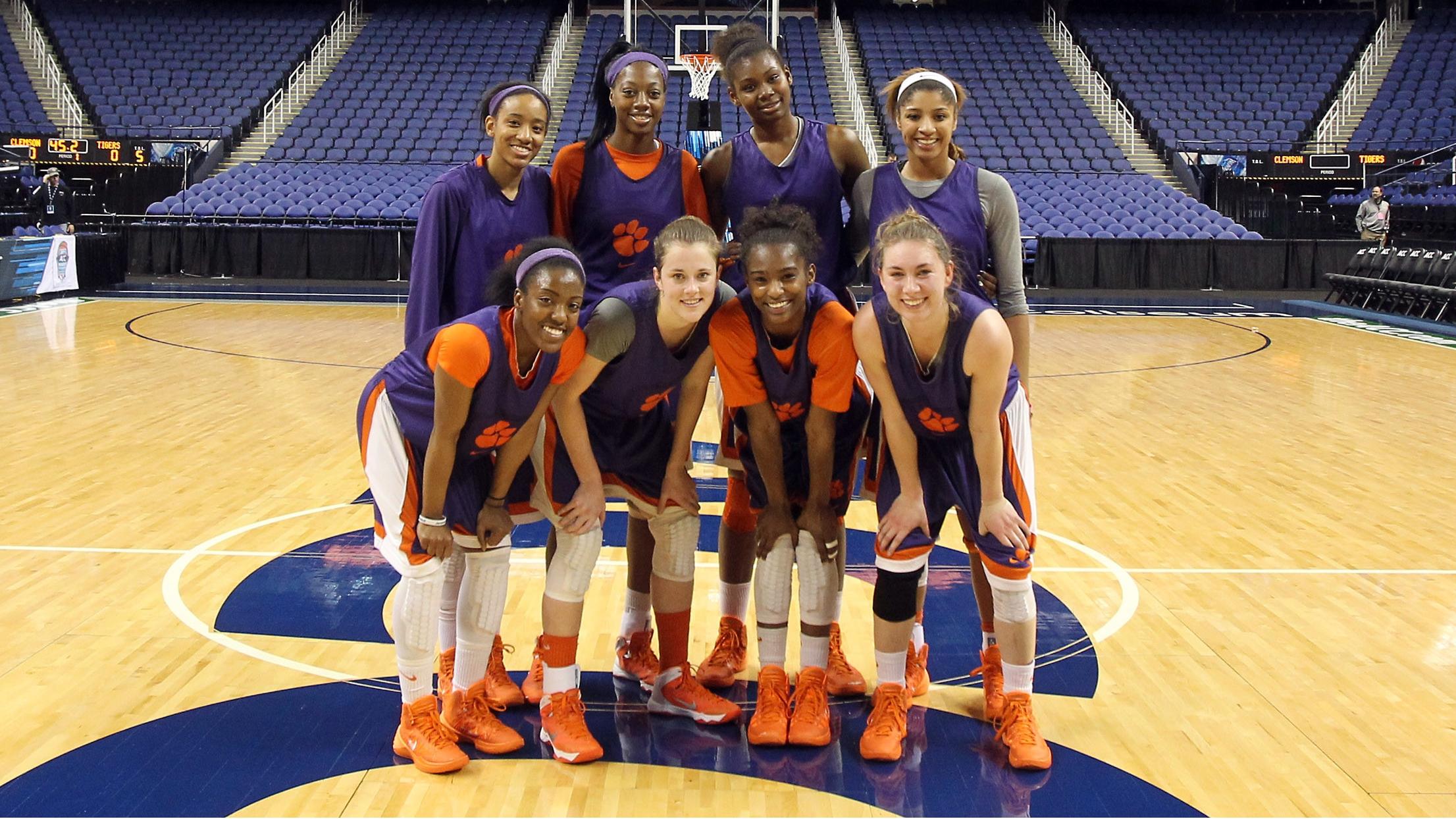 GREENSBORO, NC – If Clemson wins its opener Wednesday at the ACC Women’s Basketball Tournament, it will be back in action Thursday morning in the first game of the second round, meaning the Lady Tigers would have played twice before eight teams in the field have laced up their high-tops. Even with only eight players at her disposal, that suits Audra Smith just fine. “The bottom line is you have to gut it out,” the first-year head coach said. “Of course we’re going to be shorthanded, but we’ve been shorthanded all year. The beauty of conference tournaments is anything can happen. You just have to go out and relax and just play.” Thirteenth-seeded Clemson will open at 1 p.m. at the Greensboro Coliseum against 12th-seeded Virginia Tech, which is also the Lady Tigers’ most recent opponent. The two teams met Feb. 27 in Blacksburg, Va., and the Hokies rolled to a 74-48 win, which has led Smith to try a different approach this time around. “The players put together their own scouting report on them the past few days,” Clemson junior sharpshooter Kelly Gramlich said, “and we’ve just been focusing on what we did wrong and what we need to do against them to prevent (Uju) Ugoka and (Vanessa) Panousis from getting off. So we’re ready. We know we can win.” Six-foot-1 forward Ugoka went for 23 points and point guard Panousis chipped in 13 as the Hokies outrebounded Clemson 45-25 in the regular-season finale and pulled away for the win. Typically the coaching staff puts together the scouting report for every game, but after the players didn’t execute it well enough in the last contest with the Hokies, Smith had the players get together, watch the film from the game and make their own scouting report this time. The players analyzed the game in terms of keys to victory, personnel and matchups, and even drew up the plays themselves. “We did it all, so I feel like we’re more ready than ever because we literally had to do it ourselves,” Gramlich said. Gramlich said two things they gleaned from breaking down the game is they needed to compete harder and be more aware of the players Virginia Tech has on the floor and what their strengths are as individuals. “For example, Panousis, we need to be right up in her face at all times because she’s going to put it up,” Gramlich said. “And Ugoka killed us with offensive rebounds, so we’ve got to box out and we’ve got to know where they are. So we know more than ever what we need to do for this game.” Should the Lady Tigers (12-18) win, they would advance to face fifth seed Syracuse on Thursday morning with the winner then moving onto face fourth seed N.C. State on Friday morning. Clemson played three games in three days during a tournament in Las Vegas earlier this season, and Smith said the experience could give her players an idea of what to expect. “Anytime you have to play back-to-back is very taxing when you have a limited number of players,” Smith said. “But that’s the nature of the beast when it comes to tournament time. It’s the old cliché of ‘survive and advance.’ For us, we have to get past Virginia Tech first, and then we’ll worry about getting as much rest as we can and tackling Syracuse the next morning.” Junior wing Nikki Dixon leads the Lady Tigers in scoring at 13.3 points per game and has reached double figures in 15 of her last 19 games, while senior post Quinyotta Pettaway is also averaging in double figures scoring (10.0) and is the team’s leading rebounder (6.4). “Nikki and Quinyotta have played significant minutes in this tournament over (their careers),” Smith said. “This is an opportunity for them to really step up and be significant offensive factors for us — because they’re our two top scorers and they can do a lot for us on the offensive end.” Point guard Chelsea Lindsey and senior guard Chancie Dunn will also be expected to play big minutes against Virginia Tech, particularly with versatile junior Charmaine Tay back home with an Achilles tendon injury. “Chelsea is going to have to play a ton of minutes — as she’s done all year — and lead the attack in terms of running the offense,” Smith said. “Chancie is going to have to back her up at the point position and give her some rest here and there, and I’m hoping the other players can step up and play a significant role on the offensive and defensive ends in terms of doing their part.” Clemson has not won a game at the conference tournament since it advanced to the quarterfinals in back-to-back years in 2008 and 2009. Dixon admitted it would be a huge steppingstone for the program to be able to end that drought. “It would mean the world, especially to our seniors,” Dixon said. “They’ve been through a lot in their four years, having the coaching changes and people leaving. They’ve been through a lot of adversity, and I’ve been part of it too.  “I feel like it would mean a lot to us, even making it past the first round, because we have been through so much, and it’s time we get rewarded for it.” While few outside the locker room likely expect the Lady Tigers to hang around in Greensboro for very long, Dixon said the team itself has designs on staying awhile. “We packed our bags for all the way until the end of Sunday,” Dixon said with a big smile, “so that’s how long we’re planning on staying.”