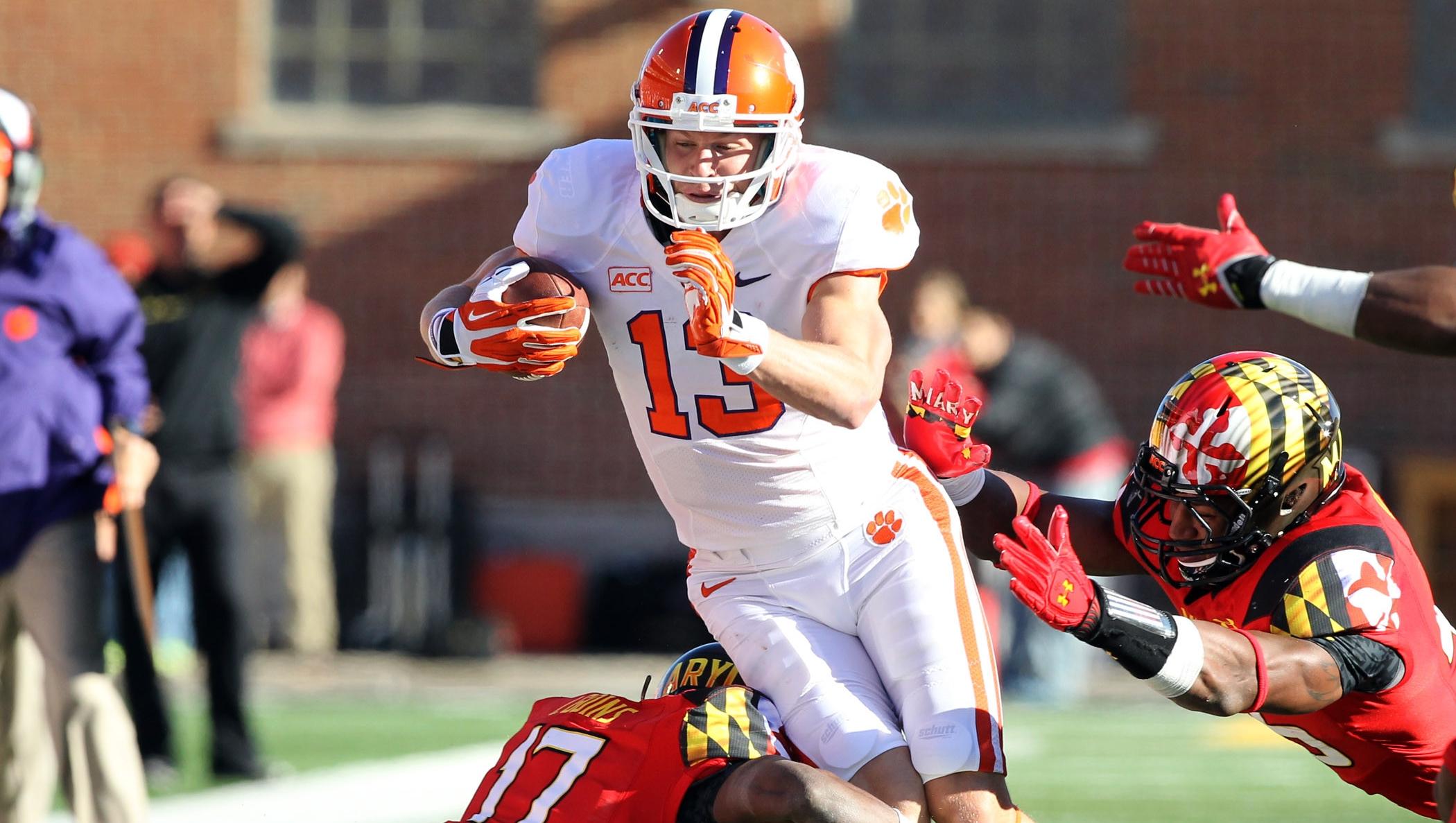 CLEMSON, SC – Some eyebrows raised when Dabo Swinney said earlier this year he believed Adam Humphries would have a lengthy NFL career and again when Sammy Watkins expressed the same sentiment this week.

Humphries himself had a similar reaction when told what his teammate said.

“Really? That’s cool,” he said with a laugh. “Hearing that from another player who is obviously going to have a long career in the NFL, it means a lot, from all the hard work that I’ve gone through from my freshman year all the way up until now.”

Clemson held its fourth of 15 allotted practices for the Jan. 3 Orange Bowl against Ohio State on Wednesday, and Humphries said afterward a pro career was not on his radar when he arrived on campus in 2011.

“Coming into college I never thought about it, but as I grew in the system and continued to perform on the field, it obviously was in the back of my mind,” he said. “Now that people are saying it, I guess it’s something that I would like to do and I’m going to keep trying to work to get there.”

Unlike some of the Tigers’ other top receivers, such as Watkins and junior classmate Martavis Bryant, Humphries gave no indication he is considering a jump to the NFL after this season. Yet Humphries is second only to Watkins on the team with 41 catches, which he has parlayed into 483 yards and two touchdowns.

Regardless of the decisions of some of his mates in the receiving corps, Humphries believes the talent pool will be deep at his position group next season.

“We’ve got a lot of talent,” he said. “Obviously Mike Williams is making big plays. We will have Charone Peake back, and we all know what he can do. Germone Hopper is rising up as a redshirt freshman. With the wide receivers coming in the spring, we’ll see what they can do and I think we’ve got a bright future at the wideout position.”

Watkins is projected by many analysts to become Clemson’s second first-round pick at wide receiver in as many years – after DeAndre Hopkins went 27th overall to the Houston Texans this year – and if that happens, Humphries admitted there would be big shoes to fill next season.

And what about playing without three-year starting quarterback Tajh Boyd?

“That’s a crazy idea, man,” Humphries said. “That’s the first time that’s come into my head. But just like the receivers, we’ve got a lot of talent at the quarterback position.

“Chad (Kelly) makes plays, Cole (Stoudt) makes plays and even Nick (Schuessler) can make plays, and we’ve got Deshaun Watson coming in, so it will be a fun battle to watch in the spring and see what happens.”

A junior from Spartanburg, SC, Humphries is also Clemson’s primary punt returner, as he has handled 20 of the team’s 29 punt returns on the season and averages 10.6 yards per return with a team-best long of 45 yards.

While he has had success with those duties, his most recent performance wasn’t his best, as Humphries was charged with a pair of fumbles in a loss to South Carolina.

“You have to put that out of your mind,” he said. “One was just a freak accident with it hitting another player, and then one was pretty much all my fault. But you’ve just got to put that behind you and learn from it. I could just simply make a fair catch call and none of that would have happened. But those are things you put behind you and just move on. It’s a good learning experience for me.”

As for the next game, Humphries and the other components of Clemson’s air attack appear to have a favorable matchup with the Buckeyes, who rank 104th nationally in pass defense at 259.5 yards per game.

Statistically, the Tigers have faced just one defense all season, Boston College, which has been less successful against the pass.

Clemson, meanwhile, ranks 12th in the nation in passing offense at 329.3 yards per game and eighth in completion percentage (.684).

“If we’re clicking, we can play against anybody, so – just continue to do what we do and make big plays down the field,” Humphries said.