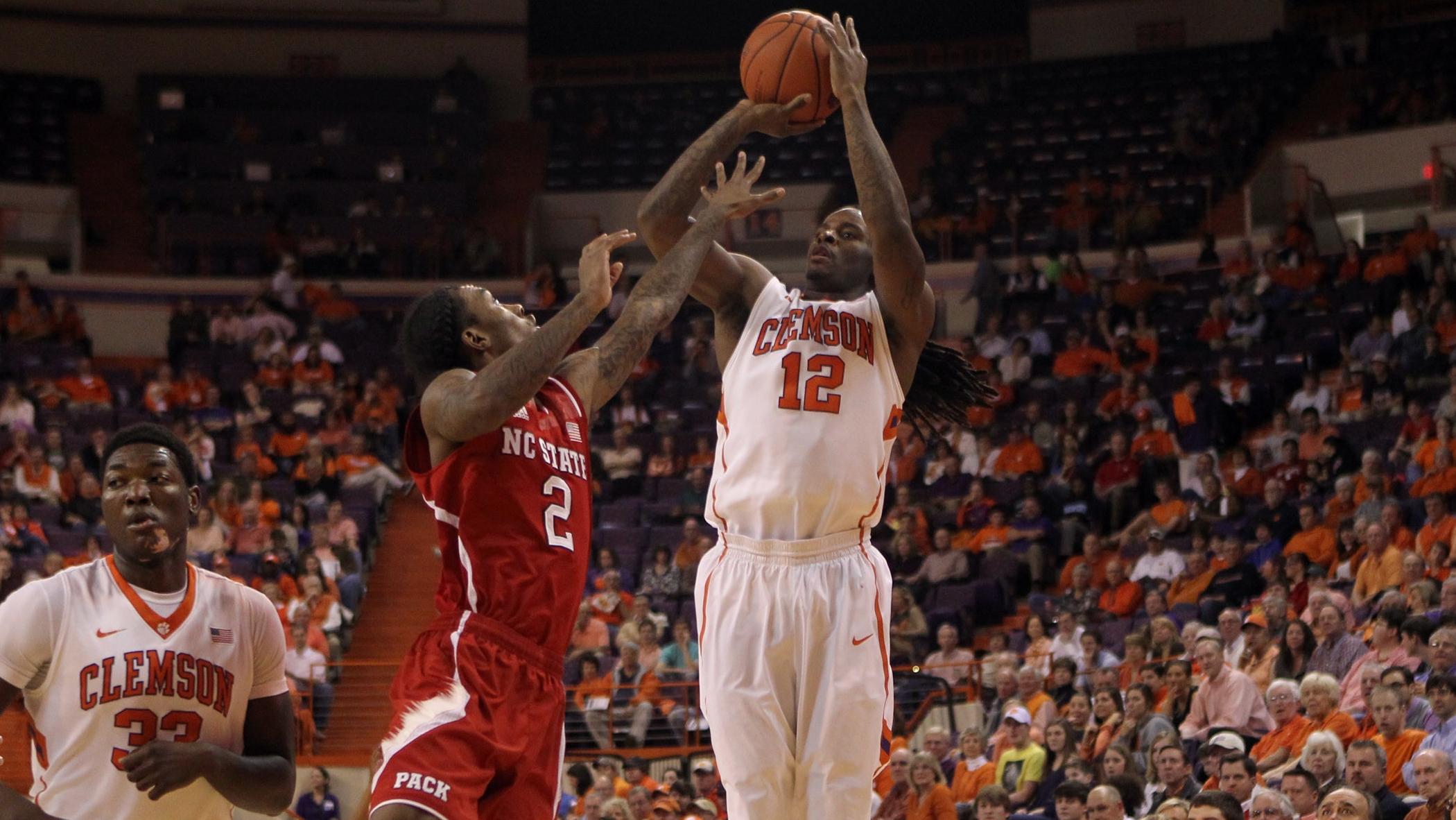 The Tigers had long been searching for support for star K.J. McDaniels in the scoring department, and his junior classmate Hall provided it in spades against NC State.

Hall had the Tigers’ first five points and a team-high 10 in the first half, and his early confidence spread like wildfire, as eight Tigers scored in the contest and six finished with at least seven points in a 73-56 win at Littlejohn Coliseum.

“I just tried to get everybody going,” Hall said. “They feed off each other’s energy, so I just took what the defense gave me and made plays, and everybody else followed.”

The junior from Augusta, GA, finished with a career-high 20 points and added two assists, and Clemson (16-9, 7-6 ACC) moved back above .500 in conference play.

It was just the seventh time this season someone other than McDaniels led the team in scoring and only the second time that someone has been Hall.

McDaniels may not have led the team in scoring, but he certainly did his part, adding six blocks – three against NC State star T.J. Warren – and four rebounds.

Perhaps more importantly, the Tigers secured just their second victory of the season over a team currently ranked in the top 60 nationally in the RPI to add a crucial quality win to their NCAA Tournament resume.

Damarcus Harrison and McDaniels finished in double figures with 14 and 12 points, respectively, while Landry Nnoko added nine and Jaron Blossomgame and Adonis Filer each had seven.

“They tried to do a lot of things to take K.J. out – box-and-one, triangle-and-two – and when those things happen, your other guys have got to step up and make plays,” Head Coach Brad Brownell said. “We can do some things as coaches to try to help K.J. out, but at the end of the day, when those are your options, they’re forcing your other guys to be playmakers.

“Adonis (Filer) made shots, Damarcus was good, Landry was certainly a factor, and I thought our guys just played well.”

Hall wasted no time heating up, scoring the first five points of the game to stake the Tigers to a 5-0 lead barely a minute into the action.

“It put us in attack mode,” Harrison said. “He’s our leader, our point guard, he’s our floor general, and when he gets off to a good start, we know we’re going to have a good night.”

The Tigers pounced on the ‘Pack early, as six Clemson players contributed to their first 17 points, and only two of them came from McDaniels, who had carried more than his fair share of the scoring load in recent weeks.

After a Tiger steal, Hall drove hard to the hole, finished with a layup, drew a foul and made the free throw to stretch the lead to double figures for the first time at 26-14. But the Wolfpack closed the first half on a 19-6 spurt to turn a 12-point deficit into a one-point lead, as Warren laid in a basket just before the halftime buzzer to give NC State its first lead of the game, 33-32.

Hall was back in the act to start the second half, driving to the hole for a basket to put the Tigers back on top just 41 seconds after the break.

The 6-foot-1 junior’s bucket helped spark a 9-0 run out of the locker room for the Tigers, as they took a 41-33 lead after a layup by Harrison.

“Coach (Brownell) got on us at halftime because we try to feed off our defense,” Hall said, “so he got after us, and it led to our transition and got us easy baskets and free throws.”

With the Wolfpack trying to rally, Hall’s jump shot with 7:36 left restored the Tigers’ lead to double digits, 60-49.

“I didn’t know it till the last two free throws when Damarcus was messing with me about it,” Hall joked of the career high.

Hall came into the game as the Tigers’ second-leading scorer at 8.8 points per game, and he’d scored in double figures 12 times this season. But he had reached double figures just once in the last eight games, and Assistant Coach Earl Grant urged him before the game to be more assertive on offense.

“That was all me and Coach Grant were talking about: just me being more aggressive and taking more chances with the ball,” Hall said. “So I just did it.”

With Hall matched up against a smaller point guard, 5-foot-11 Tyler Lewis, Brownell said the game plan was to get Hall involved in the offense early.

“He needs to be able to do that against certain teams,” Brownell said, “and this was one where we felt like he could help us get off to a good start – and he did.”

The floor leader has been known for getting his teammates involved and protecting the ball – he entered the game ranked fourth in the ACC in assist-to-turnover ratio with 91 assists to only 32 turnovers.

On Tuesday, he got himself involved too, and the result pretty much speaks for itself.