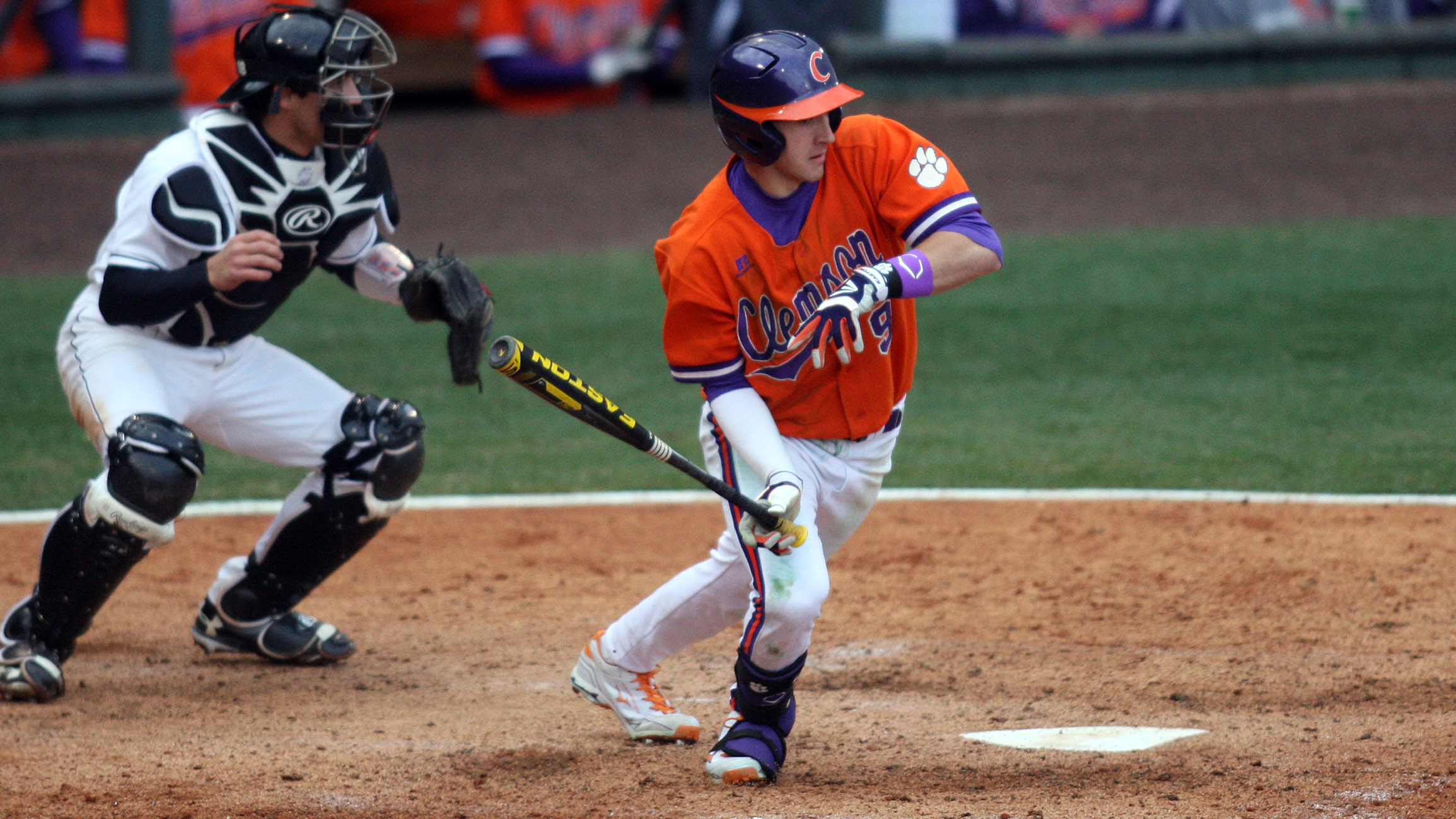 GREENVILLE, SC – Jack Leggett said before the season Clemson’s freshmen would be critical to its success. Saturday at Fluor Field, a trio of them led the Tigers to easily their biggest win thus far.

Clate Schmidt pitched 7.0 strong innings and retired 11 straight batters at one point, and Steven Duggar and Tyler Krieger each had two hits as Clemson bounced back to defeat rival South Carolina 6-3 and force a rubber game Sunday in Columbia.

“We’ve got some very exciting freshmen,” the Tigers’ head coach said. “We’ve known that since the very beginning.”

Duggar, batting fifth in the order for the first time, singled to right-center to lead off the second inning. Next, Garrett Boulware ripped a drive into the left-center field gap for a double that brought Duggar around with the game’s first run.

“I was fortunate to get a (breaking ball) down and in,” Duggar said, “and was able to put it in the gap for a single and got our offense rolling a little bit there.”

Later in the inning, Krieger, a switch-hitting shortstop from Johns Creek, Ga., lined a single into right field to score Boulware and make it 2-0.

After working around some trouble in the bottom of the frame, Schmidt – a product of Acworth, Ga., who was drafted in the 36th round by the Detroit Tigers last June – retired the South Carolina side in order in both the third and fourth innings.

Krieger got something brewing in the fifth with a one-out single to left, and Thomas Brittle lined a base hit into right to allow Krieger to motor around to third.

With two away, Steve Wilkerson singled through the left side to score Krieger, then Shane Kennedy walked to load the bases for Duggar, who came through with a hit back through the box to put the Tigers on top 5-0.

“I was just looking for a good pitch, a pitch I could handle, and I got a fastball on the outer half and was able to put it back up the middle for a couple of runs,” Duggar said.

Schmidt mowed down the Gamecocks again in the fifth, giving him three straight 1-2-3 innings – and 10 consecutive batters he had retired – at that point.

Max Schrock broke Schmidt’s streak after he had retired 11 in a row with a homer to right field, and L.B. Dantzler made it back-to-back home runs to make the score 5-2. But with the Gamecocks looking to rally back into the game, Schmidt struck out Joey Pankake and Grayson Greiner to end the sixth inning.

“My cutter was working really well, and I was making sure my fastball was down in the zone,” Schmidt said. “I let two of them get away, and they put good hits on them. But everything else was just working off the cutter.”

Leggett stuck with Schmidt even after two were on with one out in the seventh, and he got Graham Saiko to ground out to short – on a charging pick by Krieger – and then fanned Vergason to end the inning.

The first Gamecock batter after Schmidt departed drew a walk off Matt Campbell to lead off the eighth, but Krieger helped turn a 4-6-3 double play to erase the runner.

“He’s just been playing very steady defense,” Leggett said of Krieger. “He’s calm, he’s collected, under control, he’s poised, and he’s mature. He’s giving us a little more offensively … and I think he’s going to be a real good player for us.”

The twin killing turned out to be all the more important when the next two batters, Pankake and Greiner, both doubled to make the score 5-3. But Campbell struck out Dante Rosenberg to end the threat and preserve the Tigers’ two-run cushion going into the final frame.

For the game, Schmidt (2-0) went 7.0 innings, allowing five hits and two runs, both of them earned, and striking out five against three walks.

“He’s getting a lot of confidence,” Leggett said. “He threw his breaking ball for strikes today any time he needed it, and was throwing the ball down in the zone. They had two good swings on him; other than that I thought he was pretty much in control.”

“We do have some really talented freshmen who have good attitudes and who work extremely hard,” Leggett said. “They didn’t just show up on campus expecting to get handed something, and I think the older players respect that.”