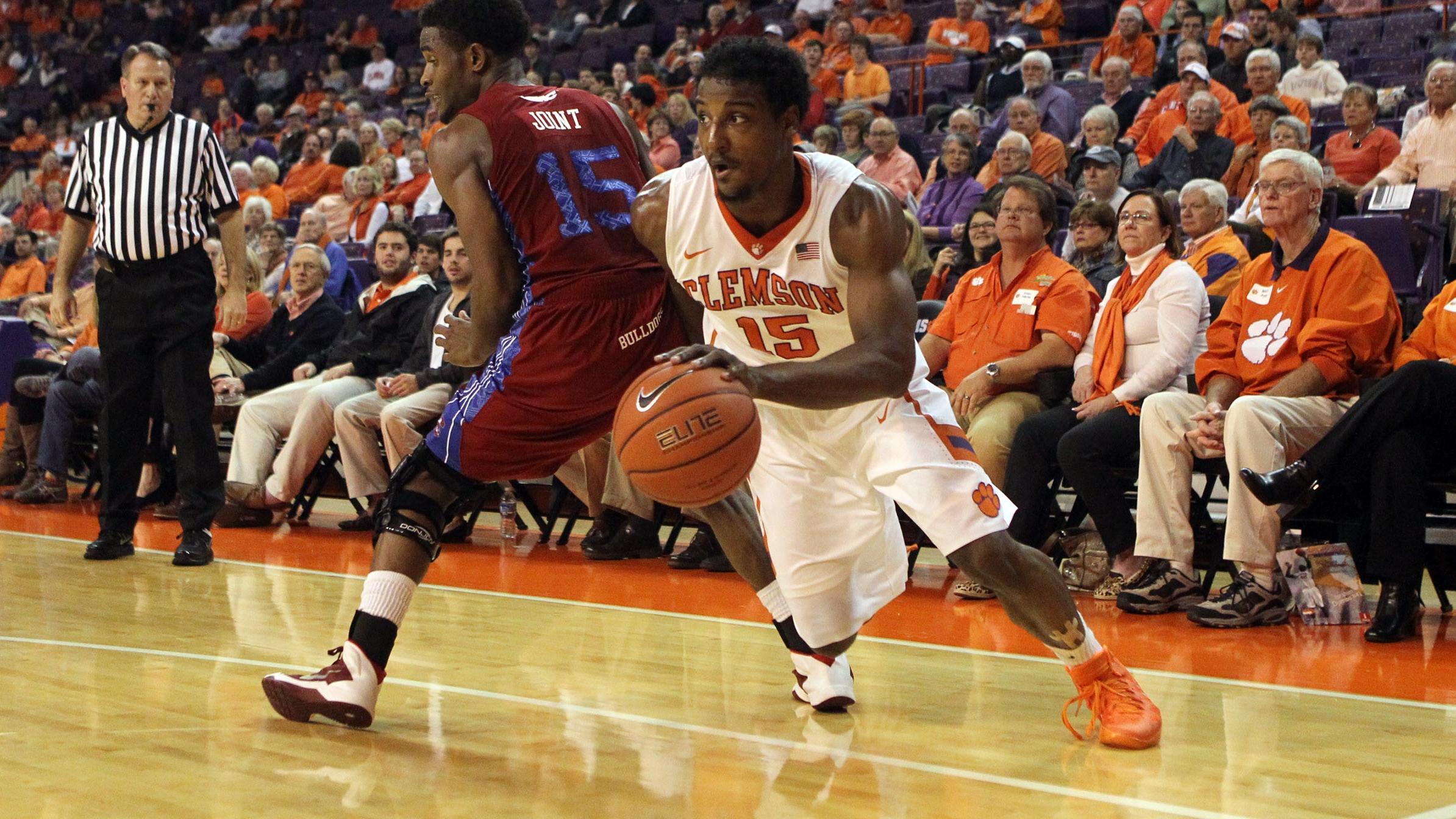 CLEMSON, SC – Devin Coleman probably would have been Clemson’s starting two guard last season if not for injury, and he wasted no time settling into the lineup when his opportunity came around again.

Making his first career start, the red-shirt sophomore scored a career-high 16 points to lead Clemson to a 65-49 win over South Carolina State on Tuesday at Littlejohn Coliseum. It was the third straight double-digit scoring effort for Coleman after he didn’t score in the first five games this season.

But in his typically even-keeled manner, Coleman wasn’t ready to concede anything was particularly special about his performance.

“I’m trying to stay confident at all times, really, and when I get in just play basketball the way I know how to play,” he said. “Play hard, and all that other stuff will come together for you.”

South Carolina State (2-6) scored the first seven points of the contest and eventually opened a double-digit edge at 18-8 nearing the midway point of the first half.

All told, the sharpshooter from Philadelphia scored 16 of the Tigers’ first 25 points to keep the game close while the rest of the offense was sputtering.

“We looked a little sluggish in the beginning,” Coleman said. “I think the score showed that, so I just wanted to bring some energy and try to be aggressive and get into the flow of the game.”

Coleman didn’t score after halftime, but really didn’t need to – as Clemson led by as many as 18 and cruised to the win, and he still finished as the game’s leading scorer.

Coleman played only 20 minutes total in the team’s first five games and didn’t score in any of them. But during the championship game of the Charleston Classic he came off the bench late to score 10 points across the final eight minutes and nearly propel the Tigers to victory in their only loss of the season to UMass.

“Same thing as the last couple of games, I got some open shots because of my teammates’ penetration and kicking,” Coleman said. “Starting or coming off the bench, it doesn’t matter. As long as I can continue to play hard, I think I’ll be fine.”

The 6-foot-2 scoring guard played sparingly most of his freshman year, but came on strong toward the end. He averaged 6.8 points per game over the final eight outings that season, including 15 points in the ACC Tournament against Virginia Tech.

“Devin’s strength as an offensive player – and he’s always been like this – is his poise,” Head Coach Brad Brownell said. “And that’s why it was really surprising to our staff that he struggled as long as he did offensively as a freshman. He didn’t play as much because he really wasn’t very good defensively, but the fact he didn’t make a basket for a long time was mind-boggling because he made baskets all the time in practice.”

Coleman appeared poised to be among the Tigers’ primary scorers a year ago, but tore his Achilles tendon in a summer workout and missed the entire season.

“Devin Coleman was a huge loss to last year’s team – huge – because he plays with poise and he shoots,” Brownell said. “And we needed poise and shooting. I really believe he would’ve been our starting two-guard last year.

“It’s funny because, as a red-shirt sophomore, why wasn’t he starting until now? Well, because Jordan (Roper) got better, Damarcus (Harrison) got better, and now we have a lot of guys. But Devin plays the game with offensive confidence.

“When he catches it off a screen, a one-dribble or two-dribble pull-up jumper is pretty easy for him. And it should be pretty easy for other guys, but there’s just a sense for scoring that he has. When he really gets locked in, that’s when he plays pretty well.”

After taking some time to work his way into the rotation, Coleman has now turned in three of the four double-figure efforts in his career in succession, including his best performance to date in his first start Tuesday.