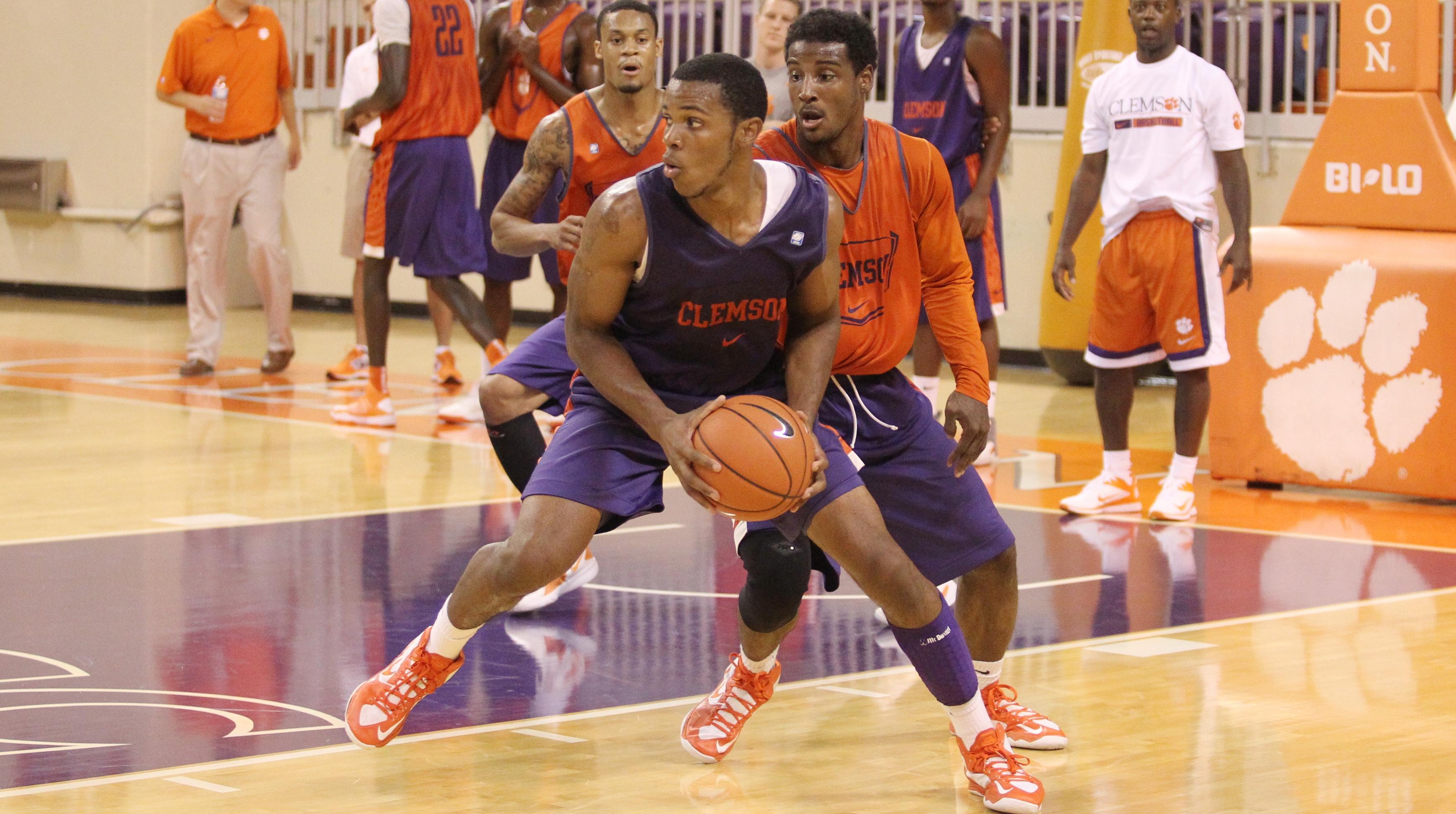 CLEMSON, SC – The pain came later. Both Jaron Blossomgame and Devin Coleman realized much sooner they would not be playing the game they loved for a long time.

For Blossomgame, the realization came as he lay flat on his back and looked down at his shin – or where his shin used to be. What he saw instead was the jagged edge of a bone sticking out with his basketball shoe hanging behind.

“I looked at my trainer and said, ‘Am I going to be alright?'” Blossomgame recalled. “And he was like, ‘Yeah, just don’t look at it.’ I didn’t have any pain in the beginning. I was just sitting there thinking, ‘Man, is my career really over?'”

Coleman was running wind sprints from one end of Littlejohn Coliseum to the other when his ankle gave way. As he went to the floor and tried unsuccessfully to get up, he reached for his Achilles tendon and found the problem – it was no longer there.

Blossomgame and Coleman both sat out the entire 2012-13 season for the Clemson basketball team, and they admitted they formed quite a bond in the process.

About the only thing they did get to share with their teammates was the pain of the losses.

“We didn’t play, but we’re still a part of the team. Those guys are still our brothers,” Coleman said. “We work every day with them and see them every day. So, you definitely can feel it. I think we felt it just like anyone else, as if we did play.”

Making things more difficult for Blossomgame and Coleman was the fact the Tigers struggled to a 13-18 finish for the season, and both could only sit and watch, both feeling they could have made a difference if they were healthy.

“It’s definitely tough being on the road at some games, which we lost a lot of those games,” Blossomgame said. “And it’s the thought, ‘I know I could benefit the team in many ways if I were healthy.’ It’s tough to see the team struggle like that on the road, knowing that Devin and I could have helped produce on both the offensive and defensive ends.”

They will get their opportunity very soon.

Blossomgame’s injury was a more arduous ordeal than just sitting out the season. After breaking his leg during a workout after his senior year of high school, he had to wait patiently during his freshman year at Clemson while it healed. But once he was finally was cleared to return to practice last January, the pain never got better.

After only a few months of practicing with the team, Blossomgame went back for a second surgery to help the injury heal completely.

“I was actually relieved at the second surgery because I got to the point where I wondered if I really wanted to keep doing this – practicing and lifting – if my leg is hurting me this bad,” Blossomgame said. “I was relieved to learn that the doctors could actually do something else to help me. I told my mom, ‘I have to get this surgery so I can start playing again like I used to.’ And she was all for it.”

With the Tigers set to play an exhibition game at 7 PM Friday at Littlejohn against Francis Marion ahead of the season opener next week with Stetson, Blossomgame said Wednesday he is finally back to 100 percent.

“I have no more pain like I used to get, the small pain,” he said. “That’s completely gone. I’ve been trying to dunk on people every day. I’m back to my normal self.”

The 6-foot-7 red-shirt freshman has been working at the power forward spot, where is he competing for the starting job with 6-foot-10 junior college transfer Ibrahim Djambo, and also working some at small forward behind K.J. McDaniels.

“(Djambo and I) go head-to-head in practice every day,” he said. “I pressure him on the perimeter, and he pressures me. We both make shots; we compete. It’s just really fun. He’s really consistent on making threes and making jump shots. He’s a really great player in my eyes.”

As for Coleman, his injury could hardly have come at a worse time. It happened during a summer conditioning session after his freshman season, which he had finished in such promising fashion.

A scoring guard by trade, Coleman averaged just 2.6 points per game as a freshman, but averaged 6.8 points over Clemson’s final eight contests and posted a team-high 15 points in the first round of the 2012 ACC Tournament against Virginia Tech.

“It made (the injury) a lot more frustrating at the time,” Coleman said. “There was a little period there where I was mad and frustrated, but after a while, you’ve just got to accept it for what it is and focus on the future.”

For the red-shirt sophomore from Philadelphia, the future is competing for a job as the Tigers’ starting shooting guard with junior Damarcus Harrison and sophomore Jordan Roper.

Coleman admitted he, like everyone else, wanted to play the most possible minutes, but sounded genuine when he said he was happy with whatever role head coach Brad Brownell saw fit for him.

“You get a new perspective with sitting out for a year,” he said. “I just want to get out there and do whatever I can do.”

With that, the Tigers are just as excited to have Blossomgame and Coleman back at their disposal this season.

“Devin has been shooting the ball at a very high level in practice, and he has been looking pretty good to me,” Blossomgame said. “And I think I’ve been getting back pretty well, so we both know we can help this team. And based off of scrimmages and off of practices, we have been.”