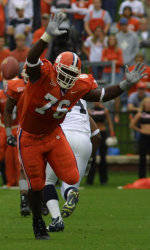 OFFENSIVE BACK Virginia Tech tailback Mike Imoh was a unanimous pick for ACC Offensive Back of the Week after setting a school single-game rushing record with a 32-carry, 243-yard effort in the Hokies’ 27-24 win at North Carolina Saturday. Both totals, along with two rushing touchdowns, are career highs for the 5-7, 196-pound junior from Fairfax, Va. Imoh also had a reception and finished the game with 294 all-purpose yards.

OFFENSIVE LINE Virginia center Zac Yarbrough was tabbed as the ACC Offensive Lineman of the Week for his performance in Saturday’s 16-0 win over Maryland. Yarbrough, a 6-4, 276-pound senior from Winter Park, Fla., anchored an offensive line that paved the way for 409 total offensive yards, including 295 yards rushing.

DEFENSIVE LINE Clemson defensive tackle Eric Coleman and Virginia linebacker Ahmad Brooks were selected as co-Defensive Linemen of the Week. Coleman registered his first career two-sack game in Clemson’s 24-17 overtime triumph at 10th-ranked Miami Saturday. The Charlottesville, Va., native had six tackles for the game and his two sacks were for 18 yards in losses. Brooks had a team-leading six tackles in Saturday’s 16-0 win over Maryland. The Woodbridge, Va., sophomore also had two QB pressures and two crucial interceptions, the first of his career.

DEFENSIVE BACK Georgia Tech cornerback Reuben Houston grabbed two interceptions, both setting up two touchdowns, in the Yellow Jackets’ 24-14 ACC road win at NC State. The Peachtree City, Ga., junior also had two tackles and was part of a strong effort by the Tech defense, which allowed only one offensive touchdown.

SPECIAL TEAMS In his first game as the starting placekicker, Florida State’s Gary Cismesia was a perfect five-for-five on field goal attempts and two-for-two on point after touchdowns in the Seminoles’ 29-7 win over Duke Saturday. The Bradenton, Fla., freshman tied a school record for field goals in a game, making good on attempts from 23, 29, 27, 40 and 43 yards.

ROOKIE Georgia Tech tailback Rashaun Grant rushed for 122 yards on 20 carries to lead the Yellow Jackets to a 24-14 ACC road win at NC State Saturday. Tech’s third-string tailback, Grant, a 5-10, 192-pound freshman from Tampa, Fla., stepped in after injuries to P.J. Daniels and Chris Woods and totaled the 122 yards against a Wolfpack defense that was allowing just 108.8 yards rushing per game and was ranked third in the nation in total defense.