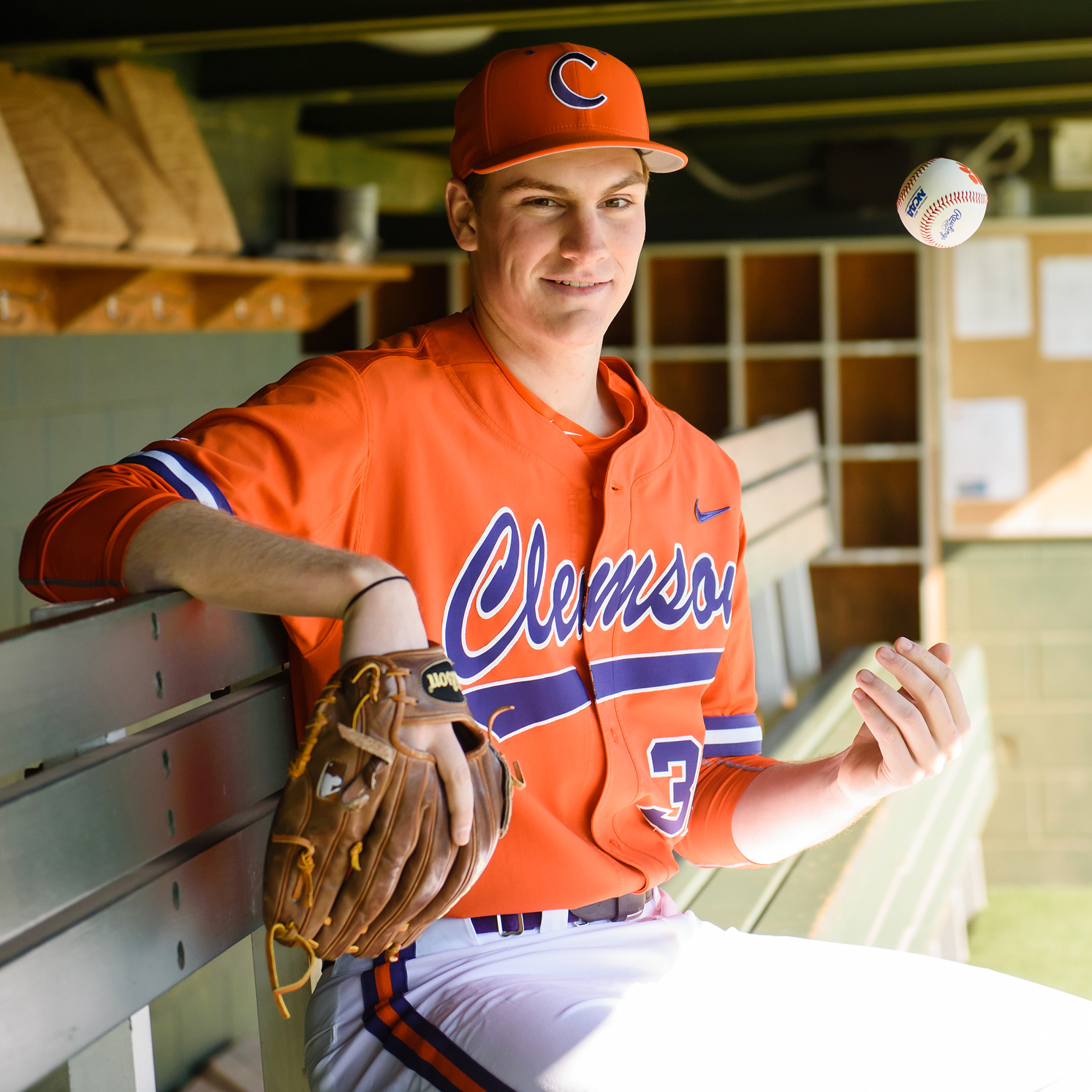 The score was tied 1-1 in Clemson’s key rubber match against NC State on May 8, 2016 when Pat Krall, looking to go the distance in his first career start, came out of the dugout for the top of the ninth inning and promptly gave up a leadoff double.

It was a moment that the lefthander remembered distinctly. It was memorable because there was only one thing running through Krall’s mind when NC State center fielder Josh McLain slid into second base.

No anxiety, just excitement. For Krall, 2016 was a year of falling in love with the game of baseball again, and he believes that his outing against NC State was a perfect example of that.

“I really fell in love with playing again,” he said of last season. “I know that’s easy to say after having a good year, but even in the times when I wasn’t feeling my best or pitching my best, I had a different mentality about it…I get to play every day, and whether it’s good or bad, I’m just going to play.

“Even when I had good games, there were always those situations. I remember most the ninth inning in the game I pitched against NC State, and they led off the inning with a double.

“No outs, my first career start and my mom is in the stands, and it wasn’t like ‘oh my god, don’t let them score.’ It was ‘here we go. This is a moment that baseball is all about. Just have fun with it. It’s going to work out, as long as you believe in yourself.”

And it did work out, as Krall held the Wolfpack scoreless and set the table for Weston Wilson to hit a walkoff single in the bottom of the frame.

Shutdown appearances like that were characteristic of the Southpaw throughout 2016, and he ended the season leading the team in ERA (1.67), wins (10), saves (5), strikeout-to-walk ratio (3.82) and opponent batting average (.203) among other categories. Such numbers earned him the title of first-team All-American by Perfect Game, and equally strong performances in the classroom made him the first Tiger to ever be named ACC Scholar-Athlete-of-the-Year.

But Krall’s journey to national recognition with Clemson was far from ordinary. Originally a member of Temple’s baseball squad, Krall was faced with the reality of the school disbanding its program following his freshman season.

“Temple told us they were disbanding the Friday before finals week of my first semester,” he remembered. “It was weird. It was like high school recruiting, part two, but only at the college level. We had a choice to leave before that season, or we could leave after the season with no penalties. I chose to stay because we had a couple of key guys leave, so it opened up a spot for me.

“I wasn’t really going to have a big role my first year, because I didn’t have the best fall. But I decided to stay and try to showcase what I have to other teams so that I could have better opportunities than I did out of high school, and it worked out really well. I had a good season, and I started reaching out to schools of Clemson’s caliber, and I started visiting. Ultimately, I decided on Clemson.”

Fast forward a few years as one of Clemson’s most reliable pitchers to the summer of 2016, and Krall was faced with another unique reality. What started as a regular trip to the Georgia Aquarium with his mother and girlfriend got sidetracked by a phone call from St. Louis. The Cardinals had selected the lefthander in the 28th round of the 2016 draft, and he had to decide between entering the professional ranks or returning to Clemson for one final season.

Fortunately for the Tigers, he chose the latter.

“It was definitely a weird feeling, and that’s the whole reason I came back,” said Krall. “You have a nervous feeling when you get drafted, but it’s not nerves as in ‘oh my god, what am I doing?’ It’s more of seeing it as a new step in your life. But my nerves and anxiousness centered more around whether or not going pro was the right thing to do.

“I have to give everyone that I dealt with in the Cardinals organization a lot of credit. They dealt with me in a good way and were very professional about it, and it was definitely a hard time, but I told them that coming back was just something that I needed to do. I didn’t want to go to them knowing I wasn’t going to be able to give 100 percent because I wasn’t fully into it. That’s how I knew.”

Krall also felt a sense of unfinished business that contributed to his opting to come back.

“Later that night, I realized that I couldn’t see myself not here this season. I feel like I still have so much left to do, whether that be school-wise or growing as a starter. I just have a little something left here, and not only would it not be fair to them because I can’t give it my all, but also to myself for not giving myself the best chance to make it at the professional level.”

Now that he’s back, the senior wants to contribute in any way he can on the field, regardless of whether his role is as a starter or reliever. He wants to help set the framework for a seamless leadership transition once he has donned the orange and purple for the final time.

“I’m going to try to be here and work with the Patrick Andrews and the ‘Rudy’ Coxs so that when we leave, the Brooks Crawfords, the Seth Beers and the other younger guys can step up, and even through the transition, the program stays the same. You don’t want to graduate and then have a setback because the leaders didn’t do a good job of showing the younger guys how to get things done on a daily basis.”

And ultimately, he wants to make sure the underclassmen understand and subscribe to a championship mentality.

“I think we’re going to win a championship this year. I think we have all the tools in place. We lost (Chris) Okey, we lost Weston (Wilson), we lost Eli (White), but I think with the way that coach (Monte) Lee has turned this program around so quick, not only do we believe we can win it, we know we can win it. That’s all we talk about. Our goal is winning that last game at the end of June.”