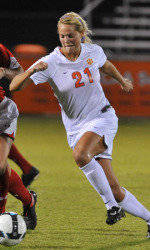 GREENSBORO, NC – Freshman forward Maddy Elder was named to the 2009 ACC All-Academic Women’s Soccer Team as announced by Commissioner John D. Swofford on Wednesday morning. The biological sciences major from Roanoke, VA led Clemson in scoring in 2009 with 10 goals and one assist for 21 points.

Elder was one of just four players in the Atlantic Coast Conference to have four multi-goal games in 2009. She finished the season ranked fifth in the conference in goals per game (0.56), eighth in points per game (1.17) and in a tie for eighth in goals (10).

To be eligible for All-Academic Team consideration, a student-athlete must have earned a 3.00 grade point average for the previous semester and maintained a 3.00 cumulative average during her academic career.